Arctic foxes are incredible animals that can survive extreme cold temperatures. Arctic foxes are also one of the popular animals among Arctic travellers. These foxes gain instant popularity due to their playful nature. What makes these small animals so remarkable? Here are some fun facts about Arctic foxes.

1. Their fur is a heat regulator.

Consistent body temperature is maintained by these foxes because of their very thick fur. In addition, their rounded ears, short legs and muzzle all reduce the surface area for heat loss. Their feet are also covered in fur!

2. They can live in extremely cold conditions.

Arctic foxes can endure temperatures as low as -70°C. The metabolism of these animals increases during these conditions and is crucial for survival.

Arctic foxes have a green or brown coat in the summer, which turns into a thick white one when winter arrives. 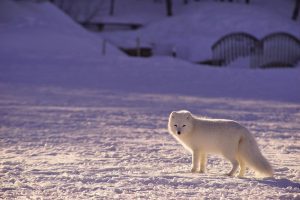 4. These foxes don’t have multiple mates.

They are monogamous animals as they mate for life!

5. An Arctic fox always has a plan.

As Arctic foxes are carnivorous, they hunt birds, rodents and even fish. However, prey can be scarce during winter, but they have a strategy for that too. They follow the footsteps of the polar bears and feed on the leftover scraps they leave behind.

6. They have plenty of predators.

Wolverines, red foxes, polar bears and golden eagles are some of the predators of Arctic foxes.

7. They don’t just live in the deepest Arctic.

Canada, Alaska, Norway, Russia, Iceland and Scandinavia are some of the habitats of the Arctic fox.

8. These foxes will traverse miles and miles for food.

Arctic foxes tend to travel substantial distances in search of food and are very mobile.

9. They have ancient hideouts.

These foxes live in burrows, which are sometimes hundreds of years old, dug by older generations of foxes. 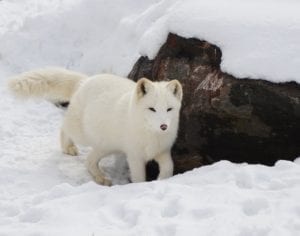 10. Arctic foxes can easily balance themselves.

The tails of Arctic foxes are approximately 13 inches long and are primarily used for balance and protection from the cold.

11. These foxes have amazing hearing.

The incredible hearing of an Arctic fox allows them to locate their prey precisely. In order to catch, they pounce on their prey. 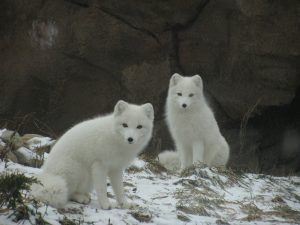 Is the Arctic fox going extinct?

The Arctic fox is sadly endangered, and it’s largely as a result of prey being very scarce.

It’s never a good idea to get up close to a wild animal, though Arctic foxes often play around for the camera a lot!

Can Arctic foxes kill you?

While not necessarily aggressive, the Arctic fox may carry rabies - for which there is no known cure, and which leads to painful fatality in humans.

Do you know any fun facts about Arctic foxes?  Share them in the comments below!