Mongooses look cute, but are also fearless when it comes to protecting their young! While their names may make them sound like birds, mongooses are feisty mammals that aren’t afraid of putting up a fight. Here are some fun facts about mongooses you may want to remember.

Though sometimes mistakenly used, the plural of this animal isn’t ‘mongeese’, it’s ‘mongooses’!

Mongooses are from the family Herpestidae. There are 34 species of mongoose – believe it or not!

3. How long do mongooses live for?

In the wild Mongooses live for an average of eight years. In captivity, they can live up to a relatively impressive 13 years of age. 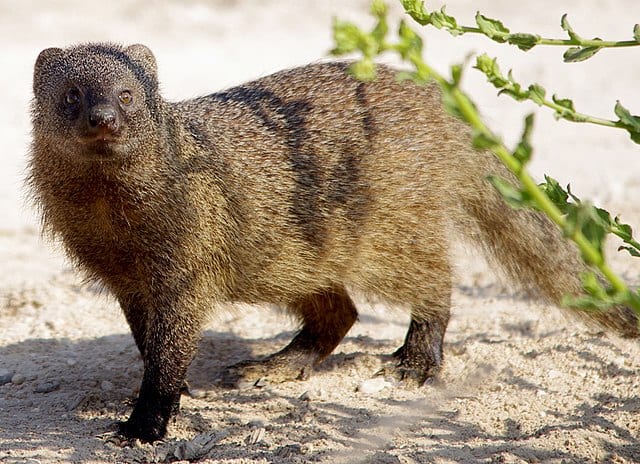 Mongooses are often known to punch beyond their weight! In defense of their young, they become fearless and will even fight venomous snakes! However, they are most fearful of humans – as adults, they will even try to attack people who venture too close. They will fight fearsome king cobras, too – which can grow to 12 feet long!

Mongooses have thick coats and can move swiftly. These two assets help them fend off would-be predators. They also have acetylcholine receptors, which help give them immunity to some venom.

6. Poindexters of the wild unite!

Mongooses are super smart. They organize communities and often occupy a territory of approximately four square miles. They then divide their territory in zones and live, reproduce and eat in one given area, then move on after a few days to the next zone where food is replenished. Clever stuff!

Mongooses use tools – and in particular hard surfaces – to crack open eggs to eat them.

They can also manipulate food in their forelimbs and can strike a pose in order to view an area, scouring for food, offspring, a mate or observe potential threats.

By sitting on their haunches, they can raise their height significantly from when they have four paws on the ground, too.

8. How do mongooses sleep?

Mongooses sleep at night and are active during the day. They sleep in burrows in the ground or amongst vegetation and in trees.

Mongooses are adept at climbing and many can scale trees easily with the same ease and grace as cats. 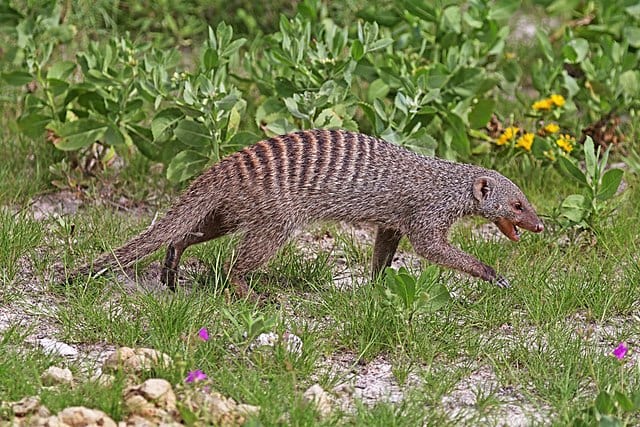 In 1883, mongooses were introduced to Hawaii for the specific aim of killing rats which had been decimating crops. Regrettably, the Indian mongooses, being diurnal, slept at night – which was when the rats came out! The plan thereby failed as the Mongooses killed birds instead!

Mongooses have evolved to develop some special features for life in the desert. A special membrane coats the mongoose’s eyes to protect them from abrasive sand. They can also close their ears when burrowing so sand doesn’t enter.

Mongooses have very fitting group names. Groups of Mongooses are known as ‘mobs’ or ‘gangs’. Better avoid them, then!

13. Mongooses are typically born with siblings.

Mongooses are usually born in the rainy season when food is plentiful. Mongoose Moms can have multiple litters in a year, and babies are known as ‘pups’. Gestation takes approximately ten weeks, and pups are born hairless, having between one and seven siblings. 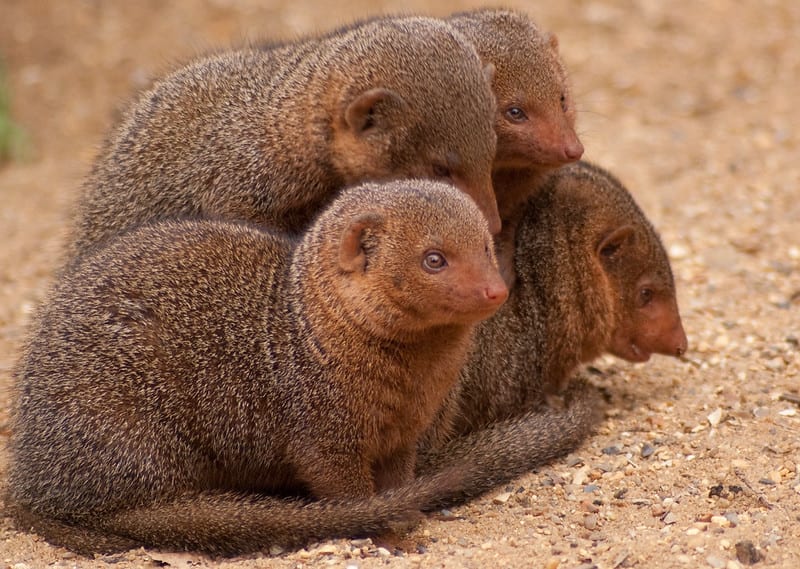 Are mongooses hunted for their meat?

Yes, mongoose meat is eaten in some parts of the world. However, mongoose meat can sometimes pass on infectious diseases such as leptospirosis. The first recorded incident of this was in 1886 and attributed to banded mongooses - try not to eat them if you can help it!

Do mongooses talk to each other?

Mongooses famously communicate together in their social colonies. They emit screeches or alarm calls when potential threats appear - when a predator comes on the scene, they emit a warning sound and disperse.

Where do mongooses live?

You’ll generally find mongooses living across Africa, though there are some that live across the south of Asia. You’ll normally find them on the ground, but some will live in the trees - and near water, too!

Do you know any interesting facts about mongooses? Share them in the comments below!