Octopuses are sea creatures that have fascinated, threatened and fed other species for centuries! Today scientists recognize their value in medical research and pioneering designs for human prosthetics, too.

These many-tentacled critters are certainly odd – so here’s some fun facts about octopuses worth getting a wriggle on for!

1. We named them all the way back in the 19th century.

In 1817, the English biologist William Elford classified these creatures as ’octopoda’. A year later they were given the name we know them by!

Some people refer to octopuses as octopi – but it’s actually incorrect! As weird as it sounds, ‘octopuses’ is the correct plural in English. 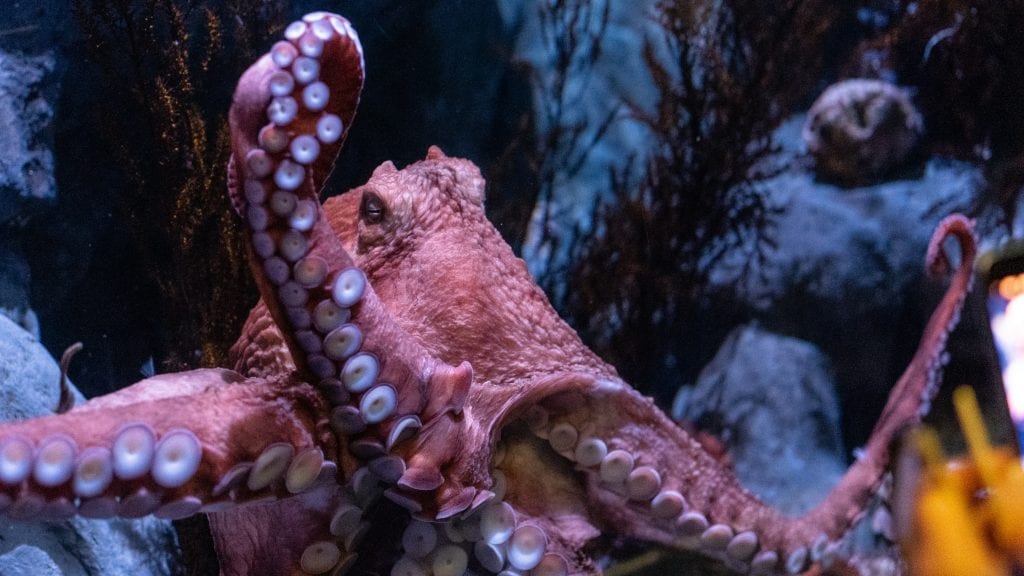 5. It’s to do with starvation.

Experiments have established why females die after eggs hatch. Taking several months to develop and hatch, female mothers don’t eat whilst waiting for their eggs – it’s a starvation period!

6. There are likely more octopuses than you think.

There are around 300 different types of octopus in the wild right now!

7. They come big and small alike.

They really do vary in size – some octopuses are as small as one inch long, while others grow to be more than 30 feet in length!

Octopuses are known to live in dens or burrow into mud and sand. Studies show they may lay here in wait for passing prey or to rest. They even return to home spots regularly too!

Scientists have discovered octopuses build using broken shells! They eat crabs and some other shellfish and break into them to feast. They have been seen to use their shell fragments to form walls! 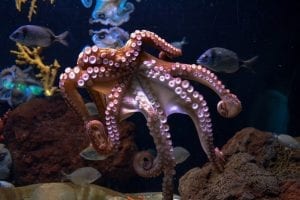 10. Octopuses are famously brainy, and the biology proves it.

Of all invertebrates, octopuses have the highest ratio of brain versus body. Their sensory perception and ability to camouflage, changing color and patterns on their skin, is second to none!

11. Their arms are seriously sensitive.

In the eight wriggly arms of octopuses are two thirds of their nervous systems! Two arms are used to walk on the sea bed and six are involved with other movements – including the capture and carrying of food.

12. They breathe through their skin – much of the time!

41% of the oxygen absorbed by octopuses travels via their skin – weird but true! 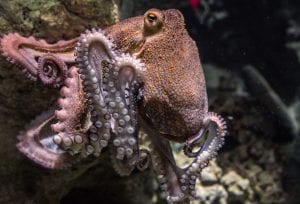 No, the visceral bumps usually seen on their heads isn’t an injury! It’s where their vital organs are located.

Octopus blood sometimes appears bluish in color. That’s because it has a high copper content – this turns blue as it dissolves in plasma.

15. The octopus can be really picky about their living situations.

Some octopuses enjoy socializing, living in groups of up to 40! Others prefer a solitary life – sounds similar to us in that regard! 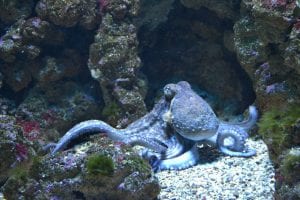 In some cases, yes - the blue-ringed octopus, for example, produces extremely deadly venom.

It's pretty rare. The octopus is only ever likely to eat things smaller than itself, and while there are giant octopuses out there, they normally won't attack unless threatened.

It's a difficult one - octopuses actually disperse ink from the same opening through which they get rid of bodily waste and excess water - but it's not exactly farting!

Is it true octopuses have three hearts?

Yes, and they need all three of them, believe it or not. One of them stops when the octopus swims around, and the other two are used to pump blood to the gills.

Why is having no skeleton an advantage to the octopus?

Octopuses have strong muscles which enable their arms to become rigid for walking or support. Having no skeleton means they can squeeze into awkward spaces to hide or reach food. They can bend in several different directions, too!

Are humans cruel to octopuses?

Sadly, yes - we don’t always treat octopuses with kindness. Kinder methods to capture them are being promoted. Most tragically, in some countries they are still eaten alive! We now know they are highly intelligent creatures with refined nervous systems which sense pain.

Do you know any fun facts about octopus? Share them in the comments!

Are you fascinated with sea life? Dive in to see it up close, with these fun facts about scuba diving!