As some of the largest birds in the world, pelicans make an impression wherever they go!

Every continent except Antarctica can be called home by pelicans. They’re easy to spot thanks to their huge, gaping beaks – and they have wings that can span up to 12 feet in length!

You’ve likely seen pelicans more than a few times on the TV and in movies – but how much do you actually know about this big-mouthed, big-gulping super-hunters of the sea?

Here’s some fun facts about pelicans that might just surprise you.

1. What do you call a gathering of pelicans?

There are several names for groups of pelicans. These include squadrons, pods, scoops and briefs.

2. There are plenty of different types.

There are eight different species of pelican in their family known as ‘Pelencanidae’ of the genus ‘Pelecanus’. Each of these is easily identified by its large pouch by the throat and attached to the lower beak.

3. Pelicans love flying close to the water – it helps them hunt! 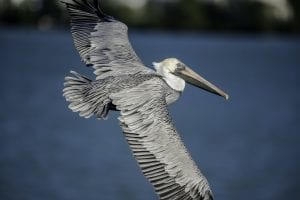 The pouches of pelicans contain water, and by shaking this, moisture evaporates which results in a cooling action. This fluttering motion can be observed when the birds are trying to cool off.

5. What are pelicans likely to eat?

Known as opportunistic diners, pelicans will happily make use of whatever is available on the menu. Their strong beaks can tap and crack crabs. They eat turtles, fish and some people have suggested they have even devoured small dogs!

They are often found trawling for fish around six feet beneath the surface. Sometimes they harpoon prey with their strong beak – and their long legs facilitate casually strutting along to seek their next meal.

7. The pelican is also amazing at swimming!

Pelicans love swimming – their feet are webbed, which helps them glide through the water easier.

8. Pelicans tend to be team players.

Pelican parents nest together, but generally, they are very sociable and prefer living in larger groups. Breeding groups are known as colonies – new parents are kept busy so they don’t have much time for socializing!

9. Both Mom and Dad have a hand in raising a pelican.

Both parents are responsible for creating the first home of the hatchlings. They build nests in trees or sometimes on the ground. Eggs hatch after approximately one month, and babies are fed by parents collecting then regurgitating food into the youngsters’ mouths. 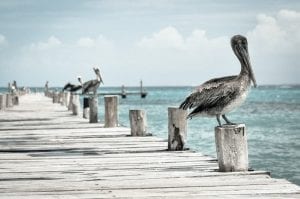 Sometimes pelicans only lay one or two eggs and often only one hatchling survives.

Some pelicans are eaten by humans! In Kenya, East Africa, people sometimes dine on pelican meat. It’s said to be a very salty meat on the whole! 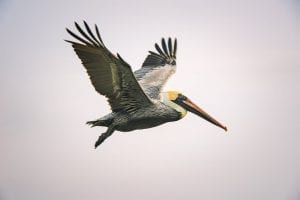 Usually, pelicans sleep stood up. They are also known to sometimes sleep resting on their belly.

14. Pelicans are large and in charge.

Pelicans can often grow to be pretty hefty – you can tell just by looking at them! It’s thought that your average pelican can reach a weight of up to 40lbs – it’s a wonder they can get off the ground, honestly. 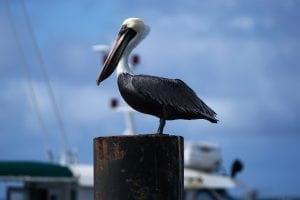 Is it true that pelicans sing?

No - while many other birds do, the pelican is a strange exception. They often squawk and grunt, however!

Is it true that pelicans change color?

Pelicans come in various shades from white and pale pink to various shades of pink through to a very deep vibrant pink. Researchers suggest color variations are partly attributed to their diet. Flamingoes are very similar in this regard!

Are any pelicans considered an endangered species?

Yes, regrettably some pelicans are on the endangered list. Dalmatian Pelican feature on the IUCN list. Their numbers are currently being carefully monitored.

Do you know any interesting facts about pelicans?  Share them in the comments below!

This page was last modified on October 30, 2021. Suggest an edit