Poison dart frogs don’t sound particularly friendly, and believe us, there’s a reason for that! While you probably won’t find too many of these amphibians in your back yard, it’s safe to say you should keep your eyes peeled if you travel into their habitats. Here’s some ‘fun’ facts about poison dart frogs worth keeping in mind…

Poison dart frogs can be very dangerous, though most do not attack unless provoked. Very few cause fatal injury! More frequently they temporarily debilitate predators.

2. They can cause serious problems.

Symptoms following an attack from a poison dart frog can include convulsions, irritation to the skin, muscular spasms and even hallucinations! Not pleasant to mess with, then!

3. They have an odd mode of attack.

They emit toxic secretions through their skin. Most frequently from skin on their backs. 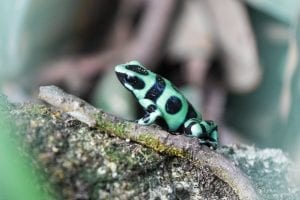 Some poisonous dart frogs are deadly to small animals. They are known to be some of the deadliest animals on the planet. Usually they cause temporary ailments in response to an attack. Most poison dart frogs do not start the fight! They are frequently shy and attempt to avoid conflict.

5. There are many different varieties of this frog!

There are 170 species of poison dart frog. They are from a group known as amphibians and are categorized by the description of being ‘aposematic’.

Aposematic means that they possess a natural characteristic which repulses potential predators. In this case, the secretion of their skin, is toxic. Sometimes it is accompanied by a scent.

Studies have shown some poison dart frogs use their coloration as a defense mechanism. Bold colors and patterns or stripes, enables them to become camouflaged in the undergrowth. Researchers also think that a second benefit of their vibrant colors, may be to deter predators. It is possible that their vibrant colors may alert would-be predators that they are dangerous and to be avoided.

Aside from repelling predators and camouflage, a third feature of the strong colors displayed by poison dart frogs is the way, they attract mates.

7. How long do these frogs grow?

In the wild, poison dart frogs mate during the rainy season. Females lay eggs on leaves and males arrive to release sperm in order to fertilize them.

Females lay up to approximately 40 eggs at time. A group of their eggs is called a clutch. Some may not survive and be eaten or deteriorate by being washed away in rain or trodden on. 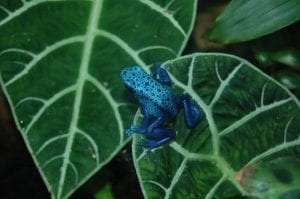 Poison dart frogs are cold blooded. This means they rely on their habitat to maintain their body temperature. In captivity when kept as pets owners must ensure adequate warmth is available or provided otherwise they will die.

11. Their life lengths can vary.

In the wild, it is believed average life expectancy is between 10 to 15 years. In captivity it has been known for pet frogs to live to the age of 23!

Most poison dart frogs are omnivores. They seek out and eat ants, termites and other insects. They will also eat decaying vegetation. 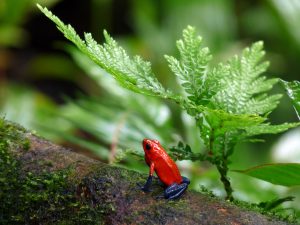 13. Their diets affect their toxins.

Diet can affect the toxicity of poison dart frogs, who are known to eat some toxic matter in their natural habitat. In fact, when kept in captivity, they usually lose their toxicity.

It is not advised to mix species of poison dart frogs in captivity. They may fight and cross breeding is not wise. Some species are compatible but it’s better for novices to keep things simple in the beginning. It has been known to keep two males together in captivity but it is likely that they will fight. 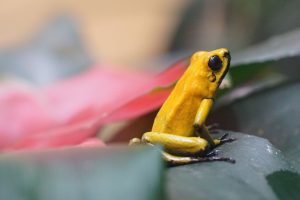 Yes, scientists are studying the toxins in poison dart frogs for medicinal purposes. Amazon tribes use the toxins for ceremonial cleansing practices.

What should I feed my pet poison dart frogs?

In the wild, poison dart frogs actively hunt, so if kept as pets, it's a good idea to feed them live food! We’d better keep an eye out for them becoming the dominant species, then!

Is it ok to keep two male frogs in captivity?

It has been known to be fine to keep two males together in captivity but it is likely that they will fight.

Do you know any fun facts about poison dart frogs? Share them in the comments below!