The ancient Italian city of Pompeii, of course, is well known for having fallen to an ancient disaster. Specifically, the area was covered in and destroyed by a wave of ash and rocks following a volcanic eruption. Therefore, it’s likely to be a name you already recognize from history classes! However, there is still likely to be plenty about Pompeii you might not know. Therefore, we’ve set up a complete fact file to help you on your way.

It’s a very dark period in Italy’s history, but one which is still fervently studied and talked about centuries on. Read on for some more interesting facts about Pompeii.

Pompeii’s status as a site of ancient natural disaster has not gone unnoticed by organizations all over the world. This is to such an extent that, since 1997, the ancient city’s ruins have been classed as a UNESCO World Heritage site. This, of course, means that it is protected.

2. Much of the ancient art there remains.

Believe it or not, you can still see plenty of artwork from the ancient city within the ruins. Specifically, it’s clear that people of Pompeii loved their graffiti! The protected status of the city means there’s no modern scrawlings here, thankfully.

3. Did the volcano sneak up on them?

Supposedly, the people of Pompeii were blissfully unaware of Mount Vesuvius. That is, in the sense that they don’t seem to have been aware that it was a volcano at all! Certainly, that would go some way to explain why so many people chose to live in the area despite the enormous natural hazard! 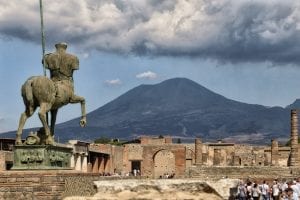 Pompeii is, of course, known to be an ancient Roman town – however, in the centuries before, it seems that it may have been occupied by the Greeks! Details and dates are inexact, as is the nature of history, however, it seems that Greek people were living here as far back as 600 BC – thanks to a Greek temple that seems to be fragmented amongst the ruins.

5. It took us a long time to find Pompeii.

Believe it or not, we didn’t actually uncover Pompeii until centuries and centuries after the event. It went buried beneath the rubble and destruction for around 1,500 years before anyone tried digging it up and restoring it. It’s unbelievable what lies beneath the surface until you actually go probing deep enough!

6. It was a truly fabulous city.

Pompeii was actually once a vibrant and flourishing city, famously visited and inhabited by rich and opulent citizens. In fact, the city supposedly played host to some of the Romans’ best artists and architects. It is all the more tragic that it met such a devastating end!

The city was, of course, buried by ash and debris from the explosion of the nearby Mount Vesuvius. However, as history dictates, it seems that it may just have been an unlucky turn of events. That’s because – if the wind had been blowing a different way, anything falling down from the volcano would have gone in the other direction!

8. There may have been an eyewitness.

Believe it or not, there is recorded testament of the event. It’s thought that Pliny the Younger was an eyewitness to the event, having remarked that there were avalanches of ash that he could spot from Naples Bay.

As a result of its status as an ancient city, Pompeii actually remains the biggest archaeological site in the world. It’s a truly enormous expanse of rubble and ruins – it’s up to 150 acres in size. 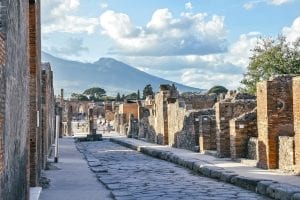 It’s thought that the ash and debris clouds forming from the volcano may have been big enough to block out the sun completely. This, it seems, was an incredible harbinger of doom ahead of the chaos to follow.

Mount Vesuvius, thankfully, hasn’t erupted or caused much damage for a while. In fact, it actually erupted again in World War II. However, that hasn’t stopped it being an extremely active erupter over the years, meaning that the surrounding areas are not yet free from its natural tyranny. It’s thought to be one of the deadliest natural forces on the planet.

In fact, it’s thought that Vesuvius is far from going dormant. Thankfully, we are better prepared these days with extensive evacuation plans – meaning that the chances of a second Pompeii occurring any time soon are likely to be pretty slim. That’s a relief – but always be careful traveling near a volcano in any case! 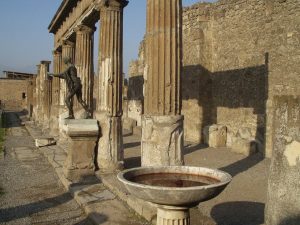 Can you still visit Pompeii today?

What will happen if Vesuvius erupts again?

It’s thought that if Mount Vesuvius erupts again, up to 600,000 people could lose their homes - and that the ash from the eruption could cause problems up to 12 miles away..

What happened to the people of Pompeii?

Tragically, the people of Pompeii were largely buried in the eruption of Vesuvius with no escape - leading to mass suffocation.

Do you know any interesting facts about Pompeii?  Share them in the comments below!

💥 12 Facts about the American Civil War