Pyramids are some of the most mesmerizing structures on the planet, fascinating people to this day! Dating back millennia, it’s believed they’ve been used for a variety of purposes over the centuries. The most famous ones, of course, are the pyramids of Giza which once belonged to the pharaohs and rulers during ancient Egypt.

Famous or not – there’s always been a veil of mystery covering these monumental marvels. Let’s lift the veil and reveal the truth, through these 24 fun facts about pyramids…

1. Across the ages and across the world…

Pyramids have been discovered that date from many different ages and many different countries, including Egypt, Sudan, Ethiopia, Greece, Cyprus, Italy, India, Thailand, Mexico, South America, and also on some of the Pacific islands. 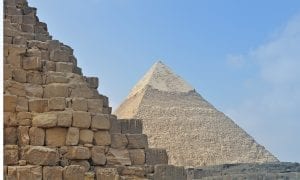 2. The ideas behind these fascinating structures

There are all kinds of ideas as to why the ancient Egyptian pyramids were originally built. Studies and archaeology appear to show that they were monuments built to appease the pharaohs or rulers of the time.

It’s believed that pyramids were stocked up with items and trinkets that a pharaoh’s followers would believe he’d need to be able to move on into the afterlife. In fact, pyramids acted as tombs of sorts for various ancient rulers.

4. How many Egyptian Pyramids are there?

To this day, there are 138 different pyramids still standing in Egypt.

Built to have smooth, angled sides, the Pyramids were supposed to symbolise the rays of the Sun. Their design was a way to help the king’s soul rise to heaven and join the gods, specifically the Sun god Ra.

The Step Pyramid is the oldest known pyramid in Egypt, located in an ancient burial ground called Saqqara, built around 2630 BC.

Built in 2584 BC, the Great Pyramid of Giza, one of three collectively called the Great Pyramids of Giza, is the largest one, that has stood for millennia. Located just outside of modern-day Cairo on the west bank of the River Nile, it’s the largest pyramid in the world and stands at 147 meters, 481.4 feet. It’s estimated that the structure weighs almost 6 million tons – but how on earth could you weigh such a structure in full?

8. Many people worked tirelessly on the Great Pyramid

For twenty years, one hundred thousand people worked on the Great Pyramid’s structure for three months of each year during the Nile’s annual flood when it was impossible to farm the land and most of the inhabitants were unemployed. 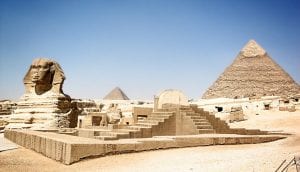 10. More pyramids than all of Eygpt

Sudan is thought to be home to more pyramids and tombs than what you might find in Egypt. Across the Sudanese sands, close to the River Nile there are more than 200 different structures.

In fact, many of the Sudanese pyramids have been recognised by UNESCO as world heritage sites.

Surprisingly, Sudan is home to many more pyramids than its northern neighbor. Sudan is in the lead with more than 230 (possibly more because some are unidentifiable due to weathering), while Egypt holds the second place with over 100 pyramids.

The pyramids in Sudan aren’t as big or as historically significant as the ones in Egypt. Still, the Sudanese pyramids were found with hieroglyphics, mummies, and treasures. Interestingly they weren’t restricted to members of the royal family. In fact, even priests and high-ranking officials would often be buried with a small pyramid atop their graves.

Also called the Pyramids of Meroe, these pyramids are the most iconic attractions in Sudan. Meroe was once the key city of the Kingdom of Kush, governed by the Nubian kings, from the 8th century BC to the 4th century AD.

And yet again, Egypt wins over Sudan, because the Nubian Pyramids are much smaller than their Egyptian counterparts.

Despite the greater quantity of pyramids in Sudan, the Egyptian ones are more popular with tourists!

Perhaps most fascinating of all is that the Pyramid of Giza appears to be at the dead centre where the longest lines of latitude and longitude meet. This was discovered by Dr. Joseph Seiss, and it suggests that it’s the epicentre of the world!

18. The lost pyramids of Mexico…

Nobody knows the exact number. Sadly, the pyramids in the Aztec capital of Tenochtitlán are long gone, but thankfully dozens of others across Mexico still stand. 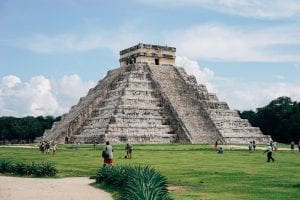 19. Who built the pyramids in Mexico?

Pre-Columbian cultures like the Olmecs, Mixtecs, Toltecs, Zapotecs, Aztecs, and Maya created these fascinating structures. Each civilization left a mark with its specific building style, though they all used materials like clay, stone, and mortar.

20. How old are the Mexican pyramids?

The most important pyramids were built over roughly two millennia, from around 900 B.C.E. to about 1000 C.E.

21. Where are the best pyramids in Mexico?

You can find them along Mexico’s eastern coast, as well as inland, around Mexico City and farther south in Oaxaca.

The 53m-tall Great Pyramid of Cholula also has a church at its peak and a variety of different tunnels and paths. It’s a popular tourist site as well as a functioning chapel for worship.

Even though it’s flanked by modern roads and buildings and it’s not as large as those you’ll find in Egypt or Sudan, the Pyramid of Cestius remains a hugely popular Italian landmark. It’s believed that this structure is a Roman tomb dating back to 18BC. However, we understand that you need special permission to be able to get in and take a look around.

24. And there’s pyramids elsewhere too…

The number of pyramids still standing across the globe is thought to be more than 5,000 in total. So, what are you waiting for, put on your Indiana Jones hat and try finding them all?

Pyramids were generally built and used as tombs and mausoleums - tributes, in a way, to Pharaohs and rulers.

Can you go inside pyramids?

In some cases, yes, tourists are permitted to head inside pyramids. This applies to some of the Great Pyramids in Egypt.

Is it hot inside pyramids?

It’s generally around 68 F inside a pyramid - despite the immense heat outside!

Do you know any interesting or fun facts about pyramids?  Share them in the comments below!

Want to discover more? Check out these interesting facts about Ancient Egypt