Rottweilers are wonderful dogs to keep as pets, as well as to have on side in case you need to protect your property (or yourself!). They are strong, loyal and intelligent – and can also be fearsome – they’re famous for their imposing appearance! Read on for some fun facts about rottweilers and why they don’t deserve their ‘aggressive’ reputation.

The coloring of Rottweilers adds to their imposing appearance! Usually predominantly black, their sleek coats can also have patches of dark brown or mahogany, to a rusty brown, golden brown or tan. Some rotties even have patches of white, too!

2. Large and most certainly in charge!

Rottweilers are large dogs with strong, muscular builds, relatively large paws, neat ears and squarish jaws. Males usually reach a height of between 24 and 27 inches with a weight of 95 to 135 pounds, while females grow to a height of 22 to 25 inches and weigh between 80 and 100 pounds.

3. Treasure your rotties while they’re with you!

The average age of rottweilers is almost ten years old – meaning it’s worth making sure the time you spend with yours is extra special. 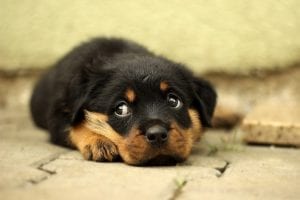 4. They’re full of beans from an early age!

Rottweiler moms usually have up to a maximum of ten puppies in a litter. Rottie pups grow quickly and resemble teddy bears at first! They can quickly develop incredible energy and need lots of play and interaction to ensure they become sociable. Once adopted by an individual or a family, rottweilers usually form a special connection with one person in particular.

Yes! Rottweilers can usually swim well. Famous for being fit dogs with strong muscles, rotties can be powerful swimmers – their sleek coats don’t weigh them down!

7. They’ve been recognized for a long time.

Rottweilers were first admitted to the AKC in 1950, and to the UK’s equivalent in 1966. That’s a long time for recognition, but this actually makes them a somewhat ‘modern’ breed!

8. They have Italian ancestry!

It has been widely accepted that rottweilers are descendants of the Italian Mastiff – they were used by the Ancient Romans to herd cattle. Their strong bodies were agile enough to climb the Alps and they were active dogs eager to please and easy to train – ideal qualities for police and military dogs today, hence when rottweiler descendents are often in such high demand!

9. They helped out during wartime.

In wars of decades past, armies often marched with live cattle – and rottweilers were often used to herd livestock as they moved along.They also pulled carts with butchered meat on board to feed the troops – before refrigeration was possible (or convenient). 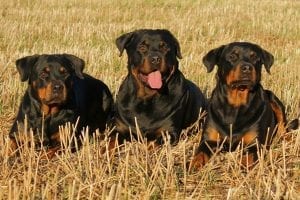 The name ‘rottweiler’ stems from the German ‘rottweil’, which means ‘butcher’s dog’. A fitting name for such a muscular pooch!

Rottweilers were also historically used to help keep cattle herders’ money safe – which is where their origins as fantastic guard dogs is likely to stem from. They were famous for attending market with their butcher owners to ensure no one dared to pick a pocket or two! 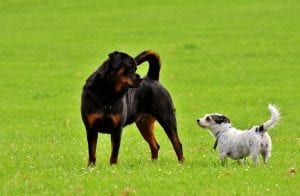 Do rottweilers have powerful bites?

Indeed they do - their bites measure at around 328 PSI (pound per square inch. By comparison, a Great White shark has an average bite PSI of 669! Well-trained rottweilers can make excellent companions and will defend their owner fearlessly. When not trained well, rottweilers can be dangerous.

Rottweilers can be excellent family dogs. They are naturally protective but can be fierce. If trained well, they usually respond especially well to a human ‘pack leader’. They can be instinctive guard dogs, protecting those they love while being playful with their owners all the same.

How many teeth do Rottweilers have?

Do you know any interesting facts about rottweilers? Share them in the comments below!

This page was last modified on November 30, 2022. Suggest an edit