Submarines are incredible feats of engineering. Whether you’ve only seen a handful on film or have had the luck to actually get up close to a vessel, humanity has in fact been dreaming of taking to beneath the seas for centuries.

Today’s submarines are incredible for propelling deep beneath the waves, though many are used for military purposes. In fact, some of the most fascinating research and development that has gone into submarines over the years has occurred as a result of building for war.

How much do you actually know about submarines? It’s time to dive in – pun intended – and to look at some of the most fun facts about submarines and submariners from past decades.

1. Submarines are based on ancient fascinations.

Both Aristotle and Alexander the Great recorded early interest in ‘man working underwater’. Drawings and diagrams dating back centuries show that submarining has always been a dream of humanity’s.

2. In fact, they are older than you probably think.

Early records from 415 BC show that, at the Siege of Syracuse, there was organized military use of submarines.

3. The word ‘submarine’ is pretty clever.

The word ‘submarine’ originates from the Latin ‘sub’ referring to ‘under or below’ and the Latin ‘marines’, meaning related to the sea. 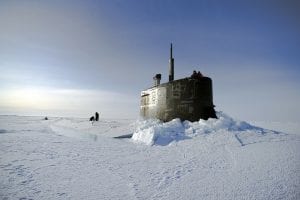 4. The first sub had a leather jacket!

The first submarine on record was designed by William Bourne in 1578. It was propelled by rowing and was a completely enclosed vessel. It was covered in waterproof leather!

Bourne, believe it or not, was a mathematician! His submarine had inflated leather bags to control its buoyancy.

5. The King once demanded his own sub.

In 1620, King James I commissioned a submarine. John Napier, Henry Briggs, and Cornelius Van Drebbel took to work on the machine.

The submarine was propelled by oars. The prototypes were tested on the River Thames.

6. Subs have long been seen as a military marvel.

Van Drebbel asserted that a major military advantage could be gained by the use of submarines, hidden underwater, to attack unsuspecting boats and ships of enemies in harbors.

Denis Papin, a French Physicist, designed and built submarines in 1690 and 1692. These were made of metal and the first controlled buoyancy by use of an air pump. The second used a water pump.

England granted over 12 patents for submarines by the 1750s!

9. Bring on the ballast!

The most notable for innovation was Nathaniel Symons’ design – it was the first to use mechanically operated ‘ballast tanks’ to submerge the vessel. 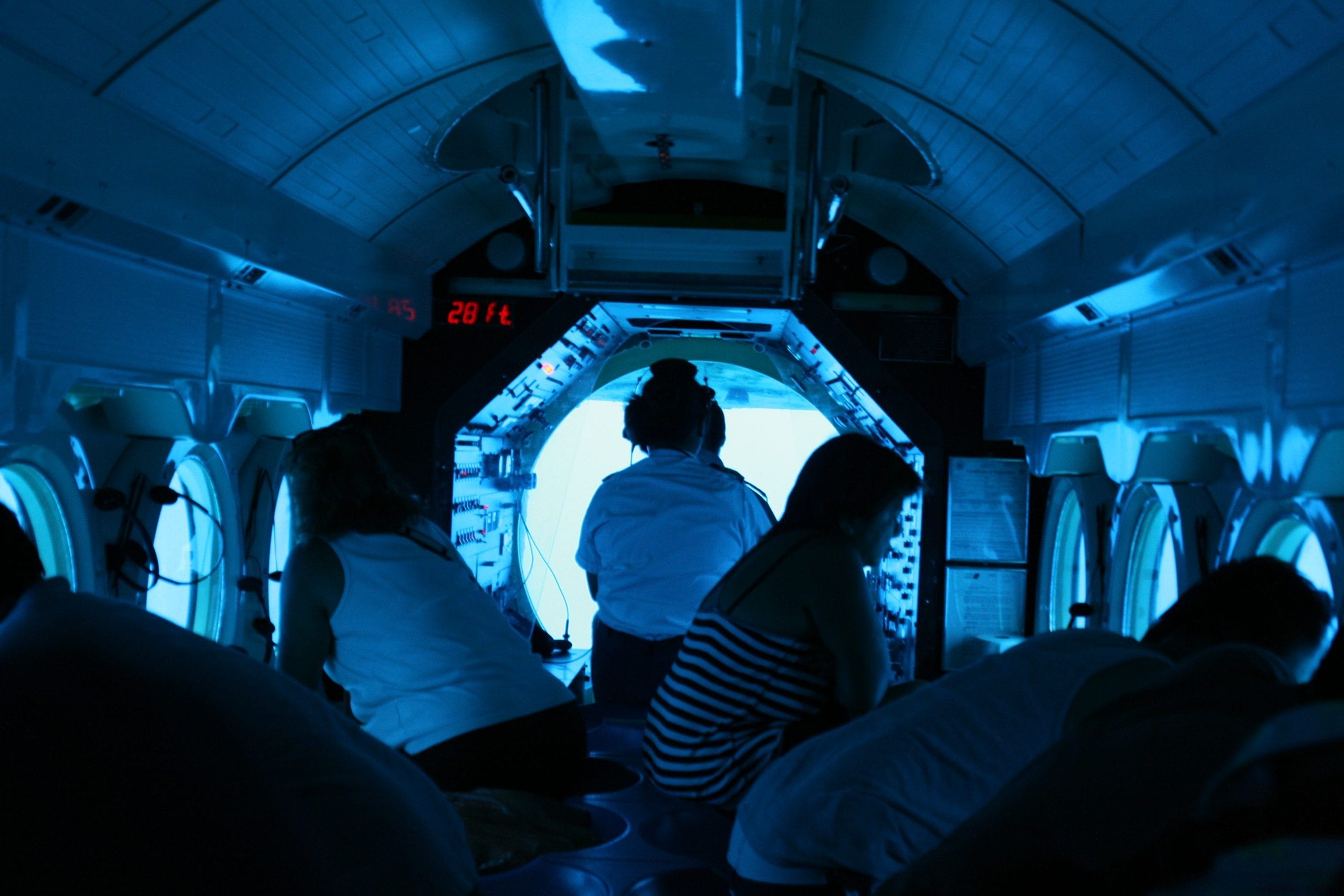 Tsar Peter the Great in Russia ordered the construction of a submarine which was built by a carpenter called Yefim Nikonov in 1720. The submarine was ‘armed’ with fireworks tubes to attack the enemy.

Nikonov also designed an evacuation ‘airlock’ for submariners to leave the vessel.

11. Bushnell’s sub was a world first.

Named ‘Turtle’, the first military submarine was designed in the US by David Bushnell. It was built in 1776 and was the first submarine to be propelled by ‘screws’.

12. However, the French led the way for impressive tech.

The first dual propulsion submarine was designed in France in 1800 by Robert Fulton. As well as ‘onboard’ propulsion, it made use of a sail on the surface. 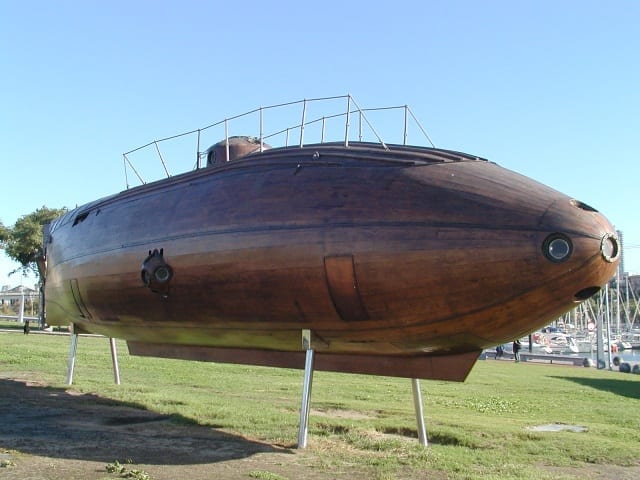 A replica of Narciso Monturiol’s design

13. France really did go above and beyond on submarine automation.

In 1863, the first submarine to not require ‘human propulsion’ was launched by the French Navy. It was called the ’Plongeur’.

14. However, Spain had more than a few irons in the fire.

The first ‘combustion’ powered submarine was designed by a Spaniard called Narcis Monturiol in 1864.

15. Some of the first torpedos were British.

Robert Whitehead, a British engineer, designed the first ‘Whitehead Torpedo’, which was self-propelled and therefore an ideal weapon for use on submarines.

Whitehead’s ‘mine ship’ was propelled by compressed air and could reach speeds of up to 7 knots. The Whitehead Torpedo could reach targets up to 700 yards away. 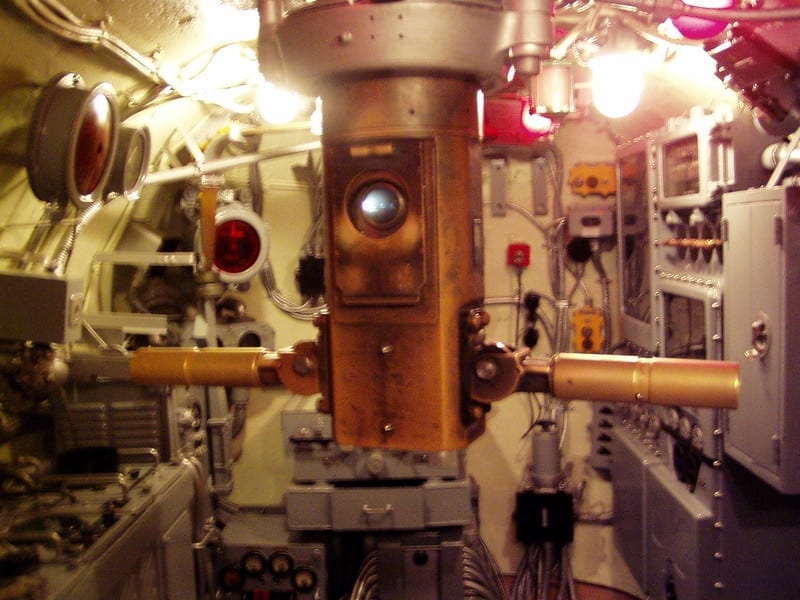 16. The Spanish created an electric sub.

In 1888, the ‘Peral’ submarine was launched from Spain. Constructed by Isaac Peral, the submarine carried three torpedo missiles. The Peral was powered entirely by electricity.

17. However, diesel had a firm place in 20th century subs.

In the early 1900s, diesel engines recharged batteries on submarines. Diesel was safer to use than petrol.

18. The periscope was a French invention.

A French inventor, Edme Hippolyte Marie-Davy, created the ‘periscope’ for naval use in 1854. 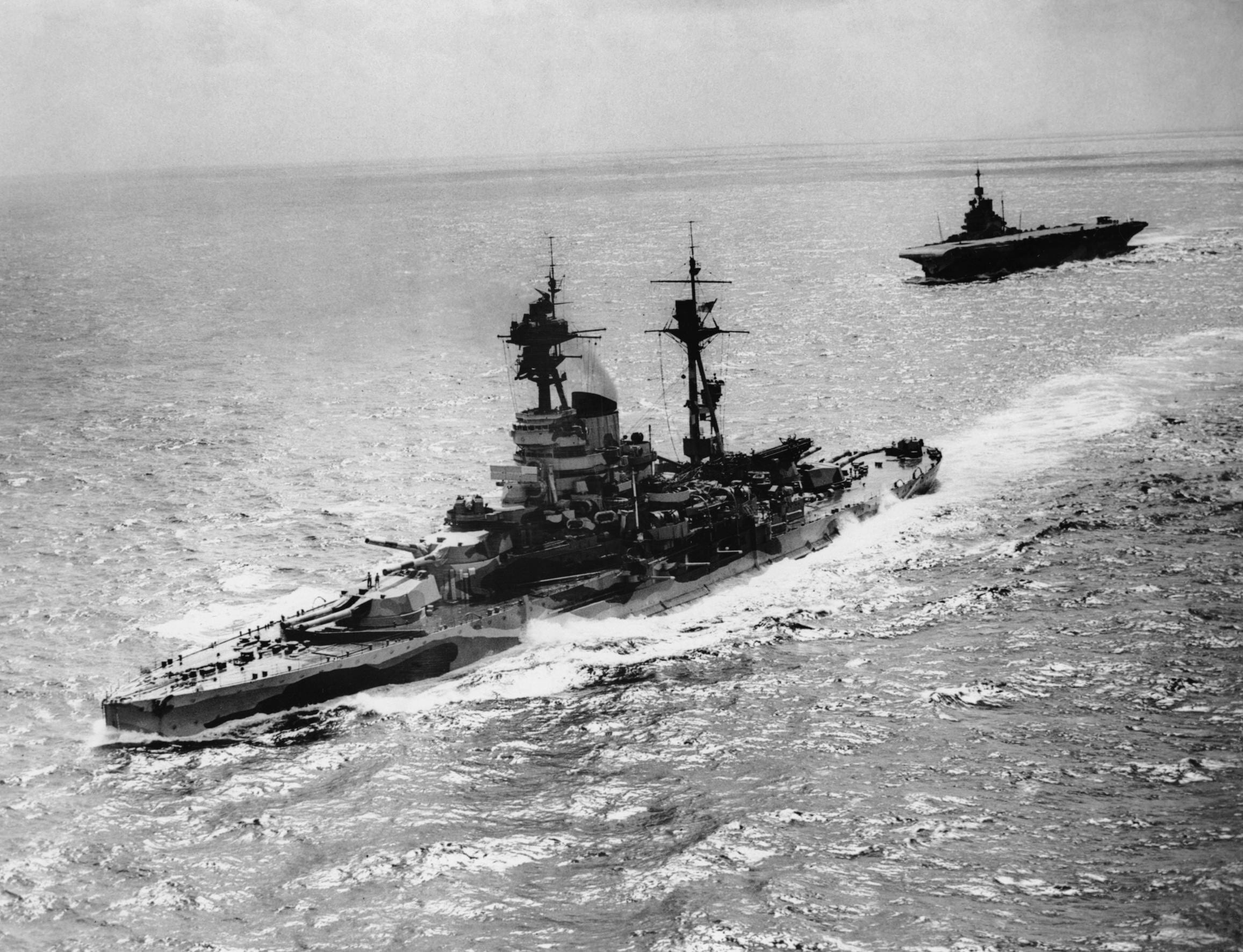 a destroyer and aircraft carrier in convoy

In accordance with Naval tradition, submarines are known as ‘boats’, not ships.

20. The British outranked German submarines by almost 4 to 1 in WWI.

At the outbreak of World War I, Germany had 20 submarines ready for use. The British (Royal Navy) had 74.

During World War I, approximately 5,000 ships operated by Allied forces were destroyed by German U-boats. 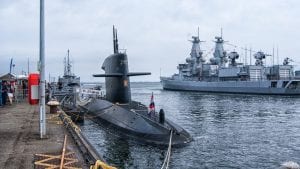 In World War Two, the breaking of the ‘Enigma’ code interrupted military action at sea. Germany suffered heavy losses including 28,000 submariners on 739 U boats.

23. U-Boats were still devastating in WWII.

At the end of World War Two, U-boats had destroyed 3,000 Allied ships, including 175 military vessels.

24. The US brought most of their WWII subs home.

314 submarines were used by the US Navy during the Second World War. Around 52 of them were destroyed. 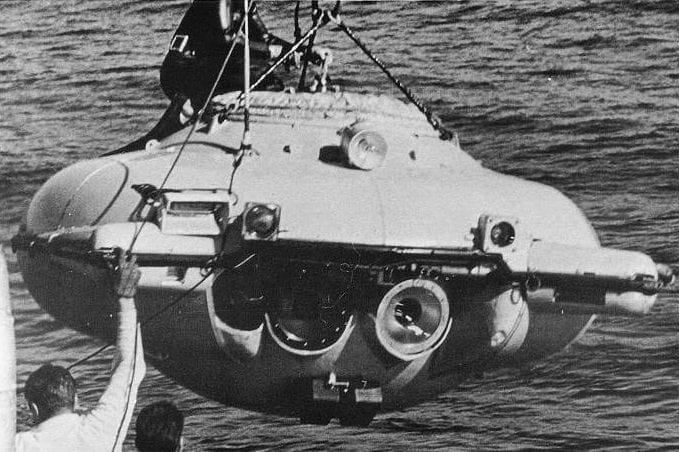 As part of a strategy for ‘deterrent’ during the Cold War, both the US and Russia deployed submarines to patrol the oceans. During this time, a number of accidents resulted in the complete loss or serious damage of submarines on both sides.

26. Submarines are seriously impressive as warmongers.

Following World War Two, submarines have developed – with technology – to become sophisticated war machines. They now have the ability to carry and launch ballistic missiles, nuclear weapons, and cluster bombs.

27. You might be able to track subs from space!

Satellites can be used to track some submarines.

Whilst submarines are mostly thought of for military operations, they can be used for research and general reconnaissance.

Jacques Cousteau, a French former Naval Officer, was famous for his various explorations of the deep. He even had his own special submarine that he helped engineer. He called it Denise! 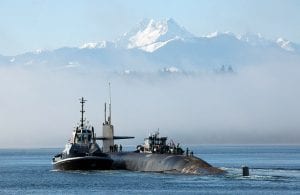 Which country has the most submarines?

The USA and Russia have the most submarines on the planet, with the Americans inching it at the time of writing - around double those belonging to third-place Iran.

Can I buy a submarine?

Do submarines have WiFi?

Generally not - but not as a result of technology - it’s commonly forbidden to access the internet on duty, so some armed forces ban the tech outright.

Do you know any fun facts about submarines? Share them in the comments below!