Built to protect China from its enemies and invaders, The Great Wall of China has also prevented the Chinese people from leaving! It’s now a World Heritage site! Read on to find out more.

11 Gargantuan facts about the Great Wall of China

The Great Wall of China, is the longest man-made masterpiece of engineering, at 21,196 km in length (13,171 miles). That’s the same distance as half of the Earth’s equator!

Its construction started approximately 2,700 years ago!

Around 800,000 soldiers and commoners were hired to construct the ordinal Great Wall under Emperor Qin. 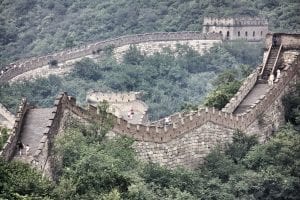 Many people died during the construction of the wall – giving it the sad record as the longest graveyard on Earth.

The average height of the wall is 6 metres.  The highest sections are 14 metres tall.

5.     The Great Wall is one of the most popular tourist attractions on the planet

It draws a staggering 10 million visitors each year.

6.     The Great Wall is a protected symbol of Eastern heritage

In 1987, UNESCO declared the Great Wall of China an international heritage site. Today, it is perceived as a symbol of China.

The wall covers about 15 regions in northern China.

8.     There are plenty of Great Wall tales, myths and legends!

One famous tale about The Great Wall of China is the story of “Meng Jiangnu’s Bitter Weeping” whose spouse was taken to help build the wall and had died in the process. Her sobbing was unpleasant to the point that a section of the wall collapsed – enraging the Emperor.  However, they ended up marrying! 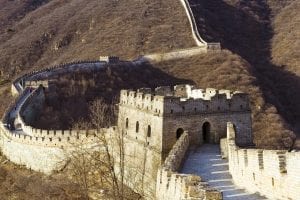 In the 1970s, the Wall was symbolised as an image of oppression and individuals were urged to use the stones as a building material for their very own homes.

10.  Walking the Great Wall takes more than a year!

It takes around 18 months to walk the length of the Great Wall of China.

For binding the wall, a mixture was made which is now known as mortar. For keeping the bricks intact glutinous rice was used.

Do you know any interesting facts about the Great Wall of China? Share them in the comments below.

Are you fascinated with the history of China?  Check out these amazing facts about the Terracotta Army

This page was last modified on July 7, 2021. Suggest an edit

10 Positive Facts about The Pentagon

15 Huge Facts about The White House