]Trees are fascinating organisms, helping the combat of climate change and supporting biodiversity. Here are 13 fun facts about trees that you might not have known.

1. There are thousands of different trees worldwide.

Incredibly, the planet has more than 60,000 known species of trees.

2. Plants are younger to the planet than you may think.

Trees did not exist for the first 90% of the planet’s history. Plants have been estimated to have colonized Earth only 470 million years ago, while the planet is 4.5 billion years old. Earth was home to fungi before trees came along.

3. Trees and plants look after each other.

Trees have symbiotic relationships with fungi that live under their roots, much like plants. While fungi are provided with sugars for photosynthesis, the fungi help the trees absorb water and nutrients from the soil. 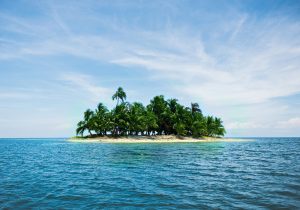 A massive oak tree is able to consume around 100 gallons of water daily, while a sequoia can consume up to 500 gallons.

5. Trees protect themselves well against attacks.

Scientists have observed that trees are able to flood their leaves with chemicals known as phenolics when the insects attack, and therefore defend themselves. They are also able to signal danger to other trees in the surrounding.

6. They can even regulate the heat!

By evaporating water in their leaves, trees are able to lower the air temperature.

7. Some roots grow out of the ground.

Roots typically stay in the top 18 inches of the soil. However, some can also grow above the ground. On the other hand, some roots can extend deep into the underground (up to 20 feet).

It is known that a single tree can absorb as much as 48 pounds of carbon dioxide each year.

9. Ever knocked on wood?

The saying “knock on wood” is believed to have originated from an ancient superstition, and it is done in order to either get good luck or to avoid disaster. It was once believed that helpful spirits resided in trees and that the spirits would be alerted to your presence by knocking on trees. 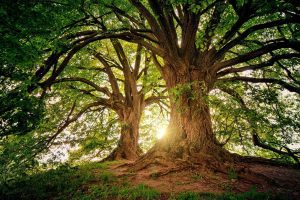 It is common knowledge that tree rings can reveal the age of a tree. However, it is not known well that they also provide information on climate changes, and even when volcanoes have erupted!

The largest organism on Earth is a tree named Pando, which spans a great 5 miles across a forest!

12. There’s such a thing as forest bathing.

Shinrin-yoku, also known as forest bathing, originated in Japan and has been growing in popularity around the planet. It is believed that enjoying the calming atmosphere of the forest has benefits for your mental wellbeing. 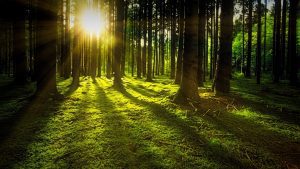 How many of the facts listed above were you familiar with already? Enough to be called a ‘Nemophilist’? Nemophilist is the name given to people who love woodland and trees. Well, if you couldn’t call yourself one before, you can now!

How long can trees live for?

Trees can live to be truly ancient - some can live for thousands of years!

Which tree lives the shortest?

Peach trees don’t tend to live very long at all - they tend to only live for around a decade.

Is bamboo a tree?

Not technically - but it does have a very tree-like stature!

Do you know any fun facts about trees? Share them in the comments below!