Easter is the holy Christian holiday celebrating Jesus Christ returning from the dead. Today, gifts of chocolate eggs are given to represent this. Here’s some egg-citing facts about Easter.

The UK’s first chocolate egg was made by Fry’s of Bristol in 1873.

The world’s tallest chocolate Easter egg was made in Italy. It was measured at 10.39 metres tall and weighed in at 7,200 kg. The egg was taller than a giraffe and heavier than an elephant!

The average time to start on your first easter egg is around 11am on Easter Sunday Morning. However ,43% of children admit to giving into temptation before the big day. 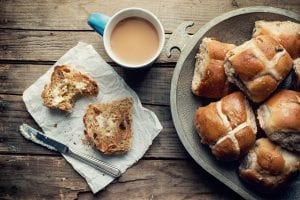 The world’s most expensive edible Easter egg was made in 2016. It was created by La Maison du Chocolat and had over a hundred half-carat diamonds encrusted into the shell – it had a whopping £50,000 price tag on.

On average a child in the UK receives 8.8 easter eggs. That’s double their recommended calorie intake for a whole week.

6.    Crème Egg production is off the scale.

Enough Cadbury’s Creme Eggs are made in Birmingham every year to make a pile ten times higher than Mount Everest if you put them on top of each other. Over 1.5 million are produced every day!

58% of children consider chocolate to be most important part of Easter, with 30% eating their egg instead of breakfast.

That lovely crocodile pattern often on chocolate eggs comes from Germany and was designed to cover any imperfections during production – not just to make it look pretty. 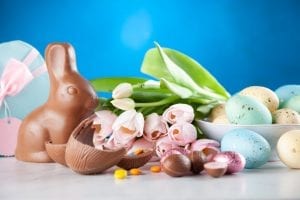 When people eat a chocolate Easter bunny, 76% bite the ears off first, 5% go for the feet and 4% opt for the tail.

Households in the UK roughly spend an average of £75 on Easter treats each year. That’s a lot of chocolate!

The custom of giving eggs at Easter has been traced back to Egyptians, Persians, Gauls, Greeks and the Romans, for whom the egg was a symbol of life.

Do you know any fun facts about Easter? Share them in the comments below!

📖 20 Brilliant Facts about The Bible 📖