Chocolate is a delicious treat that’s always nice to nibble at once in a while. But how much do you actually know about this sweet sensation? Let’s take a look at some tasty facts and figures about chocolate and its production.

2. They melt uniquely – believe it or not.

There are no other edible foodstuffs that melt at 90 degrees F. Chocolate uniquely melts in the mouth!

3. There’s a reason for those crunchy shells.

M&Ms, believe it or not, were actually invented to prevent melting. Specifically, they were designed for military personnel who would find their treats spoiled all too often. 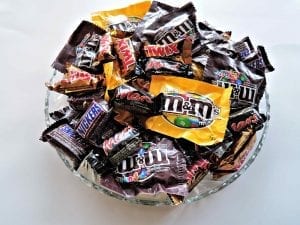 4. Which type is your favourite?

There are generally three different types of chocolate – milk, white and dark. However, another type – ruby – has hit shelves in just the past few years.

5. Is white chocolate even chocolate?

Weirdly, there’s a debate over whether or not white chocolate actually deserves to be called chocolate at all – there’s actually categories set up by the FDA to determine the legalities.

6. Chocolate can be very good for the brain.

Chocolate may actually help to slow or even prevent cognitive slowdown and deterioration. It’s brain food, you see!

7. It’s also a proven mood-booster, on the whole.

Chocolate can also help to lift your mood, according to some studies. This is largely thought to be as a result of it stimulating your neurotransmitters.

8. We don’t blame them for trading!

Some civilisations actually used chocolate as a type of currency. The Aztecs, at least, would trade in cacao beans.

9. Destined for the sweet life!

Milton Hershey was actually a caramel mogul before he started his legendary chocolate brand – always destined for sweet things! 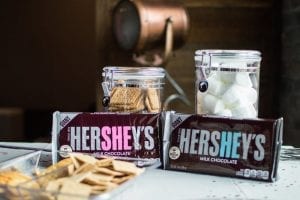 10. You can never have enough cacao beans, as it happens.

You’ll need around 400 cacao beans to make one pound of chocolate – that’s a lot of raw resources – and plenty of effort, too.

Benjamin Franklin was reportedly a big fan of the sweet stuff, and even sold some chocolate of his own.

12. What’s the difference between cacao and cocoa?

Cacao is interchangeable with cocoa. In fact, cacao is the Spanish pronunciation of cocoa! 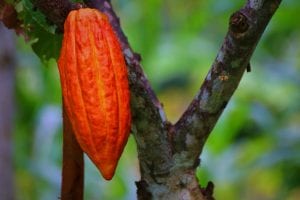 A cacoa Pod on the tree

A single bar of chocolate can take up to four days to produce and perfect. A lot of time and effort goes into these treats.

14. The British made the very first bars.

It’s thought that the very first chocolate bars originate from England, where Cadbury’s made their first bars in 1842. To this day, Cadbury’s continues to be a name synonymous with milk and dark chocolate.

Chocolate is toxic to pets – particularly cats and dogs. Be very careful if they start sniffing around your sweets! 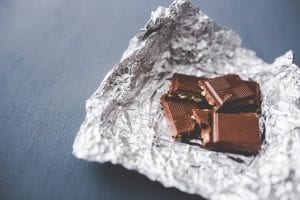 16. Cocoa farms extend for quite a distance.

Cocoa farms are truly massive. In West Africa, you’re likely to see some farms extend to up to 10 acres in size. That’s a lot of beans!

In fact, it’s rare you’ll get chocolate made from cocoa anywhere but West Africa. Around 7/10 cocoa exports export from the region.

Cote d’Ivoire, or the Ivory Coast, makes up much of the West African export of chocolate – they produce around 40% of all cocoa consumed on the planet.

18. But, history shows it started its journey elsewhere.

However, the origins of milk chocolate appear to head all the way back to Europe – Switzerland, in fact! 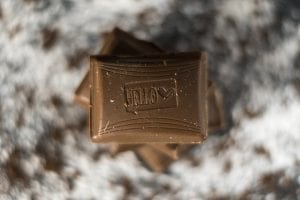 19. Cacao trees can get seriously old.

Cacao trees may live and persist for more than two centuries – they are really hardy. However, they’re only likely to produce the beans we all love for around an eighth of their life. Better get in quick!

Is chocolate good for you?

Too much chocolate is, of course, pretty bad for you. However, chocolate can also help with heart health in the long-term.

What is bad about chocolate?

Chocolate can be very unpopular in the press as it has a high sugar content - that can lead to problems with obesity and diabetes in the long run.

Are there four types of chocolate?

Yes - there’s now ruby chocolate, too, though this is quite rare - the British chocolate bar brand KitKat was one of the first to bring the treat to the masses in the east.

Do you know any fun facts about chocolate? Share them in the comments below!

Are you partial to a sweet treat? You might like to check out these fascinating facts about ice cream…

This page was last modified on September 7, 2021. Suggest an edit