How much do you know about Mercury? The first in our solar system and surprisingly toasty, this planet has fascinated mankind for centuries! While it’s the smallest planet in our little line-up, it’s also the closest to the Sun – and while bits of Earth can get pretty warm sometimes, it’s nothing compared to the roasting you’ll get out here!

Mercury’s played a part in more than a few sci-fi stories over the years, too – could it be that we eventually land on and colonize the planet? Given that it’s so warm in the day and so cold at night, maybe not – and Venus isn’t much better! Even so, we’re still very much exploring and discovering the planet, even now.

Here’s some interesting facts about Mercury well worth remembering for that next pub quiz!

When NASA chose to examine the planet Mercury more closely, they named their spacecraft ‘Messenger’. That’s a reference to the fact that the God Mercury was known as the winged messenger!

To the naked eye, at night, Mercury can resemble a very bright twinkling star. Mercury appears to have a tail when viewed by telescope – solar winds push against the planet’s magnetic field to create this feature.

3. We’re not done exploring the planet.

The next space mission scheduled to orbit with Mercury is scheduled to arrive in 2025.
It is going to take much longer than Nasa’s Mariner 10 which took 147 days to get there. 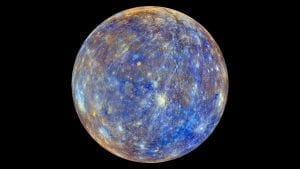 Several writers of science fiction have suggested humans might one day live on Mercury! However, this is highly unlikely because the planet is simply too hot for us to live comfortably. Temperatures reach 801 degrees Fahrenheit – we’d melt on contact!

As Mercury has no atmosphere, night temperatures fall to around minus 279 degrees Fahrenheit. Deep cavities on the surface of Mercury sometimes shield areas from sunlight, too – these can often be continuously cool, especially those not facing the sun.

Mercury is covered in a thick layer of dust and rocks which appear dark grey. The rock is igneous silicate.

Some small volcanic sites have been identified on Mercury. Water and ice have also been detected by Messenger! The deep cavities can contain ice all year round when not facing the sun. The largest of these craters is spacious enough to engulf the whole of western Europe!

Mercury is the planet closest to the Sun in our solar system. It takes Earth 365 days to orbit the sun and Mercury only 88 days.

9. There are minerals deep in Mercury’s rock.

Several minerals have been found on this planet.They include magnesium, sulphur, sodium, and calcium. 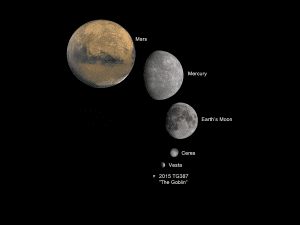 10. Venus and Mercury have plenty in common.

Mercury shares two distinct similarities with the planet Venus – it has no rings and has no moon. It seems Saturn hogged all of those!

11. Mercury has plenty of markings.

Not to embarrass it or anything – but Mercury is known for having more craters on its surface than any other planet in the solar system.

Poor Pluto – since the tiny celestial body was relegated to ‘dwarf’ status, Mercury now takes the mantle of being the smallest planet in the whole of the solar system as we know it. 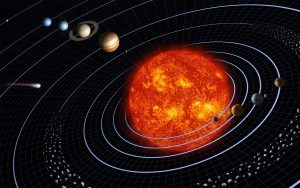 How big is the planet Mercury?

Mercury has a surface area of 74.8 Million square kilometers. Pretty easy to get lost, then!

How far is Mercury from the Sun?

Mercury is 57.91 million kilometers from the Sun - that’s despite the fact that it’s the closest to the star out of all of the planets in the system!

Is it dangerous to look at Mercury through a telescope?

It can be very damaging to try to observe Mercury during the day. This is because Mercury is so close to the Sun. Strong sunlight may cause permanent damage to your eyes! A website called Celestron gives a month by month guide with details of the optimum times to observe this planet!

Do you know any more fun facts about Mercury? Share them in the comments below.

And if you’re interested in the space rocks that gave Mercury its famous craters, check out these mesmerizing facts about meteorites.