Comets are truly fascinating – look up to the sky and you probably won’t see one, but these shooting stars are often gorgeous, spectacular sights through a telescope lens! Right here, we’ll take you through some fun facts about comets you might find super surprising.

2. What are the naming rules for comets?

Names for comets are usually automatically connected to those who discovered them. Who knows – your name might be written in the stars if you find one!

3. Comets were sometimes thought to tell the future.

Ancient Greeks and Romans shared the belief that comets were portentous. That is, they often signaled forthcoming events! 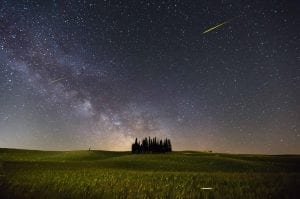 Hale-Bopp is approximately the same distance from the Sun as Pluto.

5. Some have regarded comets as omens both good and bad.

Before the 16th century, comets were usually considered a bad omen. Studies have shown that people of the time felt they were the forecast of catastrophic events. For example, they believed them to foreshadow disease or crop failure.

What’s more, comets are considered both good and bad in Hinduism! It is a matter of individual interpretation!

6. Some transportation has been named after comets.

The New Jersey Railroad Company named their new train the Comet in 1921. It was operational until 1941. The name and its design was intended to capture celestial beauty coupled with speed!

Comets can and do rotate. They do not move in a stable fashion, because, unlike planets, they are not a uniform shape.

Yes, the name Comet is sometimes given to girls! It means ‘long-haired star’, which is thought to refer to the long tails of comets, which could resemble a ponytail.

9. What is a dirty snowball?

Comets are sometimes called ‘dirty snowballs’. As they were formed billions of years ago and from collecting dust and debris, their bright shining form resembles gritty snowballs. 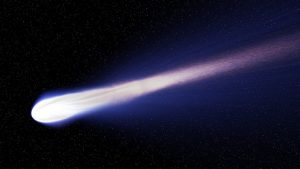 10. Not all comets are the same color!

Some comets appear to be a green color because of the reflected light. Emissions occur at different wavelengths just as the colors of a rainbow appear. Carl Wirtanen made this discovery in 1948. Therefore this discovery is also called ‘46P/Wirtanen’.

11. What is comet velocity on impact?

The velocity on impact of comets refers to the speed at which they travel and when impact occurs. This is calculated to normally be around 32.9 miles per second! It is noteworthy that currently no comets are thought to be on a collision course with Earth!

Comet orbits are very similar to those of planets. This means that they travel in elliptical patterns around the Sun. 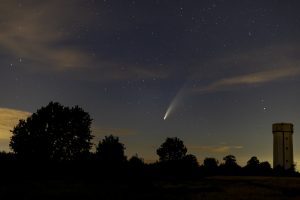 What are comets made of?

Generally, you will find that comets are made up of all kinds of debris, ice, and gases - and that their tails, on the whole, are propelled by the solar wind, shot forward from the Sun itself. They are a composite of all kinds of elements!

How big are comets in general?

Comet sizes really do vary, but you probably won’t ever see one as big as a planet. They can vary in size from at least 750m up to 20km - that’s as much as 12 miles in diameter, still pretty sizeable!

Do comets have the potential to destroy Earth?

It’s highly unlikely, but various studies have suggested that there may be as little as a one in 10,000 chance that we will succumb to a comet around the size of 2km in the next 70 years. The impact could spell danger for much life on Earth - particularly human life, dependent on the atmosphere.

Do you know any interesting or fun facts about comets?  Share them in the comments below!

🌎 13 Enigmatic Facts about The Equator