Looking to boost your knowledge of South America and increase your chances of taking the glory at the next pub quiz? Take a look at these fun facts about Suriname!

1. Where on Earth is Suriname?

Suriname is a small country in South America.

It is bordered by French Guiana to the east, Brazil to the south, and Guyana to the west. It also has a coastline along the Atlantic Ocean to the north.

2. Here are the compass coordinates.

Fancy exploring this beautiful country? Head for the coordinates of 5.8333° N, 55.1667° W to embark on your very own Surinamese adventure!

The terrain here is dominated by rolling hills, with a narrow coastal plain to the north. 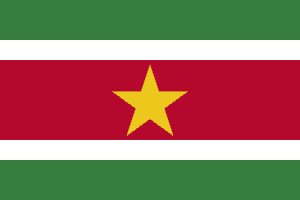 Roughly 80% of this wonderful country is covered in rainforest!

The total land area of Suriname is 63,037 square miles (163,265 square kilometers)…that’s slightly larger than half the size of the UK. That makes it the smallest country in South America!

6. And the population reflects this!

7. What are people here known as?

Residents here are known as Surinamese.

8. What’s the capital of Suriname?

9. There are two main seasons here.

Surinamese enjoy a tropical climate that is moderated by trade winds, with a rainy season from April to August. 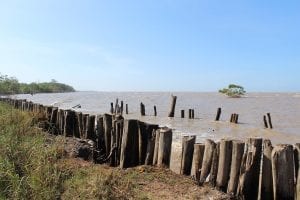 10. Suriname and Holland have history.

Despite its location, the official language of Suriname is actually Dutch! Although English is also widely spoken. In fact, Suriname was under Dutch rule until 1975! 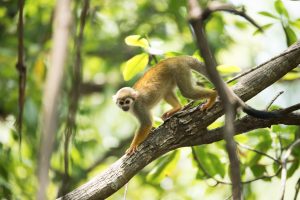 13. Better keep on their good sides!

Allegedly, anyone under the age of 30 who wishes to get married in Suriname can only do so with written permission from their parents!

14. Here’s some facts about Suriname’s industry.

Is Suriname safe to travel to?

On the whole, Suriname is very safe for travelers, however, always try to keep safe as you normally might when traveling abroad!

Is Suriname cheap to live in?

On the whole, Suriname is very cheap to live in - it’s around 70% cheaper to live here than in the US.

What is Suriname’s main religion?

The main religion followed in Suriname is Christianity.

Do you know any fun facts about Suriname?  Share them in the comments below!

This page was last modified on December 18, 2021. Suggest an edit