The numerous ways a beaver shapes its environments for survival are awe-inspiring. Here are some fun facts about beavers that you might not have known about.

Beavers used to be giants back in the Ice Age. Named “Castoroides,” they looked similar to the modern beavers but only much bigger. They grew up to 8 feet long and weighed a staggering 200 pounds.

2. It’s not a diet of Cheetos, honestly!

A beaver’s front teeth are orange in color. They require strong teeth to gnaw through trucks of trees, and their tooth enamel, fortunately, contains iron. This makes their teeth extremely strong, sharp, and indeed orange.

The tail of a beaver is helpful in both land and water. Their leathery, oversized tail can grow as long as 15 inches, and it can be used for swimming (uses its tail as a rudder) or as a warning to other beavers that a predator is present (through slapping it against the water). 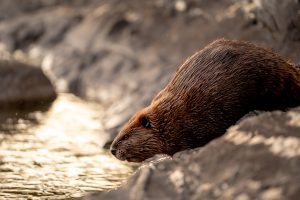 4. However, they use more than just their tails to swim around.

To help them navigate through the water, beavers make use of a wide variety of adaptations (necessary for the mammal to live a semi-aquatic life). For example, the valves in their ears and nose shut when they enter to swim to keep out the water. In addition, their lips closed behind their big front teeth, which enables the beaver to transport food and materials for building without drowning.

Beavers can remain underwater for 15 minutes without breathing.

6. No need for goggles here!

To help them see underwater, beavers are equipped with a third transparent eyelid.

The wilderness of northern Alberta is home to the world’s largest beaver dam (stretching 850 meters). It was discovered in 2007 via a satellite image, and scientists believe that numerous generations of beavers have been working on the dam, and it goes back as far as the 1970s. An explorer named Rob Mark was the first person to reach the dam.

Although hard to wrap your head around, beavers have once traveled via a parachute. As the people of Western Idaho began to clash with the beaver population back in 1948, the Idaho Department of Fish and Game were determined to move these threatened beavers to a nearby area that was more protected. They devised a plan, including using World War II surplus parachutes to drop boxes of beavers down from planes. Out of the 76 beavers that made the skydive, every beaver except one survived the fall.

Property damage caused by beavers in the U.S. is estimated to be around $100 million every year!

The front teeth never stop growing, as with all rodents. 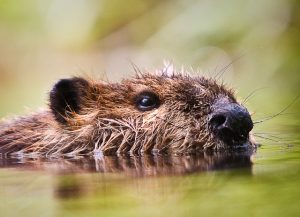 What do beavers eat?

Beavers, of course, eat parts of trees such as the soft bark tissue - but they even eat roots, too!

Do beavers ever lay eggs?

No - beavers give birth to live young, but many can confuse them for fuzzy beasts such as the platypus, that oddly enough does lay its eggs!

What exactly are beavers, anyway?

Beavers are animals known as ‘amphibious rodents’ - meaning they take to the water!

Do you know any fun facts about beavers? Share them in the comments below!