Buddhism is a religion that leads its believers toward spiritual development and enlightenment. Founded by Siddhartha Gautama, otherwise known as “the Buddha” 2,500 years ago, it’s one of the world’s oldest faiths.

Here are 15 interesting facts about Buddhism that will set you on the path to enlightenment.

1. Buddhists don’t believe in a god or supreme being

The followers of Buddhism don’t acknowledge a god or supreme being, unlike many religions. Instead, they focus on achieving Nirvana, or the state of enlightenment, where the individual experiences inner peace and wisdom. In fact, the Buddha, although important, is not a god. He is referred to as the “Enlightened One”.

2. Buddhism has no central text

Buddhists have many sacred scriptures, but they don’t have a central text universally referred to by all traditions. Some Buddhist scriptures include the Sutras and the Tipitaka, which are collections of Buddhist teachings. 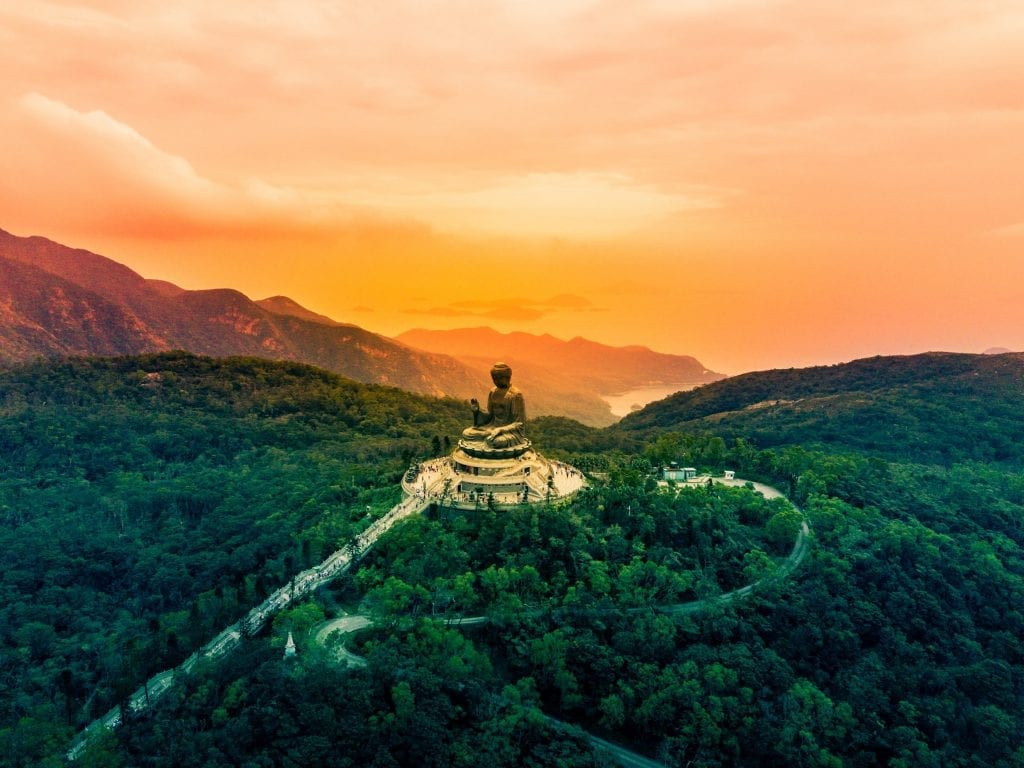 3. Anyone can be a Buddha

It’s a little-known fact that in the Buddhist tradition, everyone has the potential to become a Buddha. A Buddha is someone who has reached Nirvana, which is the aim of its followers. Also, Buddha is not the personal name of the founder. His real name is Siddhartha Gautama.

The three major branches of Buddhism are Theravada, Vajrayana and Mahayana. Each of these traditions reveres its own sacred texts and has slightly varied interpretations of the Buddha’s teachings.

One of the most important Buddhist teachings is the fact that life is full of suffering. But they can minimise suffering if they follow the Noble Eightfold Path as they journey towards Nirvana. This includes:

6. The Wheel of Dharma represents these eight steps

The Wheel of Dharma, also known as the Dharmachakra, represents the Noble Eightfold Path, as well as the teachings of the Buddha. It is a wheel with eight spokes, representing each step.

Karma is one of the key Buddhism beliefs. It states that every present action will have a consequence later in life, although it is not certain when. Every good deed will get good karma, while evil acts will bring bad karma. 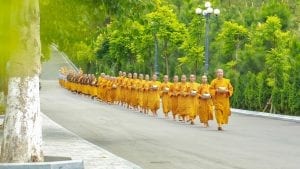 8. Each person should keep good karma

Because Buddhists believe that every action will affect our future, they aim to keep good karma as they work their way towards Nirvana.

9. Meditation is an important part of Buddhism

In the Buddhist tradition, meditation is the key to achieving Nirvana. Meditation relieves the mind of negative thoughts like hatred and anger and clears the path toward wisdom. It helps people see the true nature of things.

The Pali Vinaya-Pitaka, a Buddhist scripture, states that monks should shave their hair when it is two-finger-widths long. This is a symbolic gesture, showing that the monk is ready to leave the past behind and commit to the teachings of the Buddha. Shaving also discourages vanity. 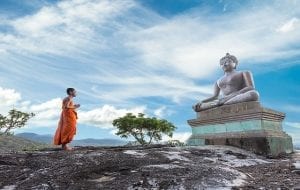 Some Buddhist monks in Japan practised the Sokushinbutsu or self-mummification. The monks adopted a special diet of tree roots, nuts, and more. Then, they sealed themselves alive into pine burial chambers. Interestingly, the Buddhist monks still meditated in their final days in the pine box.

Half a billion people believe in the Buddha’s teachings, and most of them live in Asia. Two hundred fifty million alone are in China, while a vast number are found in Japan, Korea, Thailand, Vietnam and Sri Lanka.

13. 7 million Buddhists are found outside Asia

Though only about 1.4% of the world’s Buddhists live outside Asia, that still numbers to nearly 7 million faithful. They can be found in Italy, Egypt and the Latin American countries. 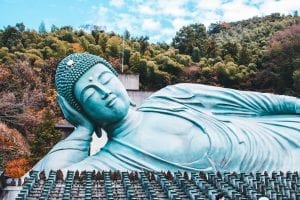 Buddha in Nanzoin Temple in Fukuoka.

14. Buddhism is the 4th largest religion in the world

15. Three of the tallest statues in the world are of the Buddha

The second, third and fourth tallest statues in the world are of the Buddha. The second tallest is the Spring Temple Buddha in Henan, China, which stands at 128 m (420 ft) and was finished in 2008. The Buddha stands on a beautiful 20-meter lotus throne. The third tallest is the Laykyun Sekkya in Khatakan, Taung, Myanmar, which stands at 115.8 m (380 ft), and even has an elevator to bring tourists to higher levels. The fourth tallest is the Ushiku Daibutsu in Ibaraki, Japan, standing at 100 m (330 ft) and is made of bronze.

Where is the famous monument known as the Golden Buddha?

The Golden Buddha is located in Bangkok, Thailand. Practicing Buddhists, as well as millions of tourists, visit this sacred monument.

Is the Golden Buddha made of gold?

Indeed it is made of solid gold and weighs an astounding 5.5 tons! The statue is 9.8 feet tall (3 meters). It is meant to reflect the true nature of Buddha.

In 1928 an order was made in Thailand forbidding women to become Buddhist priests - so, unfortunately, the answer is no.

Do you know any interesting facts about Buddhism? Share them in the comments below!

If you want to learn more about religion, enlighten yourself with these facts about the world’s largest faith, Christianity.