Henry VIII of England is an iconic Tudor king, famous for marrying six wives and breaking away from the authority of the pope and the Roman Catholic Church. But there’s more to him than marriage and faith. Here are 10 surprising Henry VIII facts.

1. He was athletic for most of his life

Famous portraits of Henry VIII show a stout monarch, but the king was lean and athletic for most of his life. Only in later life did he have a 60-inch waistline. In the 16th century, monarchs led troops into battle, so a strong, robust king is believed to have a military advantage.

Henry VIII wanted to promote the image of a warrior king, so he engaged in a wide variety of sports, including jousting, horseback riding, hunting and martial sports like fencing, archery and even wrestling. He played most of his favourite sports at Hampton Court Palace.

The most well-known fact about King Henry VIII was that he married six women:

Henry’s wives faced different endings. When Catherine of Aragon could no longer give him a male heir, he divorced her and married Anne Boleyn. He then had Anne beheaded. His third wife, Jane, died from postnatal complications, and he divorced Anne of Cleves. He had his fifth wife, Catherine Howard, beheaded, too. Catherine Parr, the sixth, outlived him. 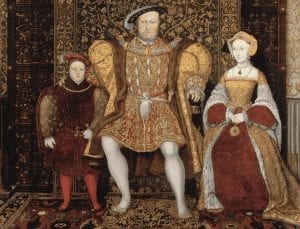 4. He was a paranoid hypochondriac

The time of Henry VIII was characterised by many diseases that affected commoners and nobles alike. The king was careful not to contract any of them. Henry VIII was something of a hypochondriac, living in fear of deadly diseases like the sweating sickness and plague.

The king did his due diligence and steered clear of anyone who might have been exposed to the diseases. He isolated himself, and when a wave of sweating sickness hit London in 1517-1518, he left for a year. In fact, Henry VIII avoided important ambassadors suspected to have the disease.

5. Henry was something of a prude

Despite the image of being a ladies’ man (he did, after all, have six wives), it’s a fascinating fact that Henry VIII was considered prudish behind closed doors. Evidence showed that Henry VIII was discreet and valued propriety. He was even reportedly shocked by the behavior of Anne Boleyn.

It may sound surprising, but the fact is, Henry VIII wrote and published his own book — the first English king to do so. He authored the Defense of the Seven Sacraments, also known as the Assertio Septem Sacrementorum, in 1521.

In addition to his many abilities, Henry VIII also composed music. The king was said to have composed the tune “Greensleeves”, but that’s all myth. The king did compose 33 different works and played wind and string instruments proficiently.

Henry VIII: His legacy as a king

8. He was a brutal monarch

Henry VIII accomplished great feats for his kingdom, but he was also one of the most brutal English kings. The exact number of prisoners sent to the Tower of London (then a prison and place of execution) is unknown, but Henry VIII condemned many illustrious people to the death penalty, including two of his queens, his principal adviser Thomas Cromwell, and Thomas More, an influential statesman. Henry VIII reportedly imprisoned and executed more people than any other English monarch.

9. He expanded the British Royal Navy

A big part of Henry VIII’s legacy is the establishment of the Royal Navy. His father, Henry VII started building warships for a royal navy and by the time of his death, had assembled a fleet of five. Henry VIII continued this program, and when he died, the Royal Navy had more than 40 ships.

The king built dockyards, as well as storehouses for shipbuilding supplies. The water vessels were large enough to contain 200 sailors, 200 soldiers, 30 gunners and many more archers, alongside cannons.

10. He was the only English king to have ruled over Belgium

In 1513, he captured the city of Tournai in modern-day Belgium, which was then a significant territory. Tournai became part of his dominion for six years, but the city was returned to French rule in 1519, following the Treaty of London.

Did we miss any funny fact about King Henry VIII? Share them in the comments!

And if you want to get to know the current monarch of England, here are some fun facts about King Charles III