Hanukkah is the Jewish festival of light. It commemorates when the Jewish people won a battle against the Greeks to practice their religion freely. Want to know more? Here are some fun facts about Hanukkah.

1. Why do people celebrate Hanukkah?

Hanukkah commemorates the triumph of a small group of Jews known as the Maccabees who fought against the Greeks. They refused to pray to the Greek Gods and have their Jewish rituals banned.

To celebrate their victory, they lit an oil lamp. However, there was only enough oil to burn the candle for one day but incredibly it burned for eight days which is why the holiday lasts for eight nights.

3. The Menorah is an important fixture.

During the holiday, a Menorah which is a candelabra with nine candles is lit each night. They have four candles on each side of the center candle known as the Shamash which is intended to light all the others. The Shamash generally sits higher than all the other candles. 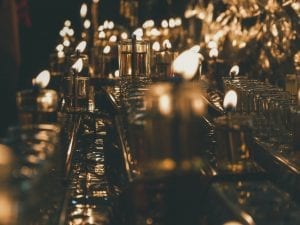 Hanukkah is a fun time for children as they’ll receive gifts and Hanukkah money. Gifts were not always given though, as it used to be just money. However, as Christmas become more popular, more and more Jewish people began giving gifts at Hanukkah. Some families even give each other small gifts on each of the eight nights of the holiday.

5. Oil has a firm place in the cooking, too!

During the holiday, many Hanukkah dishes are fried in oil as a symbol for the miracle oil that burned for eight nights straight. Some of the dishes that are served are Latkes (a type of potato fritter), Sufganiyot (jelly doughnuts), apple fritters, kugel, and pancakes.

One of the most popular Hanukkah dishes prepared in oil is the Sufganiyot which are jam doughnuts – over 17.5 million are consumed in Israel during this holiday.

The largest Menorah in the world is located at Grand Army Plaza in New York – It’s 32 feet high and weighs 4,000 pounds.

7. Hanukkah is one of many Jewish holidays.

Hanukkah isn’t the most important Jewish holiday – Passover and Rosh Hashanah are more significant to the religion.

8. President Truman was a Hanukkah trailblazer.

In 1951, Harry Truman became the first president to celebrate Hanukkah at the White House by accepting a Menorah as a gift from the Prime Minister of Israel, David Ben Gurion.

There is no right or wrong way to spell Hanukkah. The holiday has been spelled as Hanukkah, Hannuka, or even Chanukah but all the spellings are actually correct. There is no correct way to spell the Jewish holiday because there’s no accurate way to directly translate the Hebrew sounds to English. 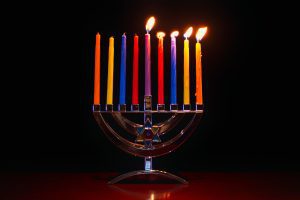 10. The Dreidel is more than just a fun toy.

A special game is played during the holiday which involves spinning a four-sided spinning top called a Dreidel, which has a Hebrew letter on each of the four sides. However, the famous Dreidel was originally invented for Jewish children to hide that they were studying the Torah during a time in which Greece had outlawed Jewish studies.

11. A great way to encourage reading!

During Hanukkah, Jewish people follow a tradition of incentivizing their children to learn the Torah by gifting them Gelt – golden-wrapped chocolates that resemble coins. Gelt can also be won in a game of Dreidel. 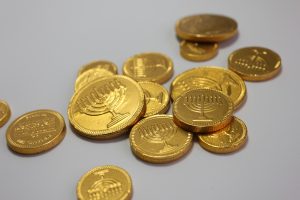 When is Hanukkah celebrated?

Hanukkah takes place, traditionally, on the 25th day of the month of Kislev in the Hebrew calendar. That means it is likely to fall in late November or early December.

How many presents do you give at Hanukkah?

As there are eight days to Hanukkah, that means eight offerings of different gifts.

Can people drink during Hanukkah?

Alcohol isn’t normally a large part of Hanukkah celebrations, though providing the alcohol you drink is kosher, it’s not forbidden.

Do you know any interesting facts about Hanukkah? Share them in the comments below!

This page was last modified on February 10, 2022. Suggest an edit