Hyenas are wild mammals who are perhaps best known for their distinctive calls – some people feel they are ‘laughing’ when they call each other! However, there’s certainly more to the hyena than the odd joke… here are some fun facts about hyenas worth keeping in mind.

Though dog-like in appearance, hyenas have their own classification. Their scientific name is Hyaenidae – they are very loosely related to meerkats and mongooses.

2. There are four main types of hyenas.

Four distinctly identifiable types of hyenas can be found today. They include the Aardwolf Hyena Spotted Hyena, Striped Hyena’ and the Brown Hyena.

Hyenas are known to enjoy a long courtship before forming partnerships. Males are often smaller and less aggressive than females. Once they have courted for several months, cubs come along and remain with parents for up to approximately two years. 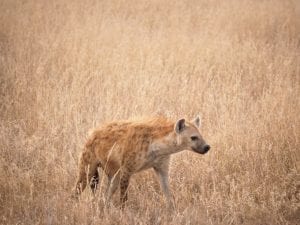 Hyenas typically have between two and four cubs in a litter. Hyena parents are protective of their young and tend to guard their infants – by doing so, they have become some of the most prolific carnivores in the wilds of Africa.

There are two main predators of hyenas – lions and humans. Lions and hyenas sometimes coexist in the same areas – though it can be rare that this is the case.

6. Humans have been preying on hyenas for a long time.

Humans have killed hyenas for centuries. Ancient Egyptians are known to have enjoyed them on their menus!

7. They are sought after for various reasons.

Apart from meat, they have been killed for their skins and also their body parts. Humans practicing certain rituals have sought particular body parts of these beautiful creatures. Parts of these animals have also been used in medicine.

8. Hyena diets really can vary, too.

Hyenas eat a variety of animals. These include fish, lizards, antelopes, wildebeest, lions (!), and monkeys. They are also known to eat termites!

9. They are very efficient eaters.

Hyenas usually eat the entire body of their prey, including bones and hooves. By polishing off an entire meal, they don’t usually leave food matter behind to decay. This prevents the spread of disease! 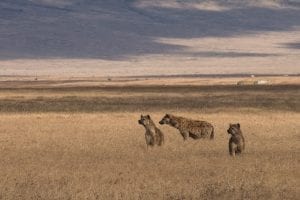 10. No, really – we weren’t kidding about the termites…

Hyenas have been known to eat up to approximately 30,000 termites in one sitting.

11. Hyenas clan up together.

Hyenas are known to be sociable animals and seldom live a solitary life. Apart from coupling up, families remain together, and even when offspring mature at around two years old, they are often living nearby. Up to 80 hyenas are known to live in groups, known as clans.

Hyenas communicate by their ‘laughing’ calls – and by the posture of their bodies. In groups, the arrival of potential predators may be signaled in these ways. Whether finding termite hills, prey, or even refuge – are all thought to trigger communication within a clan!

How long have hyenas been around on Earth?

It's thought that hyenas have been around on our planet for approximately 24 million years! They have adapted to live in different regions including mountains, sub deserts, grasslands, and forests.

Yes, studies have shown that hyenas are highly intelligent. They have the mental aptitude to solve problems at a level akin to the problem-solving ability of chimpanzees.

Do hyenas eat or attack humans?

Hyena attacks can happen - meaning that it is always a good idea to be as safe around them as you can! They are wild animals, which means it is never considered safe to domesticate them.

Do you know any fun facts about Hyenas?  Share them in the comments below!

This page was last modified on February 17, 2022. Suggest an edit