When it comes to buildings that need to be on your bucket list, this is one that’s should be at the top. Forget the Empire State Building and the Eiffel Tower, and turn your attention to a building that was built centuries earlier.  Now sit back and enjoy these fun facts about Salisbury Cathedral!

It was formerly known as the Cathedral Church of the Blessed Virgin Mary — quite the mouthful!

2.    The cathedral is historically important.

The building is a key example of Early English architecture, and is an Anglican building.

It took 38 years to complete, with work not finishing until 1258. 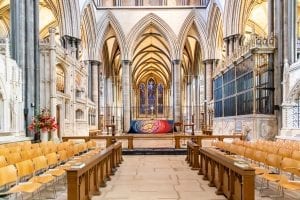 The ancient wooden scaffolding was never taken down from inside the spire.

The cloister and cathedral close measure 80 acres. This makes them the largest such spaces in Britain.

7.    It’s been telling the time for centuries.

It is home to the world’s oldest working clock, which dates from 1386!

8.    It’s a stronghold for important documents.

Salisbury Cathedral also contains one of the 4 original copies of the Magna Carta.

2008 was the 750th anniversary of its consecration.

10. It still has an important place in the modern church. 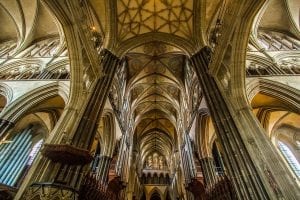 11. It was a replacement building!

The cathedral was originally a replacement for the deteriorating Old Sarum Cathedral.

What movie was filmed at Salisbury Cathedral?

Salisbury Cathedral has been seen on TV and in movies many, many times. Costume drama fans may recognize it most for having appeared in Sense and Sensibility back in 1995!

Is the spire at Salisbury Cathedral crooked?

Yes - the spire in the center of the cathedral certainly leans - thanks to it being so heavy!

Does Salisbury Cathedral have any stained glass?

Yes - there are at least eight stained glass windows in the cathedral, though they are only lightly stained.

Do you know any fun facts about Salisbury Cathedral?  Share them here in the comments below!

Are you fascinated with ecclesiastic buildings? Check out these fun facts about St Paul’s Cathedral…