Is there a more iconic city in Australia? Maybe – but to people all over the world, it’s the capital of sun, sea, sand, and an odd-looking building they call the Opera House. But how much do you actually know about this staple Down Under? Even if you’ve never visited Sydney or Australia before, there’s a good chance you know it by sight. It’s appeared on TV and in movies over the years – and it remains one of the most visually striking locations in the southern hemisphere.

Sydney remains a hugely popular holiday resort as well as a major city of commerce. It’s also one of the most fascinating cities in Australia to visit – and here are fun facts about Sydney to help show you why.

1. Where exactly is Sydney?

Sydney is in the state of New South Wales, Australia, situated on the south east coast.

2. Sydney is the capital of Australia… right?

Sydney is the largest city in Australia but NOT the capital – that’s Canberra!

3. What county is Sydney in?

The States of Australia are divided into counties, and Sydney is in the county of Cumberland. 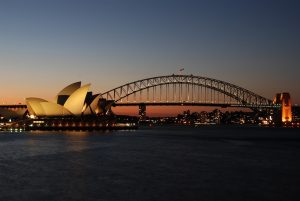 4. The Bridge here is a big tourist hotspot.

Sydney has a thriving port. The Sydney Harbor Bridge is one of its most famous landmarks and usually features in the New Year’s Eve fireworks display.

This is televised and shown around the globe as being one of the first places to celebrate New Year – thanks to time zone differences!

Another iconic landmark in Sydney is the Opera House, situated at the harbor – also known as Port Jackson.

6. A famous explorer helped to found the harbor.

Famed explorer James Cook, by then a Lieutenant in the English Navy, founded the harbor in 1770.

Cook gave it the name ‘Port Jackson’ to honor Sir George Jackson, who was Judge Advocate of the British fleet and a Lord Commissioner of the Admiralty.

Having been designed as a huge arch, the Sydney Harbor Bridge is sometimes referred to as the ‘coat-hanger’. The design was based on the Tyne Bridge of Newcastle, England.

9. Sydney is a river-filled city. 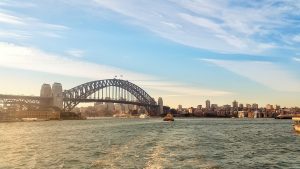 10. Sydney’s been around a long time.

Sydney was officially founded in 1788.

11. There are some huge bats down Sydney way!

Sydney is home to the ‘grey headed flying fox’, the largest bat to be found in Australia. Its wingspan can reach up to 1 meter! These bats live in the wild in and around Sydney.

From Sydney Harbor it is possible to take a cruise to some of the 13 islands nearby. These include Shark Island, a popular tourist destination. 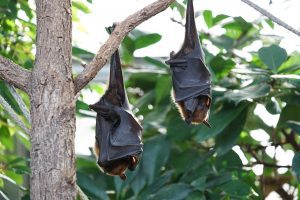 An adult only tour of the ‘Ghost Yard’ is an attraction for tourists interested in the paranormal! It’s found on Cockatoo Island, just outside Sydney Harbor.

Boats first sailed there when the island was founded as a ‘Prison’ in 1839. The prison was closed in 1869.

14. The mountains in Sydney are gorgeous.

Sydney is also well known for its spectacular blue mountains. These are carefully preserved by UNESCO, as they make up a designated heritage site.

An active Australian naval base is housed on Garden Island. As well as military personnel, the island is open to tourists travelling by ferry from Sydney Harbor. 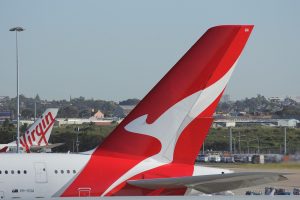 16. It’s the epicenter of air travel down under.

Sydney Airport, known originally as ‘Mascot airport’, was established in 1920.
4 million passengers were recorded as having used Sydney Airport in 2018. One of the world’s busiest airports, Sydney handles 45% of the air freight entering Australia.

17. Many, many people love the opera!

Over 10.9 million people are thought to have visited Sydney Opera House in 2018.

One of the most iconic and easily-identifiable buildings in the world, the Opera House has the distinctive shape of a series of shell-shaped, white sails. 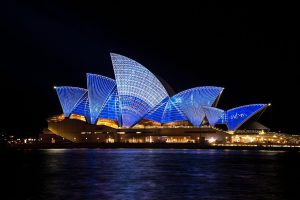 19. The Sydney Opera House was of Danish invention.

The Opera House was designed in 1956 by Jorn Utzon, a Danish architect. He entered a competition to produce the design of the building and won £5,000.

20. The Opera House was a long-term project!

The Sydney Opera House took 14 years to build – instead of an estimated four years!
10,000 workers were involved in the construction of the Sydney Opera House. They began in 1959, and it was officially opened by Queen Elizabeth on October 20th 1973.

The Queen has visited the Opera House four times. 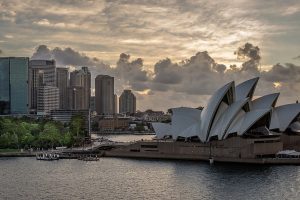 23. In fact, the first performer didn’t sing opera at all!

The first artist to perform at the Sydney Opera House – before it opened – but at the construction site – was Paul Robeson in 1960, when he sang ‘Old Man River’ to workers.

24. The Sydney Tower is another landmark in the city.

Popular with locals as well as tourists is the famous Sydney Tower. Easily identifiable by its simple yet dramatic shape, it is 300 meters tall.

At the top is a revolving bar and restaurant where guests can enjoy views of the city and hinterland. One spin or revolution of the restaurant takes approximately one hour and ten minutes. 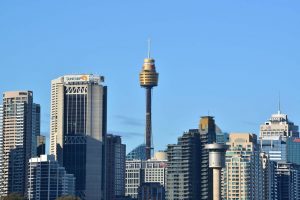 Sydney University was founded in 1850 and is now ranked as one of the top 50 in the world. The University has four university schools and five faculties.

Their motto, featured on their coat of arms, is ‘Sidere mens eadem mutato’. This can translate into either ’the stars change, the mind remains the same’, or ’the same learning under new stars’. The translation will likely change depending on who you ask!

27. Sorry to burst this bubble…

Fans of Disney and Pixar will likely remember the location of ‘P Sherman, 42 Wallaby Way, Sydney’ from Finding Nemo. However, this address doesn’t actually exist in real life – sorry to disappoint you! 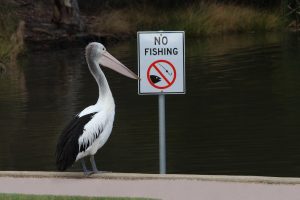 28. Sydney is a commercial powerhouse.

Sydney is said to be home of at least 50% of the top 100 businesses operating in Australia right now.

Is Sydney safe to visit?

Yes, Sydney is generally safe to visit, but as with any major city, always make sure to keep your personal belongings with you.

Is London bigger than Sydney?

No - in fact, Sydney is even bigger than Greater London!

Is Sydney more expensive to live in than New York?

Yes - the cost of living in Sydney has now increased to higher than that of NYC. It’s one of the ten most expensive cities to live in worldwide.

Do you know any fun facts about Sydney, Australia? Share them in the comments below?

Are you facsinated with Australia? Find out more with these interesting facts about Queensland.