The Dolomite mountain range in northeastern Italy is an idyllic playground for both outdoor adventurers and those seeking a taste of the region’s cultural heritage. Much of the region was Austrian until annexation by Italy after World War I, and the distinctive local cuisine reflects these roots, so expect lots of speck, sauerkraut, knödel, and strudel.

The Dolomites are a majestic mountain range offering picturesque views. Can you resist their splendor? Take in these fun facts about the Dolomites to find out more…

1. Where are the Dolomites?

The Italian Dolomite Mountains stand between Switzerland, Austria, and Italy as majestic protectors of an area filled with rich culture and customs.

2. They have a few different names.

The “Dolomites”, or “Dolomiti” in Italian, are also known as the “Dolomite Mountains” and “Pale Mountains”, the latter translated from the Italian term “Monti Pallidi”.

3. They are truly extensive!

The Dolomites cover an area of 1,419 square kilometers (548 square miles) and include nine mountain ranges. 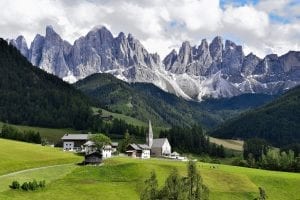 6. The range is named after a geologist.

The name Dolomites comes from the French geologist Dieudonne Dolomieu. He identified the calcium-rich rock, and it was named in his honor: Dolomite. This mineral can be found all over the Dolomites, and it’s what gives the mountains their tooth-like color and texture.

7. Could dolomite help our diet?

Although the research isn’t completely conclusive, dolomite could have some incredible health benefits when administered as a supplement. After being ground up, the stone acts as an effective vehicle to deliver calcium and magnesium and can help with heartburn. It can also strengthen bones.

The light grey rocks of the Dolomites are mostly sedimentary rocks, such as limestone, and dolomite. The area is famous for its quantity and quality of fossil reef specimens.

9. Burn some calories up here!

Various sporting activities can be undertaken in the Dolomites region, including mountain climbing, skiing, cycling, paragliding, and hiking. 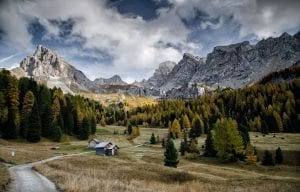 The region attracts all kinds of visitors, from people looking to get away from the city to serious adventurers.

11. The Dolomites were once fought over.

The Dolomites area was a battlefield during World War I, with fighting going on between Austro-Hungary and Italy. Evidence of the war can still be seen in the region.

The Dolomite Mountains have been scarred with the Via Ferrata or “Iron Paths”. The paths were created in World War I to assist the Italian military units as they traveled through the mountains to fight their enemies. The paths were used again in World War II. Today, the path is still lined with wire cables, ladders, and beaten paths – thus the name, Iron Paths.

The Dolomites have an alpine climate. This consists of rainy springs, short cool summers, dry falls, and long snowy winters. 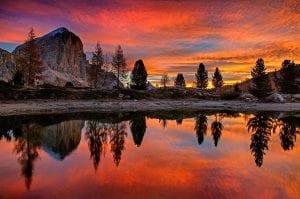 Weather forecasts in the Dolomites are fairly accurate over a two or three-day prediction period. Perfect for planning your outdoor adventures.

14. There’s actually a lot of people who live out here.

This mountain range is well-populated with people living in villages in five Italian provinces.

15. There’s a unique language in the Dolomites.

In addition to speaking Italian and German, the people who live in the Dolomites have their own language called Ladino after the Ladin people, who have lived there since the Bronze Age.

Today, about 30,000 people speak Ladino as their first language. 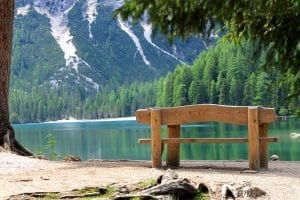 16. Be careful where you put your cabins!

The Ladin people love nature and either live in or commute to and from the cabins spattered across the Dolomite valleys. Some cabins are placed strategically, in the spots where cattle would huddle during lightning storms.

Culture in the Dolomites also places a heavy emphasis on handicrafts (such as woodcarving and leatherwork), food and wine unique to the region, music, and appreciation and conservation of nature.

The main north-south road through the Dolomites is called the Campolongo Pass. 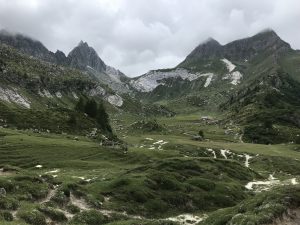 19. Mountaineers have tackled the peaks for decades.

English mountaineers first climbed the peaks of the Dolomites in the 1860s and 1870s.

The Vajont Dam in the southern Dolomites has over spilled twice due to heavy rain. On one occasion in 1963, this caused the local village of Longarone to drown and over 2,500 people were killed in the tragedy.

The Dolomites attract luxury and celebrities. Roger Moore’s James Bond whizzed down the ski slopes in the 1981 film “For Your Eyes Only”, but this grandeur and clientele don’t overwhelm the region.

Travelers looking for posh ski resorts will be right at home, as will those seeking rough adventures. 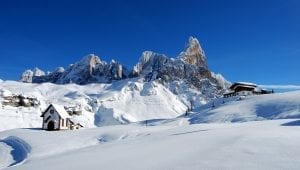 22. How long does it take to defrost a mummy?

The spectacularly preserved ice mummy Otzi was unearthed in 1991 on the Similaun Glacier, deep in the heart of the Dolomites. Originally it was speculated that Otzi died of exposure or natural causes, but investigation proved that he was shot with an arrow.

Want to see the famous iceman yourself? Visit the South Tyrol Museum of Archaeology in Bolzano, Italy.

The Dolomites were named a UNESCO World Heritage Site in 2009, and the mountain region features numerous nature reserves.

FAQs about The Dolomites

When is it best to visit the Dolomites?

Generally, it’s a manageable temperature without too many visitors between May and June - book a flight!

Are there trains that run from Venice to the Dolomites?

Yes! It’s entirely possible to sightsee in Venice and travel into the Dolomites on the train.

Are the Dolomites expensive to visit?

It does all depend on what you choose to do there - but the mountains here are said to be cheaper to visit than, say, the Swiss peaks.

Do you know any fun facts about the Dolomites?  Share them in the comments below!