The Rocky Mountains, known to millions as just ‘The Rockies’, is one of the most famous mountain ranges in the world.  Millions of tourists visit this US region every year, making it one of the most popular natural sites of interest in America.

But how much do you actually know about this mountain range, its history, and its various facts and figures?  Let’s take a look at few fun facts about the Rocky Mountains and see if we can test your knowledge.

1. You don’t have to be in the US to enjoy the Rockies.

The Rockies aren’t purely a US phenomenon. They span across Canada, stretching through the regions of Alberta and British Colombia.

2. It’s a state to state phenomenon.

You can find the Rockies in US states such as New Mexico, Arizona, Montana, Utah, Idaho, Wyoming and Colorado. Therefore, they certainly cover plenty of ground!  It’s also one of the biggest natural links between the US and Canada.

3. The Rockies are staggeringly tall…

At its tallest, the range extends to up to over 14,000 feet in height! Its tallest peak can be found in snow-capped Colorado, with Mount Elbert stretching up to 14,433 feet. 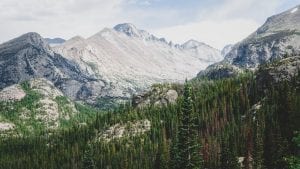 Many animals call the mountain range home. Across the mountains’ national parks, you will likely find coyotes, mountain lions, grizzly bears, black bears, marmots and elk.  The main Rocky Mountain Park also offers homes to wolverines and lynxes, who are thought to be rare.

The range is home to several national parks. The best-known of these include the likes of the Banff National Park and Jasper National Park in Canada, with the Rocky Mountain Park, Yellowstone Park and Royal Gorge all falling in the US.

6. Could we be due a mega eruption?

Yellowstone National Park in the US is home to a super-volcano which some believe to be overdue erupting. If it does erupt, it could scatter ash for thousands of miles, potentially putting millions of lives at risk.  However, experts believe that we have little to worry about – as eruptions seem to occur millions of years apart.  It’s also suggested by many that it may never erupt again!

7. Some Rockies are narrow, others are wide.

The width of each rocky can vary. At smallest, you are likely to find a peak at around 70 miles wide!  The longest is likely to be around 300 miles wide – they are colossal!

8. The area’s also known for its springs.

Banff National Park became hugely popular in the 1800s for its hot springs, which were said to be hugely effective in helping to cure aches and pains. Is it all a legend, though?

9. They’ve been around much longer than we have.

The Rockies are thought to date back up to 80 million years ago – much longer than the human race has been around to appreciate them.

In fact, the Rockies are thought to have been home to some of the first tribes of people. Ancient tribes, for example, may well have hunted mammoth and bison here. 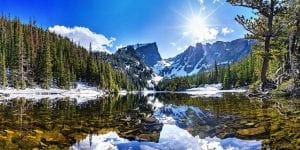 The Rockies are at risk of erosion, which can create deep canyons and chasms. However, this is natural for many mountain ranges, so it is unlikely to be anything to worry about.

There is a small tea house which sits 7,000 feet above a valley in Lake Louise, on the Canadian side of the Rockies. This tea house has been standing for over 100 years!  It’s something of a traveler’s refuge. 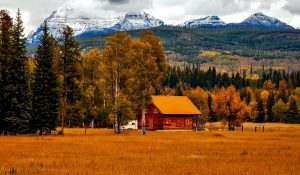 Fall in the Rocky Mountains

FAQs about The Rocky Mountains

Where do the Rockies begin, and where do they end?

End to end, the mountain range starts somewhere around the north of Alberta, Canada, and ends towards the Southern end of New Mexico.

Do the Rockies make up the longest mountain range in the world?

No - while the range is absolutely massive, the mid-ocean ridge remains the longest on the planet at more than 40,000 miles long.

Generally, if you want to travel to the Rockies at a quiet time, it’s worth traveling in late fall towards early spring.

Do you know any fun facts about The Rocky Mountains?  Share them in the comments below!