Have you ever watched a badminton match? If you have you’re probably familiar with its basics. Badminton is a court game that is played with lightweight rackets and a shuttlecock.

Over the centuries badminton has risen in popularity and is now played as a competitive game. It can also be a great social activity. If you’re on for a game, start by getting familiar with it through these fun facts about badminton!

1. The game has changed massively – it started in India!

Badminton is a game that has evolved over the years.

In the 18th century, badminton was played in India and was called Poona. The British Officers took a liking to the game and took it back with them to England where they renamed it badminton.

2. It was first played in Britain in royal company.

The game was officially played for the first time in the country estate of Badminton in Gloucestershire in England, the seat of the dukes of Beaufort.

The first official badminton club was established in Bath, United Kingdom, in 1877. It was called ‘The Bath Badminton Club’. It standardized the rules of the game and these were later recognized and published by the Badminton Association of England. 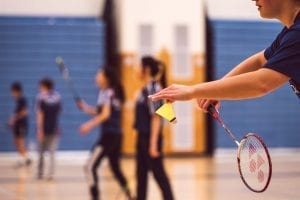 4. The oldest badminton tournament globally is based in England.

The All England Open Badminton Championship is the world’s oldest badminton tournament and was first organized in 1898. It is popularly referred to as the All England.

5. However, they love the game on the other side of the planet!

Badminton is the national game of Indonesia.

6. Badminton is thought to be the second most popular sport on the planet.

Badminton is second only to soccer in its popularity. It is estimated that across the world over 220 million people play the sport.

7. That goes for spectators, too.

Also, badminton is the next most viewed sport in the world. During its first Olympics appearance, a staggering 1.1 billion tuned in to watch badminton.

Badminton was accepted as a full medal Olympic sport in 1992 for men’s and women’s singles as well as doubles matches. Before that, it had been introduced as a demonstration sport in 1972 and an exhibition sport in 1988. In 1996, the mixed match was allowed.

9. Got six minutes for a match?

The shortest recorded badminton match in history was only six minutes, which is a very short game! This was in 1996 during the Uber Cup held in Hong Kong. 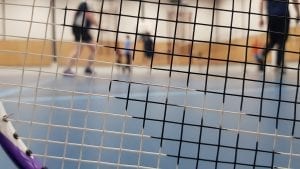 The longest badminton rally stretched over four and a half minutes and ended after 256 shots.

12. The shuttlecock has changed over the years.

Initially, the game was played with balls of wool and called ball badminton. This made it possible for players to play even in windy and wet conditions. Eventually, rules of the game were set, as was the use of the shuttlecock.

Now, badminton is played with rackets and a shuttlecock that is traditionally made with sixteen goose feathers.

13. It’s not a laid-back sport in the slightest.

Competitive badminton is fast and furious, and the spectators have to focus in order to follow the movements of the shuttlecock.

Over the years racket guts have been made by synthetic materials, but there was a time when the strings of badminton racquets were made by the lining of a cat’s stomach. 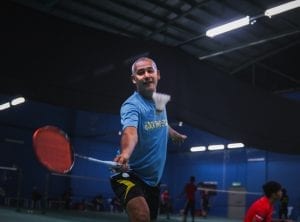 The standard length of the string used to gut a badminton racket is ten meters long.

15. A lot goes into making these rackets.

Modern badminton rackets are made of steel, aluminum, graphite, and boron. They cannot be longer than 68 centimeters and wider than 23 centimeters. The racket should weigh about 85-90 grams, and never more than 100 grams.

16. What do all those racket letters actually mean?

When you are shopping for a badminton racket you’ll notice that they’re marked with the letters U and G. While U refers to the racket weight, G describes its length. The rackets are categorized as 1U, 2U, 3U, and 4U. 1U is the heaviest and 4U lightest. 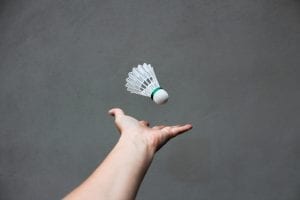 When players are playing a badminton match, their Wilson racquets are not allowed to make contact with the net.

The width of the lines of the badminton court is 40mm. They are painted white or yellow so that players can identify them easily.

The fastest smash recorded to date was at a shocking number of 493km/h. This smash was made by former Malaysian Doubles champion Tan Boon Heong.

During an actual competition, it is Mads Kolding of Denmark who has hit the fastest smash of 426km/h. 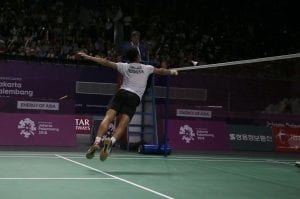 20. The game is generally played indoors.

Conventionally, badminton competitions are conducted on indoor courts. The movement of the shuttlecock is affected by weather, temperature, and altitude.

21. There’s a gigantic shuttlecock in Kansas!

An eighteen-foot high aluminum and fiberglass shuttlecock is installed and displayed on the lawn of the art museum in Kansas City. It weighs close to three tons and was made by Claes Oldenburg and Coosje Van Bruggen. 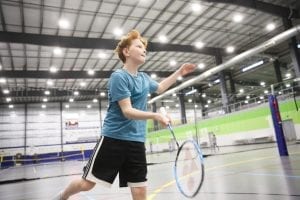 Is badminton a difficult sport?

Badminton is easy to get into and to start with, but to really progress in the sport, it takes a lot of energy, nerve, and focus!

Is badminton a good way to exercise?

Yes! Badminton tends to exercise all of the main muscles and body parts, and it’s a great cardio workout if you’re moving fast enough.

What happens if you accidentally touch the net?

It’s not the end of the world, but if your racket touches the net during play, the rally ends and the other player gets a point - it’s like a double fault in tennis.

Do you know any fun facts about badminton? Share them in the comments below!