Spider monkeys belong to the class of New World Monkeys and are believed to be the biggest of the different monkeys in that class.

They are closely related to humans and are found in abundance, and are used in a wide variety of laboratory experiments. Here are 9 more fun facts about spider monkeys that you might not have known!

1. Where do spider monkeys live?

Want to view the Spider Monkey in its natural habitat? You’ll need to travel to the topical rainforests of South and Central America.

2. Why are they called spider monkeys?

These monkeys get their name from their spider-like appearance when they hang from trees by their tails. Their prehensile tail is so strong that it can be used as another arm. There is a lack of hair on the underside of the tail of these monkeys which allows them to get a better grip on a branch while using its hands to grab its food (e.g. fruit).

Females play a leadership role within these troops. Female spider monkeys choose their mates to breed with and tend to make crucial decisions for the group. In addition, the group size is also determined by the alpha female of the group, according to Wildlife Waystation. 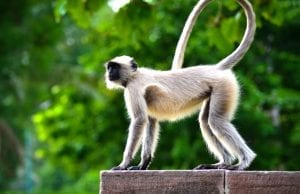 4. There are many different types.

There are 7 different species of spider monkeys and they are all under the threat of extinction (especially the brown spider monkey and black-headed spider monkey).

There are no thumbs on the hands of spider monkeys. They are more specialised and have evolved away as thumbs are no longer needed by these monkeys. The absent of the thumb provides the spider monkey better grip when swinging from branch to branch.

6. Spider monkeys are big on supporting the ecosystem.

Spider monkeys are one of nature’s crucial spreaders of seeds from fruits, plants and flowers. It would be extremely difficult for new vegetation to grow within the forest areas without the help from these monkeys.

7. Spider monkeys warn each other.

Spider monkeys depend on their vocalisation to warn others of potential predators or problems, protecting their young, bonding and even for the protection of the environment.

8. They are big fruit eaters.

Fruits are vital for spider monkeys and they primarily depend on it (90% of their diet consists of fruit).

They open their mouths wide to swallow the fruits whole instead of nibbling on them. The digestive system of these monkeys is able to handle this with ease. This is done so it reduces the time for the monkeys to look for food.

9. They need to keep a watchful eye.

Although spider monkeys do not have many predators, eagles and other large birds of prey are worth keeping an eye out for. Owls and Hawks tend to feed on young spider monkeys. The jaguar is one of the prime predators of the spider monkey. 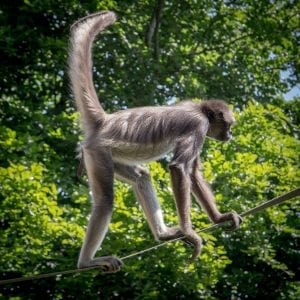 What’s so special about the spider monkey?

Spider monkeys have amazing tails - they act like additional limbs!

Can spider monkeys kill you?

A spider monkey bite can send you into anaphylactic shock - so try not to get on the wrong end of their choppers!

Spider monkeys do not do well when domesticated, so make sure to give them a wide berth!

Do you know any fun facts about the spider monkey?  Share them in the comments below!

Are you interested in discovering some more memorizing monkey facts? Check out these fun facts about chimpanzees