Virginia Woolf remains perhaps one of the most-read and most important authors of all time. Her famous novels have made their way to the big screen on multiple occasions, and what’s more, many people have referred to her as a woman ahead of her time!

Sadly, her life behind the books was fraught with tragedy – but let’s celebrate her works and remember her legacy. Here are some fun facts about Virginia Woolf you may wish to remember for quizzes to come.

1. She was a prolific writer.

Virginia Woolf wrote a variety of fiction and nonfiction books. Titles include The Widow and The Parrot, The Duchess and The Jeweler, To The Lighthouse and Mrs Dalloway. Her most celebrated works were written between 1925 and 1927.

2. She started writing at the very start of the century.

Woolf actually released her first novel, The Voyage Out, in 1915. However, this book was around nine years in the making, and was originally called Melymbrosia.

3. Her novels are sometimes romantic, but are often dreamy.

Romantic stories about running away with a lover, or unrequited love, became variations on a theme for a number of Virginia Woolf’s books – and real life, too! She was a trailblazer in romantic fiction, though often on a tragic basis.

However, Woolf was also well-known for writing in a challenging narrative style. Her first book, The Voyage Out, is noted for offering dreamy writing styles, and may not be the easiest book to follow! 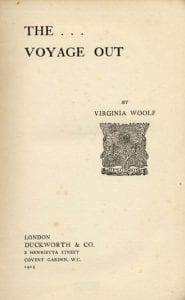 4. Many, many people read and enjoy her work.

Woolf’s books have been translated into more than 50 different languages worldwide, making her one of the most-read authors of all time.

5. Her life was tragically short.

6. Hogarth Press was a Woolf creation.

Woolf established Hogarth Press with her husband Leonard, and they ran a publishing firm out of their house.

Hogarth Press published quite a few popular authors and notable names! They published the likes of TS Eliot and noted psychoanalyst Sigmund Freud.

Woolf is also regarded as one of the most pivotal figures in early feminism. She used her popularity and her platform to portray her views at a time when women were only just starting to break through the highly patriarchal British society. As such, many people study and revere her as a trailblazer for the feminist movement.

Virginia Woolf was also a keen art lover, and in fact wrote about artistic theory alongside her celebrated works of fiction.

9. Her novels are modernist classics.

The works of Virginia Woolf are also generally studied in literature circles as being part of the modernist movement, which emerged in the early 20th century. Other popular writers of this period included the likes of TS Eliot and Ezra Pound. 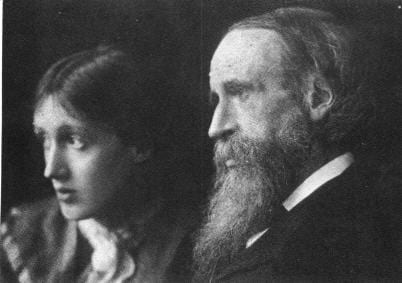 Virginia and her father, Leslie

10. The seaside had a big impact on her life.

Much of Woolf’s writing was inspired by the British seaside, with the Godrevy Lighthouse down near Porthminster Bay being particularly inspirational for her novel To The Lighthouse. However, she used to summer a lot down in St Ives, and coastal locations pop up a lot in her books.

It’s safe to say that Woolf’s novels are not always the easiest to read for entry-level speakers of English - they include a lot of heavy imagery! However, they make very rewarding reads.

Was Virginia Woolf a socialist?

Virginia Woolf was not known as a socialist, though she was known as a radical feminist during her time. She’d also written about politics in essays occasionally.

Why was Virginia Woolf such an important writer?

Woolf’s novels are some of the most challenging of the period in that they used incredible imagery and dreamscapes. However, Woolf was also a noted essayist, having published her opinions on topics as wide as artistic history and on women’s writing. She also had a strong interest in writing about politics.

Do you know any fun facts about Virginia Wolf? Share them in the comments below!