Hedgehogs are friends of gardeners, loved by children of all ages, and can seem like cute little characters! However, they can be deadly thanks to their sharp spines. Apart from when mating, hedgehogs enjoy living alone, rummaging around gardens, or hiking through the countryside. Let’s take a look at some fun facts about hedgehogs below.

1. Why are they called hedgehogs?

Hedgehogs took their name from the habitat they prefer, that of hedgerows where they forage for food – principally insects, beetles, and caterpillars. Also, their snouts resemble the snouts of pigs and so they gained the latter part of their name, ‘hog’.

Hedgehogs were once more commonly called ‘urchins’. As they were easily identified by their spined bodies, it was decided that rounded sea creatures with spines should be named ‘sea urchins’!

3. Defence is the best form of offense!

When threatened, or sometimes about to hibernate, hedgehogs curl up into balls. Their undersides are not covered in spines – as is the rest of their body. This means that their undersides are tender and vulnerable! To protect this sensitive area hedgehogs instinctively curl up so their spines form a strong shield of self-defense. 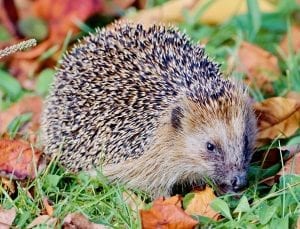 4. It’s extremely unlikely you will spot a hedgehog in sunlight.

Hedgehogs are nocturnal creatures. They sleep during the day in secluded spots where they may burrow – they like piles of leaves or even happily doze in unoccupied sheds!

5. Many people choose to make life easy on the hedgehog.

If you are lucky enough to have hedgehog visitors, you may make them feel extra welcome by making them a little house of their own! A small wooden box with an entrance can offer them a draft and rainproof home.

6. Hedgehogs are one of many species that hibernate during colder seasons.

Hedgehogs hibernate between October and April. Can you blame them, honestly? Before hibernation hedgehogs eat more to build up reserves to sustain them during their long sleep.

7. Should you ever wake a hedgehog up?

Hedgehogs may need help waking up if they have been hibernating longer than their reserves can sustain them. Beyond three months, gently rouse them and have some food available.

They are intolerant of milk and products made with it! Only give them water to drink – you can trust us on this one! 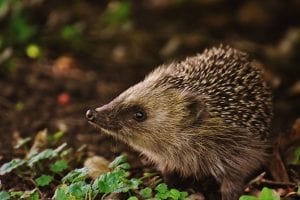 10. Hedgehogs can even take to water quite well!

Hedgehogs can swim. Their spines have an air cavity which helps them remain afloat!

11. You can’t expect a hedgehog to stand guard!

Hedgehog eyesight is infamously poor – they tend to fall back on their fantastic hearing and smell receptors – and why not, if they work well?

It’s thought that hedgehogs have bad eyes as a result of when they’re active. As they only normally come out at night, their eyes are not adapted to daylight hours. 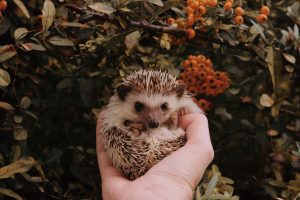 While it’s tempting to try and adopt a hedgehog, they are still wild animals – and in California and Hawaii, it’s illegal to own them! They are considered endangered species in many areas.

While they are certainly not aggressive, hedgehogs can carry nasty diseases and fungi, meaning that they can potentially infect you if you’re pranged. Be careful handling a hedgehog if you have to!

Rarely! In fact, most of the time, hedgehogs will only bite or nibble if they think they’re about to eat. They are very well protected by their spines, so there’s no need to munch!

In some cases, yes - hedgehogs can carry fleas, parasites and other pathogens. Therefore, always make sure to wash your hands if you ever handle a wild beastie!

Do you know any fun facts about hedgehogs?  Share them in the comments below!

This page was last modified on January 3, 2022. Suggest an edit