Heathrow started life in 1930 as a single grass runway.

2.   London Heathrow Airport employs more people than you might imagine

Based in West London, near Hounslow, Heathrow airport employs a staggering 76,000 people – that’s the same population as Bracknell. 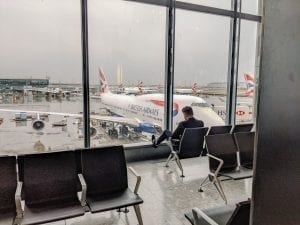 4.   In fact, the number of flights is pretty impressive too

1,400 flights take off and land at Heathrow every day – one flight every 45 seconds!

5.   Want to travel? Choose from the most popular Heathrow destinations

6.   The busiest airport in the world… For quite some time

Until recently, London Heathrow was the busiest airport in the world (by passenger traffic).  In 2019 it ranked at #7.

Before Heathrow had 5 numbered terminals, ‘Europa’ and ‘Oceanic’ were its 2 main terminals.

There’s one more ‘secret’ terminal – terminal six.  It’s a very small terminal exclusively used for VIPs and includes the Windsor Suite which is for members of the Royal family, visiting dignitaries, and heads of state, and some celebrities.  It costs £1,500 per person per visit to use. 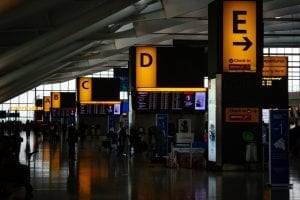 10. The northern runway  vs. the southern one

Heathrow’s Northern runway is longer than the Southern, running a length of 2.425 miles.

11. A supersonic journey from Heathrow to JFK

What happens to animals arriving or leaving London Heathrow Airport?

Hundreds of thousands of animals transit through London's Heathrow airport every year. A special ‘Animal Care Centre' is situated near terminal 4. It is temperature controlled with a spacious outdoor exercise area.

What animals are flown in and out of Heathrow Airport?

Who looks after the land at Heathrow Airport?

In 2021, the contract for land management at the airport was given to the company Glendale. The five year contract was secured for a fee of £3 million.

Do you know any fun facts about London Heathrow? Share them in the comments below!

Are you fascinated with all things aviation? Check out these brilliant facts about British Airways…