The Colosseum is a truly magnificent artifact based in the heart of Rome, Italy – and what a sight it is! Not only is it a magnificent structure, it’s also incredibly historically important. As you can imagine, millions of people visit the Colosseum each and every year.

It’s got a bit of a reputation for bloodsport – if you’ve ever seen Gladiator starring Russel Crowe, you’ll know what we are talking about! Nowadays, however, it’s played host to concerts, plays and more besides.

But how much do you really know about this ancient structure? Let’s dive into a few fun facts about the Colosseum that might just surprise you…

Before the 2020 pandemic, around four million people were visiting the Colosseum each year – this number is likely to pick up again!

2. It was largely built by slaves.

The Colosseum was built over a period of a decade by around 100,000 slaves – and it was eventually finished by 72 AD.

The Colosseum remains the biggest amphitheater ever built – at least, that we know about. It’s around 188m long, and 48m tall. 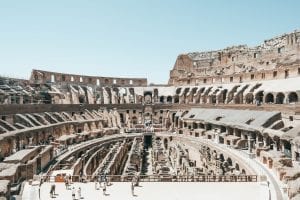 4. It had a reputation for combat and gladiator games.

5. However, it was used for more than just bloody battles!

It’s thought that the Colosseum was even used for concerts and artistic displays – tasteful moments, not just combat!

6. It was an impressive building job.

It’s thought that the lake at Emperor Nero’s Golden House had to be drained to help built the Colosseum – and it was built with Tivoli stone and volcanic rock – as well as iron clamps, to help hold everything together!

Believe it or not, the Colosseum was actually commissioned as a ‘gift for the people of Rome’. That, at least, was the plan of Emperor Vespasian.

8. Many, many people died here.

Of course, as a result of the combat games that took place at the Colosseum, it’s thought that more than 400,000 people have died here – and that was within just 40 years of it opening!

The Colosseum is absolutely riddled with trap doors – there’s more than 30 of them, so be sure to watch your step! 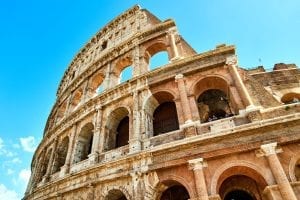 10. It was purposely flooded!

Weirdly, Emperor Titus once ordered the Colosseum to be completely flooded! This was in the name of a display – showing off the disputes of Syracuse and Athens.

Yes, the Colosseum can still house tens of thousands of people who want to watch live events – up to 80,000 people, in fact! It’s also played host to huge musical stars, such as Paul McCartney and Elton John.

The Colosseum has had plenty of natural disasters come its way – it’s fallen into disrepair a couple of times over the centuries thanks to lighting and earthquakes. However, preservation schemes have helped keep it safe for centuries now. 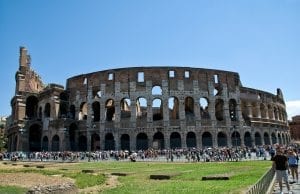 13. Christmas is big at the Colosseum.

Yes – believe it or not, you’ll see the Colosseum fully dressed in all manner of lights and decorations during the festive season!

FAQs about The Colosseum

Is the Colosseum wheelchair friendly?

Yes, the Colosseum has been adapted to allow ease of access for wheelchairs. It has different entrances and even has elevators fitted to help you in and out of the stands!

How much do guided tours of the Colosseum cost?

Guided tours of the Colosseum are likely to cost up to $70 - and that’s for a tour of medium length, so it’s worth checking prices for shorter and longer tours, too.

Did female gladiators ever fight at the Colosseum?

Yes! It’s a myth that all gladiators were male. In fact, two infamous female gladiators, Achillea and Amazon, have gone down in legend. By 200 AD, however, Emperor Septimus had banned women from the games outright.

Do you know any fun facts about the Colosseum? Share them in the comments below!

Are you fascinated with the history of Rome? Check out these interesting facts about Ancient Rome.