Camels are some of the most fascinating and endearing animals on the planet – even though they have a propensity to spit and to get a bit grumpy! But how much do you really know about camels? Take a look at these fun facts about camels – some might well surprise you!

There are some odd superstitions around as far as camels are concerned. One of the oddest, in fact, comes from tank drivers during the Second World War. German tank operators believed that driving their vehicles over camel dung would bring them good luck in the battles to come.

The word camel is Arabic. It actually means ‘beautiful’, or close to it – beauty is in the eye of the beholder, after all!

However, it’s not the only word in Arabic associated with the beast. It’s thought that there are up to 160 words, if not more, for camels.

3. Camels really do withstand the heat.

Camels are extremely hardy in dry conditions, especially when the wind starts to pick up. Believe it or not, a camel is able to close its nostrils entirely, so that sand and grit from passing sandstorms are unlikely to get up and irritate them! 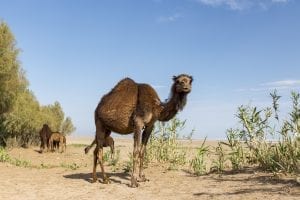 They can do similar things with their ears, too. While they can’t actually close their ear holes, they are furry and insulated so that sand can’t get in and do serious damage. A camel is an evolutionary marvel as far as adapting to desert conditions is concerned!

In fact, there’s a famous joke along these lines – what do you call a three-humped camel? Humphrey!

Camels can go without food and water for long periods, thanks to the fact that they store fat in their humps. They can live off these to ensure they have nutrition while traveling long distances.

A camel can lose around 10% more water than other mammals before becoming dehydrated. That means a camel isn’t ever likely to be as thirsty as you think it might be.

Believe it or not, an average camel is likely to swallow up to 40 gallons of water in one go! That, at least, should keep it protected and ready for traversing the arid sands and plains.

Camels can famously spit. This is a defense mechanism, meaning that if a camel feels angry or threatened, it will spit at you from long distances to get you to back off. 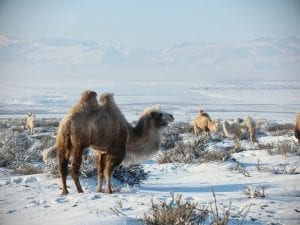 10. They are the taxis of the desert.

Camels are generally used as transport in many areas. They can carry people as well as cargo, and it’s thought that the average camel may be able to hold up to 900lbs at a time for up to 25 miles each day.

Despite their curmudgeonly appearance and habit of spitting, camels are very affectionate and kind creatures!

Are camels faster than horses?

No - while camels may look speedier in some ways, they run at half the pace of your average, healthy horse.

It is extremely rare that you will see a camel swim - it has no need to - but they can tread water to an extent.

Do you know any fun facts about camels?  Share them in the comments below!