With a name like Death Valley, how could you resist taking a closer look? That’s about all there is to say by way of an introduction… so sit back and enjoy these 11 fun facts about Death Valley:

2. There is literally nowhere more arid in the states.

It’s the driest place in the whole of America.

3. There have been long stretches without rain.

1929 was the year in which not a single drop of rain fell! 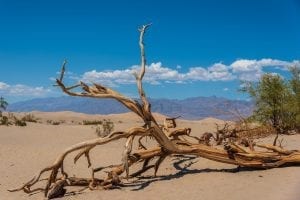 5. Leave the frying pan at home…

It’s also known as the hottest place on Earth. You can fry an egg on the ground here with ease!

Despite its name, the valley floor is covered with yellow flowers in the spring months.

700 lb rocks have been leaving trails for years as they apparently move by themselves. These huge rocks actually move due to intense night temperature freezing the flash flood water.

Strong following winds then blow the rocks across the mud thanks to the lack of friction provided by the thin sheet of ice underneath.

8. The singing dunes are enormous!

The Eureka Sand Dunes are a staggering 680 ft high.

The sand then slides down so fast that it causes a high pitched noise which sounds like the desert is singing to you. 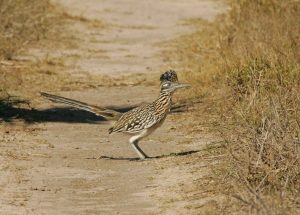 Roadrunners are one of the few animals who call Death Valley ‘home’.

Artists Drive is a section of Death Valley which features vibrant, multi-colored hills as a result of the various oxides in the soil. 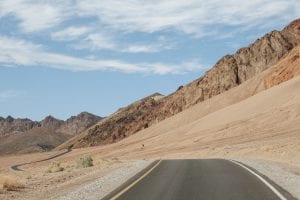 Is Death Valley hotter than the Sahara Desert?

Yes - massively so. Temperatures in the Sahara can reach around 104 F… the highest temperatures recorded in Death Valley spiked at more than 134 F!

Does it rain at all in Death Valley?

Yes - but very sparingly. You’re only likely to see around two inches of rain per year in Death Valley!

Are there any plants that live in Death Valley?

Yes, surprisingly, there are more than 1,000 different plants that live and thrive despite the super dry climate here!

Do you know any fun facts about Death Valley?  Share them in the comments below!