Have you ever seen an Emu run? They’re so fast that it’s beyond belief! With good eyesight and amazing agility, emus can escape any trouble. Even so, when they must defend themselves, they strike and rip with their heavy feet and nails.

Emus serve an important role in their habitats as seed dispersal specialists. Speed and importance, is that all? Find out more with these fun facts about emus…

Emus belong to a group of flightless running birds known as ratites, the most primitive of the modern bird families. The ratite family includes the kiwi, ostrich, cassowary, and rhea, all birds found only in the Southern Hemisphere.

The emu is the second-largest living bird in the world (the ostrich is the largest).

3. What they lack in the air, they make up for on land.

The common emu may not be able to soar, but for such a big bird it sure can run.

This flightless bird has small wings relative to the size of its body. Its long, powerful legs, though, allow it to run up to about 30 miles (50 km) per hour.

While running, the emu’s stride can be almost 9 feet (2.7 meters) long. Their strong legs also allow the bird to jump 7 feet (2.1 meters) straight up. 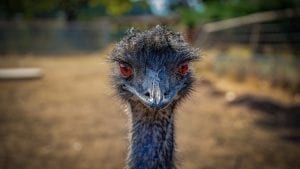 The emu has two eyelids. One eyelid is used for blinking, while the other prevents dust and sand to enter the eyes.

Emus have good eyesight and hearing, which allows them to detect threats at some distance.

5. Ever seen an emu feather close up?

Individual emu feathers have a loose and simple design. Most birds have one feather per follicle, but the emu grows a double-shafted feather from each follicle.

6. They’ll kick you into touch!

Each emu foot has three forward-facing toes that allow it to grip the ground, thrusting the bird forward. A powerful kick is also handy for keeping predators at bay.

7. Trust us – those are some powerful legs!

Emus are the only birds that have calf muscles.

8. They are pretty hefty.

They’re found primarily in Australia, but also in New Guinea, Indonesia, Solomon Islands, and the Philippines. 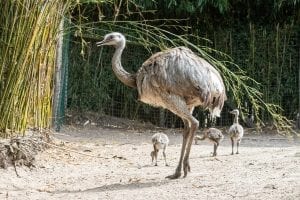 10. Their feathers are built to beat the heat.

Emus beat the heat in hot, arid habitats: Their greyish-to-brownish body feathers provide almost complete protection from solar radiation. Though equipped with this natural sunscreen, they also live in grasslands, savannahs, and forests, preferring areas with access to standing water.

11. The emu diet is rather varied.

Emus are omnivores (eat both plants and animals) and look for food during the day. They eat a variety of plants, depending on the season.

They require a large amount of water, drinking 9-18 liters (2.5-5 gallons) daily. If not disturbed, they may drink continuously for ten minutes.

Emus in captivity have been known to eat shards of glass, marbles, vehicle keys, jewelry, nuts and bolts, and other shiny objects.

14. But, there is some reasoning here.

They swallow small stones (called gastroliths or gizzard stones) which stay in the gizzard and help grind up food.

They mate and nest over the Australian winter, and it’s not always a loving affair, females have been known to fight viciously over unpaired males. 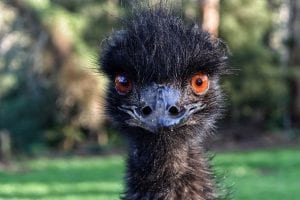 The emu has a pouch in its throat that it uses to make booming grunting sounds to communicate during mating season.

These calls are usually made during courtship and the breeding season heard up to 1.2 miles (2 km) away!

17. The female emu is dominant.

Adult female emus are larger and heavier than males.

18. They mate for short periods.

Mating pairs stay together for up to five months, after which females lay large, emerald-green eggs in expansive ground nests. 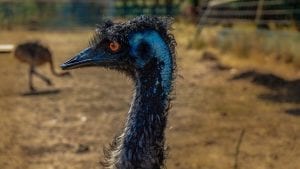 19. Men take on the childcare.

The males incubate the eggs for about eight weeks without drinking, feeding, defecating, or leaving the nest.

One emu egg has the same weight and volume as 10 to 12 chicken eggs! The eggs are dark green and shiny, with small pits on the surface.

Roosting males lose up to a third of their body weight while incubating eggs.

The females, meanwhile, have often moved on, sometimes mating with a different male in the same season. In a good season, a female emu may lay three complete clutches! 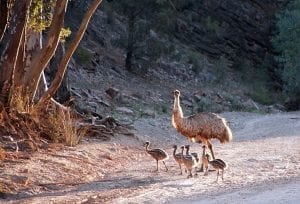 Chicks can walk just minutes after hatching and can leave the nest at about three days old. But they usually stay with their father for about 18 months.

23. The emu has lots of predators.

Predators of the emu include dingoes and wedge-tailed eagles. Snakes and other nest-raiders devour emu eggs, but they’re not the only ones.

Humans farm emus for their meat and eggs, too. One emu egg can make an omelet big enough to feed four to six adults. 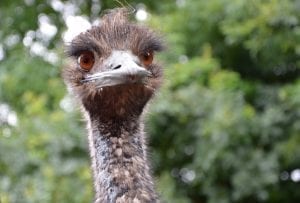 Emus are good swimmers and don’t mind taking a dip in a pond or lake.

The first occurrence of identical bird twins was discovered in the emu. 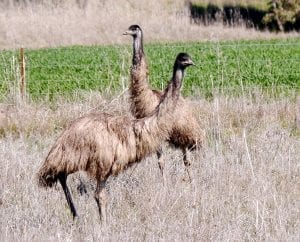 Emus are inquisitive birds and have been known to approach humans if they see an unexpected movement of a limb or piece of clothing. In the wild, they may follow and observe people.

30. Australian must love them!

More than 600 places in Australia are named after the emu.

The Australian coat of arms has the image of an emu and a kangaroo – both animals that cannot back up.

The emu has a prominent place in Australian Aboriginal mythology, too, including a creation myth of the Yuwaalaraay and other groups in New South Wales who say that the sun was made by throwing an emu’s egg into the sky. 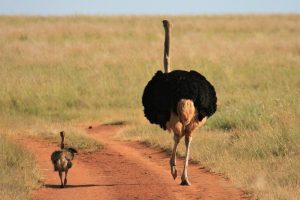 No - emus are some of many birds that are grounded - they have feathers, but can’t fly.

Can emus live with chickens?

Providing you allow them to grow up with other birds, they will normally get on fine with chickens.

Yes, emus are considered fairly intelligent, however, there are birds considered smarter - such as those in the Corvidae family.

Do you know any fun facts about emus? Share them in the comments below!

This page was last modified on September 17, 2021. Suggest an edit