Norway is one of the most popular Scandinavian countries for tourists, and the citizens seem to love it here, too! It’s widely regarded as one of the happiest places on Earth – move aside, Disneyland!

Norway is the land of Vikings, longboats, and a taxation system that seems to serve the citizens well! There’s more to Norway than just lights in the sky and woolly jumpers, however – here are some fun facts about Norway that might just fascinate you.

Depending on the language you speak, Norway is known by one of three names. Speakers of the Norwegian languages, Bokmål or Nynorsk, call Norway ’Norge’ or ‘Noregare’.

2. It’s the Gateway to The Arctic.

To many, Norway is known as the Gateway to the Arctic – part of the Arctic Circle actually intersects the country. Therefore, you’ll likely want to pack yourself some thermal clothing!

Tourists and locals flood to see a spectacular natural feature – the Northern Lights, or Aurora Borealis! These lights in the sky are said to be best seen from Norway, though you can also spot them in Canada and across other Scandinavian countries. However, there are tourism packages and tours in Norway based wholly around the lights. 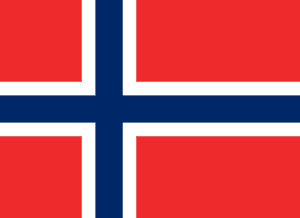 4. Oslo is proud of its Viking roots.

Oslo, the capital of Norway, is home to a national Viking Museum in which many artefacts are displayed. These include a 9th century Viking ship! You can hardly escape the Viking legend when visiting Norway, so grab a horned hat and enjoy some mead!

5. Vikings soon moved on from Norway.

The age of the Vikings is recorded from the 8th to 10th centuries. During this time their reputation and activities spread. After Norway, they went on to found Reykjavik, Dublin and then settled in Normandy!

Norway has been inhabited since 9,000 BC. An indigenous people known as the Sammi have a long history there! Originally Reindeer herders, they continue to work on the land, and also have impressive musical skills which draw crowds.

Reindeer thrive in Norway and are used for tourism, their coats and even for meat. It is not unusual to see Reindeer meat on the menu – it’s found in local sausages and meatballs, for example!

8. Here’s a local conundrum for you…

Norwegians can’t agree on the length of their coastline! When looking at roughly straight lines, some say the coastline measures approximately 1,650 km. Others say that, taking into account all the nooks, bays, fjords and tiny islands it is far longer – up to 63,000km! Which do you believe?

Norway has an extremely low crime rate and that contributes to its high rank on the Global Peace Index. Since 2013, it has ranked amongst the top 10 countries to live. In 2017, it took first place in the same survey! 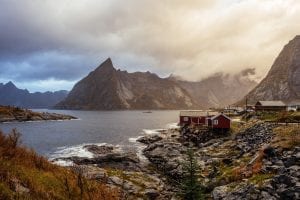 10. Taxation pays for all kinds of perks in Norway!

Norway workers pay a high rate of tax. At up to 45% income tax, benefits are impressive. Social services allows for free healthcare, for example – and all levels of public education are free.

Norway currently has more electric cars per capita than any other country in the world!
Every driver of an electric car in Norway also benefits from free parking and reductions on the price of ferries.

Norwegians love skiing and winter sports. Schoolchildren are taught how to ski cross country ski – this may be a reason Norway does so well at the Winter Olympics! 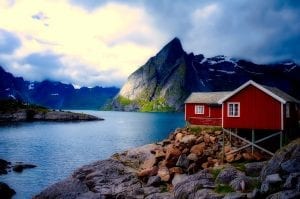 How big is Norway?

What is the national drink of Norway?

The national drink of Norway is Schnapps. Also called Akevitt or Aquavit, it is a pale yellowish color. It is made from potatoes!

What are the main industries of Norway?

The main industries of Norway are shipping, timber production, tourism, agriculture and fishing. Supporting the nation is their extremely successful renewable hydro-power production. This supplies a whopping 98% of their electricity.

Do you know any fun facts about Norway? Share them here in the comments below!

And if you’re fascinated about Scandinavia, check out these interesting facts about Finland