Ever been skiing before? It’s likely to be some of the best fun you can have with snow – short of building snowmen, we’d wager! However, skiing remains a massively exhilarating and exciting pursuit. It can take some time for you to learn how to master the sticks and skis, however, once you hit the piste with style, you’ll be sailing across the snow like no other.

Skiing has a fascinating history, and there are plenty of facts worth sharing about the pursuit. Here are just a few fun facts about skiing to whet your appetite.

Skiing has been a racing sport for decades. In fact, the first ever downhill skiing race is said to have taken place in 1879, in Sweden. Scandinavia tends to be a fantastic hotspot (or cool spot) for winter sports thanks to the peaks and the climate.

2. Let’s dispel that myth about hyphens…

Skiing as a word is fairly unique. It’s the only word with six letters and with two ‘i’s in the middle. And no, contrary to some belief, there is no hyphen in the middle.

Switzerland is seen by many to be the skiing capital of Europe. But did you know that it was Sherlock Holmes creator Sir Arthur Conan Doyle who brought the sport to Swiss attention? It’s thought that he gained a taste for the activity while holidaying in Norway and would take his own skis to try the Swiss landscape. Conan Doyle predicted that Switzerland would become a fantastic resort for skiing in years to come – and let’s just say he was spot on in that assumption. 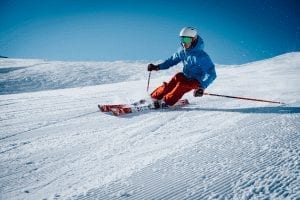 4. Skiing became a staple pastime thanks to the Olympics.

Skiing is, of course, a huge staple of the Winter Olympic Games. Alpine skiing, in particular, first emerged at the Games in the winter of 1936. However, it wasn’t until years after the Second World War that many people were able to try it out for themselves.

5. It might be an older sport than we think.

However, despite skiing being a relatively modern phenomenon in its current form, there is evidence to suggest that people have been enjoying skiing down slopes going back millennia. Believe it or not, it appears to have been created by the Chinese!

6. Skiing on the Moon? Anything’s possible.

Harrison Schmitt, a seasoned astronaut, believes that skiing and space travel should come hand in hand. At the very least, Schmitt believes that cross-country skiing techniques will be very helpful in traversing the Moon. Does this mean that we will see cosmic skiing holidays set up there in the centuries to come? We can dream!

Norway and Sweden, of course, are two countries which really lead the charge in terms of ski resorts. Norway, in fact, has an army with a ski unit. Believe it or not, it’s been in place since the early 18th Century, and it was the first army in the world to establish such a unit.

8. Providing you kit up, skiing is safer than you think.

While many people assume that skiing is inherently dangerous – and it really can be – the chance of dying as a result of skiing accidents is relatively low. According to the NSAA (the National Ski Areas Association), the chance of skiing fatalities rolls in at about one in a million. Even so, that’s no excuse to go lax on the safety wear!

The word ‘ski’ is, you guessed it – Norwegian. At least, it derives from a similar word, which actually refers to a wooden split. Pretty apt, given that’s what skis are – split planks! 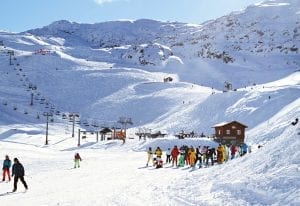 There is, believe it or not, a patron saint of skiers. St Bernard of Montjoux is one of the more modern saints, having achieved the status in the 1920s. He was active in helping people across the Alps.

11. It’s possible to ski faster than a car – if you’re a professional.

Some skiers are able to travel faster than modern transport. In fact, the fastest skier on record is Simone Origone, who recorded a speed of around 156 miles per hour. That’s likely to outstrip the capability of most cars, not just the speed limits!

Skiing is a fantastic pursuit if you want to keep fit. It’s thought that skiing for up to an hour might burn 400 calories. However, your weight and exercise intensity will likely affect these figures! 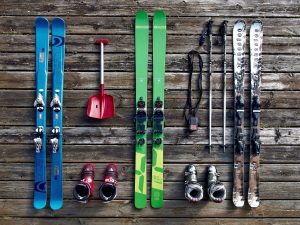 Many, many people living in the alpine regions of Europe know how to ski. In fact, it’s thought that 25% of people across Norway, Switzerland and Austria know how to ski comfortably.

Is skiing really dangerous for a beginner?

Oddly, skiing is pretty much as dangerous as any other sport - just make sure you wear the right gear.

Why should you wax your skis?

Ski waxing makes sure that the wood is supple and streamlined - dry wood is going to be really slow in the snow.

Why do skiers lean forward?

Skiers don’t lean forward for speed - they do it for balance - otherwise, you’re at risk of toppling forwards or rolling back.

Do you know any fun facts about skiing? Share them in the comments below!

Are you fascinated with skiing? Ever thought about trying it on water? Find out more with these facts about water skiing