The way in which the world uses power is always changing. For decades, we’ve been dependent on fossil fuels. That is, fuel which comes from our oceans and from the ground. However, major pushes to go greener – and to look for sources of renewable fuel – have been picking up in a big way.

One of the fastest-growing sustainable energy production options is, of course, solar energy. Why run power through limited oil and coal when you could harness it from the Sun? Here’s a few fun facts about solar energy to fill you in.

1. Solar helps at home and at work.

People all over the world are taking advantage of solar energy, both at home and at work. It’s possible to set solar panels up on your roof and to generate energy to sell back to power companies.

2. Could an hour of the Sun help you?

It’s thought that just an hour of direct sunlight could be enough to power the planet for up to a year – it’s worth trying to harness as much as you possibly can!

You won’t need to point your panels directly at the Sun to benefit from energy extraction. In fact, even running solar panels during overcast periods will continue to derive energy. You never need to make sure the Sun is shining directly on your panels – otherwise, you’d have to keep moving them around!

While territories such as the US and Australia are big adopters of solar energy, it is China who seems to be leading the charge. It’s thought that China has been installing around four times the number of panels for their homes than what the US has managed in a single year.

6. Solar energy can heat up a lot.

It’s thought that up to 70% of energy and power derived through solar panel fittings and solutions can be used to heat water up to 60 degrees Celsius.

It’s also entirely possible to cook food and to dry clothes using solar energy alone – and by that we don’t mean by leaving things out in the Sun!

7. Solar power’s been going for some time.

Solar panel cells have been around longer than you might think. In fact, Russell Ohl developed the first specific solar power cell back in 1941. Long before that, Alexandre Becquerel was responsible for finding the properties of photovoltaics – which enable us to create energy from the Sun. This discovery was made all the way back in 1839!

8. Could solar get us on the road?

It’s entirely possible that solar power may be able to power large transport vehicles. For example, there are efforts to try and build solar-powered airplanes – a fantastic, self-sustaining idea!

9. Head to California for the solar power capital.

California is home to the biggest solar energy plant in the world, stretching up to 1,000 acres – and it’s based in the Mojave desert. 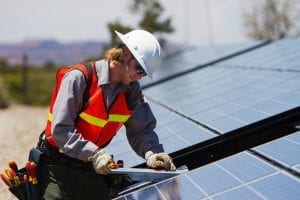 Solar energy is, simply put, power we get from the heat, as well as the light, from the Sun!

Is solar power a bad idea?

Not on the whole, but research suggests solar power generation may create greenhouse gases.

How long do solar panels last for?

It’s thought that current solar panel technology can last for up to 50 years.

Do you know any fun facts about solar energy?  Share them in the comments below!

This page was last modified on December 10, 2021. Suggest an edit