The Niagara Falls is one of the most famous tourist destinations in the world. If you’re looking to brush up on your knowledge, this list provides all the interesting and mind-blowing facts about these spectacular waterfalls.

1. There are more than a few falls here.

The Niagara Falls is in fact made up of three different waterfalls known as the America Falls, the Bridal Veil Falls, and the Horseshoe Falls.

2. A staggering amount of water cascades!

The names given to each of these waterfalls were due to specific traits. For example, the Horseshoe Falls name comes from the horseshoe shape of the falls. American Falls is due to it mostly being over the border of the US while the Bridal Falls was named because it resembled a bridal veil. 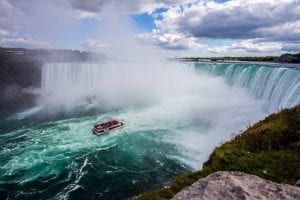 4. Sailing down the falls? Get the checkbook out!

The first person to go down the waterfalls was a 63 year old schoolteacher known as Annie Taylor. To make an attempt now to go over the Falls is illegal. Anyone who tries this will be fined $10,000!

5. The Falls area is thousands of years old.

The Niagara Falls is estimated to be around 10,000 years old. New rivers and landscapes were formed from the glaciers when the last Ice Age began to change around 12,000 years ago. This resulted in the creation of the Niagara River, which led to the birth of Niagara Falls shortly after.

6. Tightrope walking was a fad out here.

The first being in 1859, many people have attempted to tightrope walk over the falls. Nik Wallenda was the recent walker, and he had to get permission from the governments of both America and Canada. In addition, he was required to present his passport upon crossing the border, despite walking on a tightrope.

With visitor numbers continuously rising, it is estimated that around 30 million people visit these famous waterfalls every year. While some visitors simply take a quick snap, others stay to explore everything it has to offer. The Mist Boat cruise is one of the more popular attractions, which takes the visitors right to the waterfalls.

8. Fish that fling down the falls probably live to tell the tale.

It is estimated that 90% of the fish that plunge down the fall survive.

To use the amount of water that Niagara Falls flows every second, it would take an average household around 7 years.

These extraordinary waterfalls are the largest producer of electricity in New York. On the Niagara River in 1881, the first hydroelectric station was built.

New York City’s Central Park creator and designer was so taken in by the beauty of the falls that he prepared and authored a petition which urged many political and cultural figures to acquire private lands that are located around the falls in order for the preservation of the area. 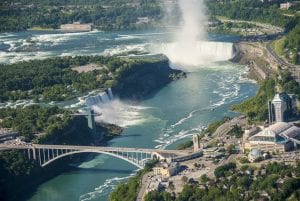 What was found when the Niagara Falls were drained in 1969?

How long until Niagara Falls is gone for good?

50,000 years - according to erosion statistics - which means the Niagara River will disappear, too.

Can you swim in Niagara Falls?

No - there is a massive risk of loss of life, and reportedly, a very painful death!

Do you know any fun facts about Niagara Falls?  Share them in the comments below!