Tsunamis are devastating natural events that only occur under very specific circumstances.  But when they do hit, they have the power to devastate lives.

These huge, cataclysmic ocean events are, however, scientific marvels – which are still being studied to this day.  Here are some truly interesting facts about tsunamis.

1. A tsunami is bigger than you think.

A tsunami is more than just a big ocean wave. In fact, it’s a cluster of several.  You will generally find a tsunami occurs when there has been seismic activity under the water, or if there has been a landslide nearby.

However, other disasters are known to trigger tsunamis. They generally emerge in the Pacific Ocean and can trigger through earthquakes and volcanic eruptions.

3. What does tsunami mean?

The name ‘tsunami’ is Japanese, which translates roughly into English as ‘harbor wave’.

When a tsunami hits, it hits quickly. A tsunami can travel around 800km per hour, and can go undetected before it reaches a shoreline.

Tsunamis can vary in size a lot. Some are 30 feet tall and can be devastating once they reach civilization.  Others, however, are only a few feet high, and you can barely notice them out at sea.

The biggest tsunamis, however, can be as tall as 100 feet, even more. It is these wave trains which will, of course, cause the most concern.

6. The after-effects of a tsunami are colossal.

A tsunami is not just devastating on impact. Not only does it have the power to destroy communities and kill people, its after-effects can cause widespread disease and malnutrition.  This, it’s believed, is due to the immense amount of salt a colossal wave can sweep into a community.

7. Many lives have been lost to tsunamis.

A huge tsunami in the Indian Ocean in 2004 traveled to 11 different countries, across East Asia and Africa. It’s thought to have claimed more than 283,000 lives.

8. They are huge problems in the east…

However, the US is also at risk. Specifically, the state of Hawaii is always on high alert.  They generally expect at least one big tsunami annually.  However, even bigger wave trains can land every six to seven years, meaning Hawaiian communities need to be especially protective.

9. They have immense stamina.

Believe it or not, tsunamis don’t lose their energy as they move across expanses of water. Coupled with their immense speed, this explains why a huge tsunami can affect so many different countries in one go. 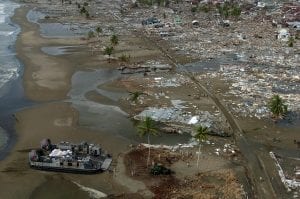 Tsunamis are also extremely long, as well as often being very tall. They’ve been known to stretch as long at 100km in length.

11. We’ve suffered from them for a long time.

Tsunamis have been around for millennia. Ancient Greek writings speak of underwater earthquakes, and scientists believe they go back even before human civilization started building.  Some believe that an ancient meteorite struck the Earth billions of years ago, causing one of the very first tsunamis of their kind.

If you ever get caught in a tsunami, you should never try to swim away. The best thing you can do is float with the current – by holding onto an object, if you can, while the disaster persists.  It is always best to let the water direct you. 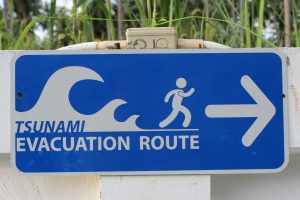 What was the worst tsunami ever?

The worst tsunami on record at the time of writing was the Indian Ocean storm, that hit on December 26th, 2004. It claimed more than 230,000 lives.

Is a cruise ship likely to survive a tsunami?

Believe it or not, experts believe that a cruise liner is generally unlikely to feel the force of tsunami waves while sailing.

How can you tell if a tsunami is coming?

If you can see it, it’s too late - but you can tell one is due to hit if you can feel shaking in the ground, and water receding from the shore.

Do you know any interesting facts about tsunamis?  Share them in the comments section below!

This page was last modified on October 16, 2021. Suggest an edit

⛵ 17 Fun Facts about The Mississippi River