Located in the north-western part of South America, Ecuador is one of the most biologically diverse countries in the world, and as such, its impact on the environmental sciences has been remarkable. Many scientific expeditions lead by renowned researches including Charles Darwin were based in Ecuador and helped to establish the basic theories of modern geography, ecology, and evolutionary biology.

Ecuador offers a wealth of diversity that can easily steal your heart, the famous Galapagos Islands, picturesque colonial towns, the Amazonian rainforest, the spectacular peaks of the Andes, and more. For a closer look into the country’s impressive nature and culture, we’ve prepared these 15 interesting facts about Ecuador…

Despite its relatively small size, Ecuador hosts approximately 10% of the world’s biodiversity. Divided by both the equator and the Andean mountain chain, and bordered by the Pacific Ocean, Ecuador includes four distinct regions each with its own natural and cultural beauty, charm, and value.

The country has about 23.056 reported taxonomic species of animals and plants, which comprises 6.1% of all reported species on a global scale. 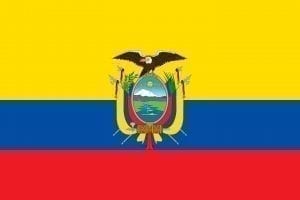 This fascinating protected Ecuadorian National Park and Biosphere Reserve is one of the most bio-diverse places on Earth! Hidden deep in the heart of Ecuador’s Amazon rainforest, it boasts of species that are completely unique to the lands. In fact, the country has more trees, amphibians, and bat varieties in only 100km than anywhere else in the world!

A well-known fact is that the equator runs through the country, hence the name! Ecuador means equator, or officially “República del Ecuador”, meaning the Republic of the Equator.  It’s also the only country in the world named after a geographical feature.

If you’re heading in to the jungle for a Ray Mears style adventure, then head for the coordinates of 0.1500° S, 78.3500° W to land yourself in Ecuador! The Ecuadorian Amazon offers a one-in-a-lifetime opportunity to experience the rainforest in its unspoiled state. 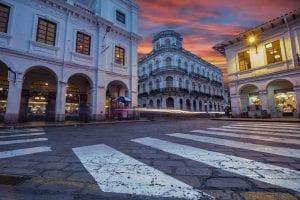 Ecuador’s total land area is 109,483 square miles or 283,560 square kilometres, slightly larger than the UK. The country’s terrain changes wildly throughout the country. In fact, flowing into inter-Andean central highlands and into a delightful coastal plain there is a flat-to-rolling eastern jungle.

The country ranks at 67 in the list of countries by population and has a population density of 71 people per km2 or 184 people per mi2. Another interesting fact regarding Ecuador’s population is that the residents are known as Ecuadorians! 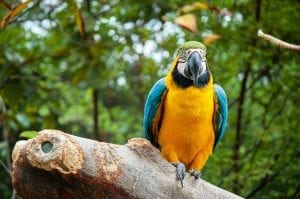 Ecuador’s capital is Quito, formally Saint Francis of Quito, with an area of 125 square miles, or 324 square kilometres, and a population of 1.7 million in 2015. It’s the country’s most populous city and stands at an elevation of 2,850 metres or 9,350 ft. above sea level. In fact, it’s the second-highest official capital city in the world and the closest one to the equator.

Ecuadorians enjoy a tropical climate along both the coast and in the Amazonian jungle lowlands, which becomes cooler in the central highlands. Being located on the equator, most of the country, except the Sierra, experiences a humid tropical climate – it receives more than 20 inches of rain a year, while the southern coast and the plateaux receive 30 to 80 inches (760 to 2,000 mm). 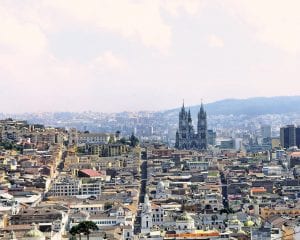 Ecuador’s official language is Spanish. An Inca language, called Quichua, is spoken by the indigenous  population. In Ecuador, besides Spanish, ten other native languages are spoken, with English being the most spoken foreign language.

If you want to buy your Jugos (delicious fruit juices), exchange your spending money for U.S. Dollars, the official currency here. In fact, since 2000 when Ecuador’s currency, the “sucre,” took a dive due to a financial crisis, the local inhabitants started using dollars and it wasn’t long before the government accepted the USD as the official currency. 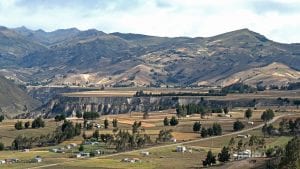 If you do, be careful, you’ll have to abide the rules! In fact, if you want to import a car to Ecuador, it has to be less than a year old, or with no more than 1000 km on the clock, otherwise, it won’t be allowed in!

According to the latest World Health Organization’s data announced in 2018, the life expectancy in Ecuador for males is 74.1 years, and 78.9 years for females, giving an average  of 76.5.  This puts Ecuador in 49th place on the World Life Expectancy ranking list. 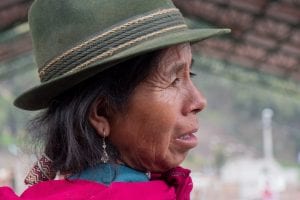 The country’s industry includes petroleum, food processing, textiles, and metal work. Ecuador grows bananas, cacao, coffee, rice, and balsa wood, and the Ecuadorians rear cattle and catch fish. As one of the world’s biggest producers of fruit, Ecuador has been producing around 1/4 of the world’s bananas, for the last 60 years.

According to statistics Ecuador exports petroleum, bananas, shrimp, cacao, and coffee, and its main export partners are the U.S, Vietnam, Chile, Panama, and Russia. The country is the larger exporter of sweet bananas to Europe.

Do you know any interesting facts about Ecuador? Share them in the comments below!

Are you fascinated with South America? Check out these fun facts about Brazil!