Alcatraz is an island situated off the Californian coast near San Francisco – and it’s been made all the more famous by the 1979 film ‘Escape from Alcatraz’! However, have you actually toured the island yourself? Here are some fun facts about Alcatraz that might just impress you!

There are seriously strong currents in the stretch of water between Alcatraz island and San Francisco. Nonetheless, swimmers regularly take to the water to make the crossing – some compete to beat record times!

2. The route from San Fran to Alcatraz is longer than you think.

The crossing from the San Francisco coast to the island is roughly 1.25 miles over fairly shallow water.

3. There was a fort here before a jail.

Alcatraz island became the base for a military fort before it became an infamous prison.
There was a lighthouse there too, which still exists today. 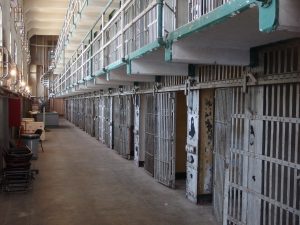 4. The island went through a bit of a rough patch.

When Alcatraz jail closed, many buildings fell into disrepair and the lighthouse caught fire. The lighthouse survived, thankfully, and the former prison eventually opened as a museum and tourist attraction!

5. The jail was actually only open for thirty years!

Alcatraz became a federal jail on August 11th 1934. It remained a prison until 1963, when it was decided that transporting water to the island and removing waste from the area was physically unviable.

6. Many people know the island – and jail – because of the movie.

Much interest surrounded the closure of Alcatraz federal jail. It had gained notoriety as a secure place to house the most dangerous of criminals. Attempts had been made to escape and later a film, based on a true story, made Alcatraz even more famous.

7. The movie was a box office smash.

The film broke box box office records, making $5.3 million in the first weekend of being screened on 815 screens in the USA and Canada. Having been made for a budget of $8 million, the film’s success was doubtful during planning.

8. The true story really took off.

In 1963 a book was written based on the confession of Frank Morris from his death bed. He told of the escape and the roles of the Anglin brothers, co-conspirators in the daring plan. J Campbell Bruce wrote the book – and never imagined it would draw such interest!

The convicts escaping from Alcatraz were infamous and violent criminals, portrayed by the famous actors Clint Eastwood and Patrick McGoohan in the movie. The grim yet thrilling film has a runtime of 112 minutes. 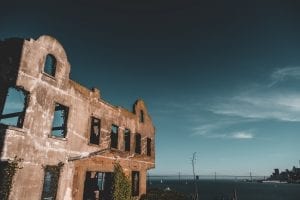 10. You can take a tour around Alcatraz!

Ferries depart from the mainland to transport tourists to the island. Visitors can explore the land surrounding the prison and have guided or independent audio tours one inside, too!

Run by the Parks department, volunteers are welcomed to help keep the island and prison in good condition for tourists. Upon working 250 hours, volunteers are awarded free tickets for museums, too!

In 1972, Alcatraz island became part of the Golden Gate Recreation Area. Tours there last up to five and a half hours, if you’d like to go along! 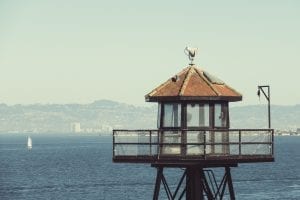 Alcatraz, like many tourist attractions across the US, was hit heavily by the COVID-19 pandemic. However, after a long period of closure, the island and its tours finally started opening up again in March 2021!

Are there any former Alcatraz prisoners who are still alive?

Believe it or not, there are still a handful of Alcatraz prisoners who are thought to still be with us. The Anglin brothers escaped and are never found, either!

Who was the youngest inmate at Alcatraz?

Alcatraz’s your best inmate was Clarence Carnes, otherwise known by his nickname the Choctaw Kid. He was born in 1927, and later died in 1988.

Are the sharks circling around Alcatraz?

Yes, there are great white sharks around the Bay Area, however, not in the sense that Alcatraz is an island circled by sharks!!

Do you know any interesting facts about Alcatraz?  Share them in the comments below!