Viva Las Vegas – land of casino gaming, glitzy shows, and sell-out tours for magicians, musicians, and more. It’s thought to be a major driver for tourism in the state of Nevada, US, and over the years, it’s seen plenty of growth. However, even if you’ve been to Las Vegas on holiday before, there may still be plenty of facts and figures out there likely to fascinate you.

Las Vegas is just as famous for its big-money opportunities as it is for its stunning desert backdrop, as well as its unique ‘resident’ performers. It’s pretty safe to say that each trip out here is likely to be different in one way or another! And, as they say – what happens in Vegas, stays in Vegas! Here is a full stack of fun facts about Las Vegas before you plan your next trip to the strip.

1. What does Las Vegas mean?

The name Las Vegas is Spanish, and means ‘The Meadows’.

Las Vegas is situated in the state of Nevada and is close to the borders of Arizona and California.

Known as a city of contrasts that ‘doesn’t sleep’, Las Vegas has a multi-story skyline in its central commercial sector and is surrounded by colorful rock formations of dramatic mountains from the Nevada hinterland. 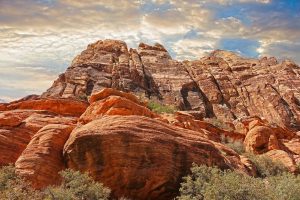 The colorful rock formations in Nevada

At the end of 2017, the Las Vegas City Council decided to abandon its current logo of pink lettering in favor of a more formal ‘disc’ logo. This new logo features an example of the city skyline against the backdrop of the countryside.

5. Trees in the area have adapted well.

Not surprisingly, given its desert-like climate, local trees and wildlife have adapted accordingly. Hardy, drought-resistant plants in the area include the Bottle Tree, Sweet Acacia, and – of course – Palm Trees.

Las Vegas’ water is supplied by the Colorado River. The flow is being carefully monitored as it is reducing annually. By mid-century, unless there are significant changes, the water level could reduce by up to 30%.

7. How many people live in Las Vegas?

The metropolitan area of Las Vegas (including suburbs and hinterland), however, has a population of 2,621,000.

There are just over 10,000 taxis registered in Las Vegas. There’s always a chance you’ll be able to hail a cab!

The famous Route 66 highway is within driving distance of Las Vegas and many tourists hire cars to drive at least part of this iconic route. Some even take helicopter tours to view it from above, as well as the Hoover Dam. It’s a popular area to tour from above as well as on foot. 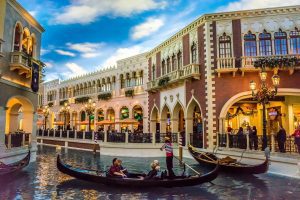 Not Venice, but Las Vegas!

Perhaps most famous for gambling and entertainment, Las Vegas casinos are open 24 hours a day, seven days a week. Fortunes are won and lost on a daily basis!

Many artists and performers return to Las Vegas year after year and some have ‘resident’ shows. ‘Cirque de Soleil’, for example, is a troupe that always proves popular, with many people booking to see them in Las Vegas months ahead of time.

12. Ramsay’s got a restaurant here!

Gordon Ramsay, the English chef, has a Fish and Chips shop on ‘The Strip’ in Las Vegas. Meals there are prepared and served in the traditional English manner.

13. You’ll spot Trump’s tower from a mile away.

Donald Trump is well-known for hosting a hotel in Las Vegas. It’s easy to spot thanks to its gold, reflective sheen.

15. The Strip once went by a different name.

The road now nicknamed ‘The Strip’ was once called ‘The Las Vegas Boulevard’.

The strip is approximately four miles long and home to some of the most opulent and expensive brands in the world. 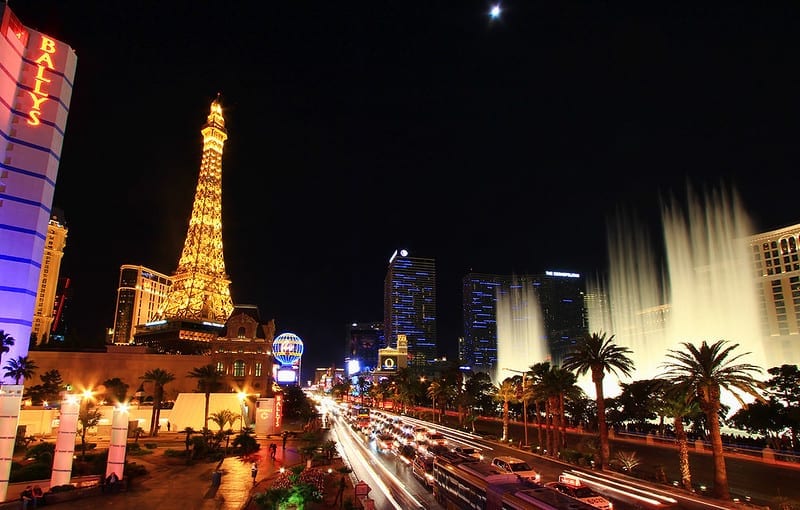 16. It’s all about those amazing colors.

At night, the strip lights up in a kaleidoscope of colors, as lights and lasers provide a spectacular show, whichever direction you choose to look.

17. Many are committed to keeping Vegas clean.

The public services of southern Nevada have helped to set up the Rebel Recycling Program. Representatives contribute their time and resources, in order to maintain the beauty and cleanliness of the city.

A coalition called ‘Keep Las Vegas Beautiful ‘ is focusing on monitoring the cleanliness of the city. Members, mostly volunteers from all walks of life, have formed groups to choose and ‘adopt’ pieces of land and to be responsible for ‘caretaking’ it.

Las Vegas elects its mayor by vote, usually to serve a term of four years. The current mayor at the time of writing is Stavros Anthony.

Mayor Anthony has been a resident of Las Vegas for over 35 years and is well known in the community as previously serving as a Captain in the Metropolitan Police. 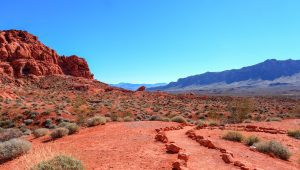 19. This famous statement is around 20 years old.

The famous phrase ‘What happens in Vegas, stays in Vegas’ was first launched in 2003. It was created by the R and R Partners Agency, who sought to devise a publicity statement to promote the city as somewhere people could feel empowered by ‘freedom’.

The High Roller Ferris wheel in Las Vegas is currently the world’s tallest – at 550 feet or 168 meters.

It takes 30 minutes for one full revolution of the High Roller. It’s a popular photo hotspot as well as a site for many a proposal. It was first opened here at the end of March 2014.

21. Flamingos are protected here, too!

There is a Flamingo sanctuary based in Las Vegas. It is not only protecting the birds, but also other protected species including koi carp.

The sanctuary is free to enter and enjoy, with the establishment having created a visually impressive habitat. It’s therefore a popular holiday resort not only for casino fans but for animal lovers, too! 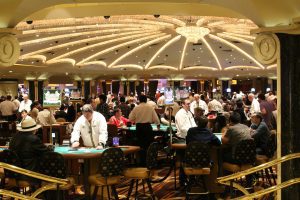 22. There are lots of famous Vegas neighbors.

Many celebrities choose to live in Vegas or at least close by! Some famous people with homes in Las Vegas include the singer Celine Dion, magicians Penn and Teller, tennis champion Andre Agassi, and former First Lady Patricia Nixon.

Vegas is also home to America’s wealthiest self-made billionaire, Sheldon Adelson – who has an estimated fortune of between $32 and $33 billion.

Is Las Vegas safe to visit at night?

On the whole, Las Vegas is very much safeguarded at night - however, crime does exist, so be careful!

Can you drink the water in Las Vegas?

Yes, it’s safe to drink from the faucets in Las Vegas. However, the taste has people split in terms of opinion!

How long does it take to walk the Las Vegas Strip?

It’s likely it will take you around an hour and a half to walk the whole of the Las Vegas strip.

Do you know any fun facts about Las Vegas? Share them in the comments below!

This page was last modified on January 12, 2023. Suggest an edit