When we think about John F Kennedy (JFK) it’s only fair to start with one of his famous quotes: “Every accomplishment starts with the decision to try”. Fifty six years after his assassination people still remember him as a gifted orator, a peacemaker, a fighter for social justice who inspired hope.

He remains one of history’s most intriguing figures and one of America’s favourite presidents. There is still so much controversy regarding his assassination. What happened on that tragic day? In his words “with the decision to try” let’s read these interesting facts about the JFK Assassination that’ll bring us closer to the truth:

1. JFK arrived early in Dallas the day he died.

On the 22nd of November, 1963, President John F Kennedy and his wife Jackie Onassis landed in Dallas. They arrived at Love Field airport at 11:37 a.m.

2. The Kennedys rode in a custom-built car.

The presidential couple joined Governor John Connally and his wife, Nellie, in an open convertible. The car was custom-made, reinforced parade limousine built in January 1961 by the Ford Motor Company.

3. The couple had plenty of backup.

Behind the Presidential limousine was an open “follow-up” car with eight Secret Service agents instructed to scan the area.

The streets were crowded with people excited to see the Kennedys. 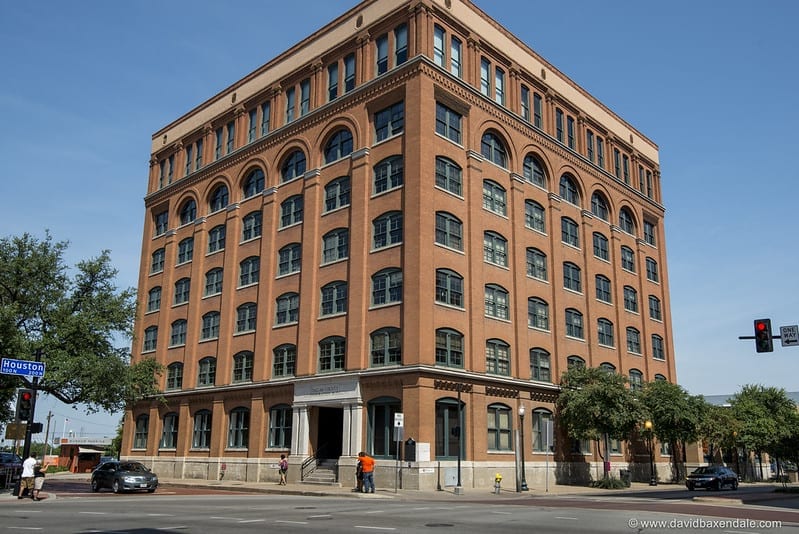 5. The shooting took place at a book depository.

The car turned off Main Street at Dealey Plaza around 12:30 p.m. As it was passing the Texas School Book Depository, there was gunfire.

The president was shot once in the neck and once in the head and he fell into Mrs. Kennedy’s lap. Governor Connally was also shot – in the chest with one bullet.

7. The car moved at a blistering pace to try and save the President and Governor’s lives.

Agent Kellerman instructed the driver, “Let’s get out of here; we are hit”, and “Get us to the hospital immediately.”

8. They were immediately taken to hospital.

The president and Connally were taken to Parkland Memorial Hospital just 3.4 miles (5.5 km) away at 12:36 p.m.

9. Tragically, JFK was beyond saving.

At Parkland, the President was immediately treated by a team of physicians who had been alerted for the President’s arrival by the Dallas Police Department but there was no hope.

A Catholic priest was summoned to administer the last rites, and at 1:00 p.m. John F. Kennedy, the 35th President of the United States was pronounced dead at the age of 46.

10. Disturbingly, it wasn’t the first killing of its kind in the US.

This was the fourth presidential assassination in America’s history.

Dallas businessman Abraham Zapruder caught the assassination on his 8 mm home movie camera. Zapruder’s film was later bought by Life magazine for $150,000.  That’s lot of money even today, but  the actual value today with inflation added is over $1.25 million!

12. Eyewitness stories conflict with one another.

Witnesses at the scene of the assassination saw a rifle being fired from the sixth-floor window of the Depository Building, and some witnesses saw a rifle in the window immediately after the shots were fired. 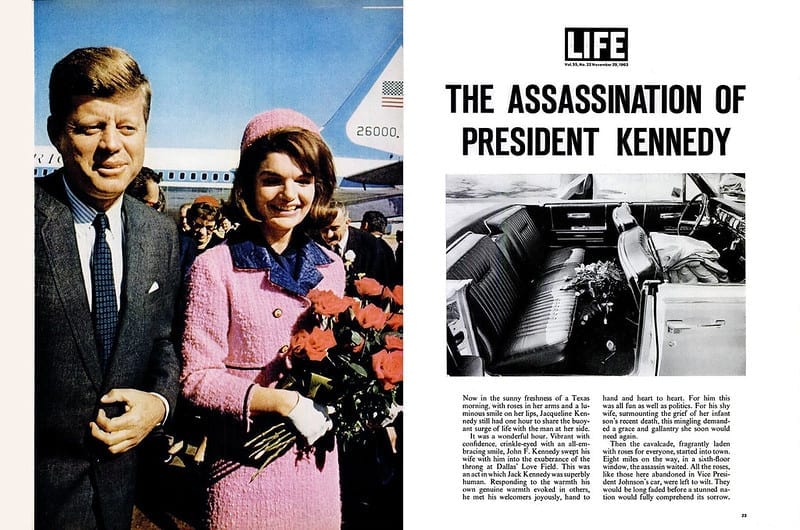 13. The culprit has always been known – allegedly.

Allegedly Lee Harvey Oswald, who was working for the Texas School Book Depository – a private firm that distributed textbooks – fired three shots at Kennedy from the open window.

14. The same goes for the murder weapon.

16. Oswald was apprehended at the pictures.

Oswald was arrested in a Texas movie theatre, less than 90 minutes after Kennedy’s shooting. The film on the screen was called: War is Hell! 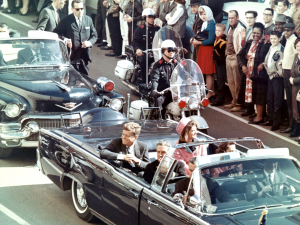 He was a former U.S. Marine who embraced Marxism, had Soviet citizenship, and lived in Russia for three years.

During his interrogation, Oswald denied any guilt. He told the reporters: “I didn’t shoot anybody, I’m just a patsy”.

19. However, things just got more twisted from there.

On Sunday morning, November 24, Oswald was being transferred to the county jail from Dallas Police Headquarters.

He was shot by the night club owner – and police informant – Jack Ruby at point-blank range on live TV.

Oswald was brought to the same Parkland Hospital as JFK only 48 hours later and shortly after was pronounced dead. 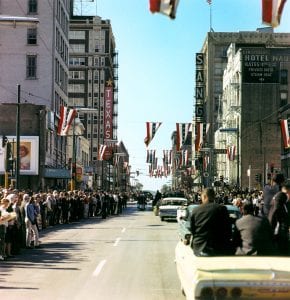 At 2:38 p.m., 1 hour and 38 minutes after Kennedy was pronounced dead, Vice President Johnson took the oath of office inside the plane. Jacqueline Kennedy, still wearing her bloody clothes, stood at his side. Judge Sarah Hughes wept as she administered the oath of office.

22. JFK’s funeral emulated that of another assassinated President’s.

23. But is that really the end of the story?

FAQs about the Assassination of JFK

How many times was JFK shot?

John F Kennedy was shot twice, however, some eyewitnesses believe they heard or saw four shots in total.

Jack Ruby was eventually sentenced to death for the murder of Lee Harvey Oswald, however, he died of a pulmonary embolism before he could sit re-trial via appeal.

What is the ‘Grassy Knoll Theory’?

The theory regarding a grassy knoll refers to a small hill just off the motorcade near where JFK was shot - where some theorise that another assailant was hiding and made shots from.

Do you know any interesting facts about the JFK assassination?  Share them in the comments below!