The ancient Mayan Empire remains one of the most fascinating, and certainly one of the most studied. Hailing from Central Mexico, they are named after Mayapan city, an ancient capital. In fact, Mayapan is thought to have been the last city of the old civilisation to fall.

Think you know all there is to discover about the Ancient Mayans? No one truly knows it all – so get ready for some fun facts we do know about the civilisation!

1.    The Mayans were mathematical pioneers

Believe it or not, we have the Mayans to thank for our concept of ‘zero’! It’s thought that the Mayan people were some of the first to work with maths at all – we have them to thanks for all those horrible lessons and homework tasks!

2.    The Mayan people’s alphabet was enormous

It’s thought that the Mayan Empire brought more than 800 different glyphs into use, making their written language one of the most complex and most fascinating. We’ve even been able to decipher books they’ve written.

3.    The Mayan Empire brought chocolate to the masses

Yes – we even have the Mayans to thank for sweet treats, too. It’s thought that early Mayans collected and fermented cocoa beans to make chocolate drink. 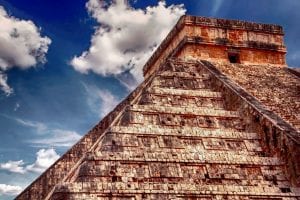 4.    In fact, the Mayan diet was pretty varied

It’s thought that the Mayan people also enjoyed drinking their own beer (chih) made from agave fruit, as well as a diet rich in honey.

5.    Did the Mayan people invent elastic?

Yes! Well – to a degree. The Mayan people are said to have created a type of stretchy, rubbery elastic from tree latex and vine juice. We wouldn’t perfect this creation until centuries down the line.

6.    The Mayan people were efficient farmers

It’s also thought that farming in the Mayan Empire was particularly trailblazing. Literally, in some cases – as they used a slash and burn technique that allowed them to effectively grow and reap maize, squash, tobacco, and beans efficiently.

The largest city in the ancient Mayan Empire was Tikal, which is said to have been home to more than 200,000 people at any one time. It even had six pyramid temples!

8.    Tikal today is a protected site

To this day, the ancient city of Tikal remains under close guard. It’s actually a UNESCO World Heritage Site, and a national park! It’s regarded by many as a genuine wonder of the ancient world.

9.    The Mayans were city builders

Tikal, of course, wasn’t the only city built by the Mayan Empire. It’s said that the Empire in fact had a hand in building more than 60 cities – though we’re not even sure they have all been discovered yet! 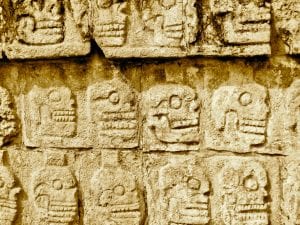 In fact, many experts believe that we are only scratching the surface as far as the Mayan civilisation is concerned. There was a ‘new’ pyramid discovered as recently as 2015, more than a millennium old!

11. Did the Mayans predict the apocalypse?

No – not only did the world not end in 2012, the whole point of the end of the Mayan calendar was that a ‘new age’ was coming. The ancient Mayans were devoted to the stars and didn’t have a concept for the end of the planet in mind.

True beauty lies within, but the ancient Mayans had particular beauty standards that would raise anyone’s eyebrows. Being cross-eyed was seen as godly, and big noses were seen as particularly attractive! 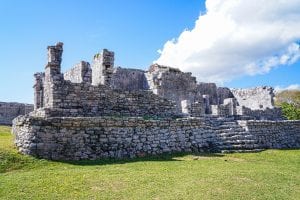 Bizarrely, the Mayan obsession over large noses was so rife that people would often craft and adopt fake noses, or nasal extensions, to live up to the ideal!

While the ancient Empire is said to have died out gradually, Mayan people still live and thrive to this day. Many live in South America, while others have emigrated to join the diaspora.

15. The Mayan concept of afterlife is… complex

Think you go to heaven or hell when you die? The Mayans had a more complex view. They believed you had multiple levels of grueling afterlife to get through before you received your ultimate reward, the paradise of Tamoanchan.

FAQs about The Mayan Empire

Where are most indigenous Mayan people living these days?

Around six million Mayan people still live in Peru, while much of the diaspora have settled in Guatemala and Mexico.

Did the Mayans have slaves?

Yes, to a degree - they had a serfdom system that meant some people worked for others and were traded.

Who were the most powerful people in the Mayan Empire?

It’s thought that priests were the most powerful people in ancient Maya - they received gifts and tributes!

Do you know any fun facts about the Mayan Empire? Share them here in the comments below!

Are you fascinated with history? Check out these interesting facts about Ancient Egypt…