Controversial in some quarters, effective in others, it is safe to say that Cuban leader Fidel Castro was nothing short of an ambitious and legendary figure – whether you supported him or opposed him. Here are some fun facts about Fidel Castro you may not be aware of!

1. When was Castro born?

In 1959, Castro became world-famous and remains so today. The reason is that he established the first communist state in the western hemisphere!

3. He had an interesting family history.

Fidel Castro’s mother was a domestic servant. His father was a sugarcane farmer. What’s more, Fidel and his 6 siblings were all born illegitimately. 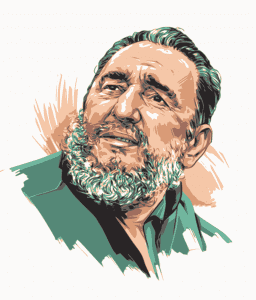 4. There was a 25-year gap between Castro’s marriages!

5. Castro was a successful lawyer who studied hard.

Fidel Castro studied at the Havana University of Law. After graduating from law school, he opened a practice in 1950.

6. He was an ambitious revolutionary who, ultimately, succeeded.

Fidel Castro was most famous for leading the Cuban revolution. Much publicity around that time showed him wearing a military-style uniform known as guerilla fatigues. He was often portrayed smoking a Cuban cigar!

He became an icon and many posters and photographs of him were and still are published today!

Castro was ambitious and sought election. He planned an uprising to despise the dictator Fulgencio Batista, who was in power. Batista, however, thwarted Castro’s plan.

8. In fact, he was jailed before he rose to power.

In 1953, Castro famously attempted to attack the Moncada army barracks, Santiago de Cuba. Castro failed in his attempt – and many of his loyal followers were killed. He was sentenced to 15 years in jail.

However, Castro was released from prison in 1955 and headed to Mexico.

9. Castro and Guevara were firm friends.

Ernsto ‘Che’ Guevara befriended Fidel. He was an Argentinian revolutionary who is just as iconic – you will likely have seen his face many times across various apparel and propaganda. 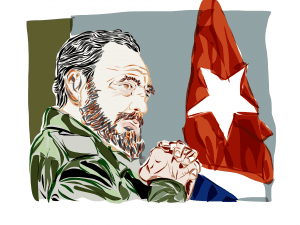 Granma was the name of the ship Castro and his allies sailed to the east coast of Cuba. Following an ambush by aggressors acting on behalf of the government, Castro and his men sought refuge in the Sierra Maestra Mountains.

11. The 60s signaled a tense time between the US and Cuba.

In 1960, Fidel Castro nationalized all US-owned businesses operating in Cuba.

12. Castro was very open about his far-left politics.

In 1961, Castro famously and publicly declared that he was both a Marxist and a Leninist. 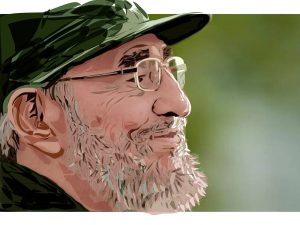 13. Eventually, the revolutionary would rule for a lifetime.

14. He considered himself one of the people.

Castro had an enigmatic personality and marketed his regime as not only its leader but as a ‘man of the people’.

Fidel Castro died in his beloved Havana, Cuba, on November 11th, 2016. His death was announced on TV by his brother Raul, who had succeeded him as leader of the party after Fidel had been compelled to step down due to ill health.

His ashes are scattered at the Santiago Ifigenia Cemetery in Cuba. 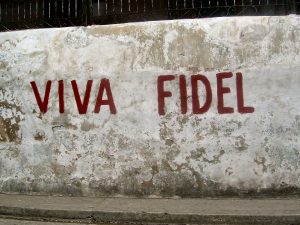 What did Fidel Castro mainly believe in?

Castro was passionate about harnessing the means of production - giving rights back to workers under a Marxist political model.

Why did the US see Cuba as a threat under Castro?

The US saw Cuba and Castro as threats mainly due to the country’s allegiance with the Soviet Union - and the Cuban Missile Crisis in 1962 exacerbated things further.

What did Castro do to Cuba?

Fidel Castro ran Cuba as a nationalist state, a one-party system under communist rule - and he generally nationalised business while in power.

Do you know any interesting or fun facts about Fidel Castro?  Share them in the comments below!

This page was last modified on December 22, 2021. Suggest an edit