Gold – it’s widely regarded as one of the most sought-after and timeless elements you’ll find on the planet. It inspired the Gold Rush, of course – and while the true monetary value of gold may increase and decrease over the years, it is safe to say that the sheen and shine of a gold piece of jewelry is always likely to be appealing. We’ve been hunting for, mining for and trading in this precious metal for centuries – here are some fun facts about gold you might not be aware of.

1. Gold hotspots are all over the place.

Gold can be found all over the world – from California to South Africa. In fact, it’s in South Africa, specifically in Witwatersrand, where you’ll find around 50% of all gold ever mined and sold comes from. Amazing!

Gold is absolutely everywhere – you just don’t realize it. There’s said to be enough at the core of the planet to coat the Earth to – get this – a depth of around one and a half feet! You’d be up to your knees in bullion!

The gold medals given away at the Olympic Games only contain around 1.3% actual, real gold. Sorry to disappoint! 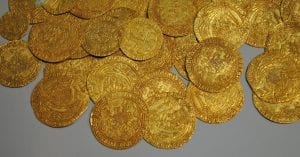 The Hand of Faith remains the biggest gold nugget still available to view. It was mined in 1980, and while it was found in Australia, it has a showcase in Las Vegas. Any guesses where? The Gold Nugget Casino!

Despite the Gold Rush having ended almost two centuries ago, there are still thousands of mines ripe with gold across the Sierra Nevada.

6. The King’s gotta have gold!

Elvis Presley was a big fan of the flashiness in gold, so much so that he had three bespoke Stutz cars made with chrome to gold replacements. Don’t step on my gold-plated accelerator!

Gold is often used to cap and modify teeth all over the world. Did you know, however, that it’s said to have been in practice for four millennia? Archaeologists are stunned to have found human remains with evidence of capping going back to 2,000 BC at least.

Believe it or not, Apple has been able to derive more than 2,200lbs of pure gold just from melting down old iPhones. To you and I, that’s $40 million in the bank!

There’s gold down deep in the oceans – about 20 million tons of it, to be precise! 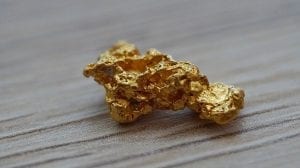 Pure gold isn’t the hard, robust metal you’ll see in bars and bullion. In fact, it’s very soft – and can be molded into shapes!

Gold bars can weigh incredible amounts – the biggest in existence today weighs in at a hefty 551 lbs – you’d need a bit of help getting that into the vault!

Gold is actually pretty good at conducting heat. However, copper tends to be the best at this – and it’s much cheaper, in any case!

The sun itself, believe it or not, actually contains gold! While no one’s been up there to check it (or mine it), it’s said that up to six ten billionths (a complex fraction!) is pure gold. That might sound minute, but given the size of the sun, it’s still likely to be impressive. 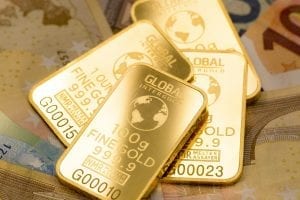 How much is gold worth?

That really can vary from day to day! At present, for example, it’s said to be worth around $58,000 per kg.

Why is gold called ‘Au’ in the periodic table?

The name ‘Au’ comes from Latin and Anglo-Saxon - ‘aurum’ was a word that was used to describe it centuries ago.

When was gold first discovered?

Gold is thought to have first been unearthed or mined millennia ago - around 3,000 BC, in fact!

Do you know any fun facts about gold? Share them in the comments below!

This page was last modified on March 3, 2022. Suggest an edit