The UK loves Indian food – and while many people will say that you can’t beat the authentic cuisine you actually try on the streets of New Delhi itself, it’s safe to say that the culinary creations from out East always seem to go down a treat in the West. There seems to be an unlimited number of flavor combinations and recipes out there – is there anyone who can seriously say that they have tried everything off the menu?

While there are plenty of staple ingredients in many Indian dishes – such as chili and potatoes – they actually originated elsewhere in the world. Potatoes, in particular, only ever made their way to India via Portugal.

2. Naan bread’s not Indian, either!

Similarly, naan – the popular traditional bread served with Indian cuisine – is actually Persian. It’s intriguing to see which bits and pieces were brought into the cuisine from elsewhere in the world!

3. How do you balance all that spice?

There’s a specific theory based around Indian food which claims that the cuisine should always play to six different types of flavor and sensation. Specifically, Indian cuisine is thought to be sour, spicy, salty, sweet, astringent, and bitter. In fact, the best dishes are thought to balance all six in careful measure! 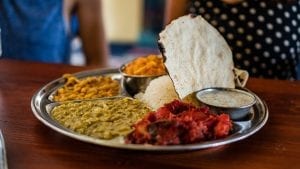 Chicken Tikka Masala is likely to be a popular curry dish in many Indian restaurants in the UK. However, it actually has roots in Scotland, as a national take on Indian cuisine.

5. India is the world’s spice capital.

India is thought to produce more spices than many other territories worldwide. That’s because it’s said to be responsible for exporting at least 70% of the spice you will generally find in supermarkets and in dishes you’ll taste worldwide. That explains why some Indian dishes are so spicy!

While there are many Indian dishes that include meat as a main staple, the country is well-known for being largely vegetarian. In fact, India is only second in the world when it comes to meatless consumption per capita. That said, statistics show that only 29% of Indian citizens are actually strictly vegetarian. The misnomer over Indian people largely favoring vegetable dishes may stem from the cow being seen as a sacred animal in many corners.

7. Rice is a big part of Indian cuisine.

It’s safe to say that Indian food would probably be a lot different were it not for rice. It is one of the most commonly-consumed foodstuffs in the country full stop – to the extent where there are even types of rice used for breakfast. We’re not referring to rice krispies here, of course, but rice such as ponni. You will normally find basmati and pilau rice used in many Indian dishes in the UK.

There’s also a three-category system for Indian food inside the country. These categories are Taamsic, Raajsic and Saatvic. It’s thought that Taamsic food revolves around meat and alcohol, Raajsic refers to oilier and spicier food, while Saatvic tends to be the freshest, revolving around vegetables. Many believe Saatvic food to offer a kind of enlightenment!

The UK’s taste for curry dates back centuries. India and the UK have strong links – to the extent where the very first Indian restaurant opened up in the country all the way back in 1809. Since then, over 9,000 different Indian restaurants have opened up nationwide, many independent, and some belonging to specific chains.

9. India was using salt and pepper before most of us.

Salt is, of course, a staple in much cooking East and West. However, it’s thought that India has been cooking with both salt and pepper since 5,000 BC. Even longer than that, it’s said that the Indian diet has played host to rice and lentils since at least 6,000 BC, making them a genuine staple. 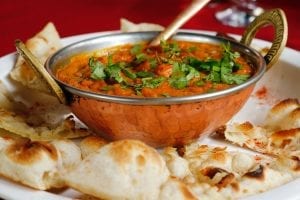 10. But it’s not always about salt and spice!

Indian food is famous for its sweetness and its dessert stylings, too – and it’s thought that Indian sugarcane was commonly used and consumed from around the 5th Century. The name of the juice of the cane – khanda – is actually where the word ‘candy’ comes from, believe it or not!

It’s thought that the Biryani remains the most popular dish to come from India - a chicken and rice based classic.

What makes Indian food so tasty?

Not always - but some dishes are high in carbohydrates, oils and sugar.

Do you know any fun facts about Indian food? Share them in the comments below!