Known for being one of the most important routes connecting the east to the west in the US during pioneer times, the Oregon Trail has a rich and fascinating history. So, let’s dive into nine fun facts about the Oregon Trail to clue you in to how it all went down!

The entire length of the Oregon Trail was over 2,000 miles long! It was believed that a pioneer would take between four to six months to complete the trail, and that was with proper planning. Definitely not a place you’d want to walk in uncomfortable shoes!

Due to the sheer volume of items that traveled with adventurers across the Oregon Trail, plenty of things got left behind. An entire industry was born of frontier trading posts that supplied food and other essentials for travelers on their long journey. In some of the most popular areas, merchants used to con families into buying way more than they needed, thus making a fortune.

However, these families, unable to take all of the extra load the entire way, would dump them. The trail then became home to plenty of abandoned food barrels, clothes, books, and even furniture and wagon parts! 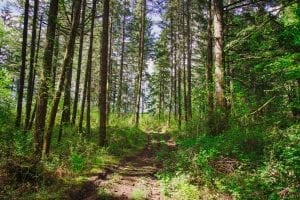 While Native Americans rarely caused harm to pioneers, travelers did face a lot of death-defying moments on the Oregon Trail. Their main issue was cholera, although other deadly diseases did reverberate. It is believed that about 20,000 deaths on the Oregon Trail were caused by serious diseases of the time. There was a time when there were graves on every mile of the trail to mark those who had passed along the way.

Sadly, most of the pioneers that set out on the Oregon Trail did not actually make it to Oregon. Instead, only about 80,000 out of 400,000 completed the trail. While many died along the route, others settled in Idaho, Wyoming, or veered off to Utah or California.

6. Quite the site for graffiti!

Back in the day, many pioneers left messages  (such as their names, hometowns, travel dates, and so on) on the stone landmarks that they passed, such as Register Hill and Names Rock. You might have even heard of the Independence Rock. At the time, it was also known as The Register of the Desert, as thousands and thousands of people left their traces on the rock.

One crossing over the Oregon Trail should be enough for any one person, but one man had a different plan! A famous pioneer named Ezra Meeker decided to take on the trail more than once and in more than just one way!

8. You can still see tracks in the ground from the pioneers!

If you are interested in seeing where some of our ancestors traveled, then look no further than the Oregon Trail. In certain parts of the trail, you can still see wheel ruts from all of those years ago. In fact, they are still visible in all six states that the Oregon Trail traveled through.

Although the Oregon Trail is famous, it is important to note that it did not follow just one road. In fact, there are paths leading west that can be observed leading off of the main trail.

Of course, once the transcontinental railroad was built, everything changed. However, before that time, the Oregon Trail was famous for connecting the east to the west. 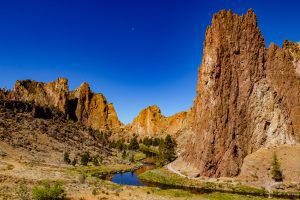 FAQs about The Oregon Trail

When was the Oregon Trail first established?

It is believed that the trail dates back to about 1841 when the first emigrant party left Independence with about 80 people.

Why did people need to travel west?

Different people had different reasons for taking on the trail, but mostly it was to escape the economic depression, Civil War, and religious missions.

What equipment did pioneers take with them on the trip?

In order to take on the Oregon Trail, pioneers would often carry food, guidebooks, articles, and even tips from family members and friends on how to approach the journey.

Do you know any fun facts about the Oregon Trail?  Share them in the comments below!